Classic Media has released a curious collection, The Best of Rocky and Bullwinkle: Volume 2 that should puzzle fans of the landmark, subversive cartoon from the early 1960s. If you're at all familiar with the original series, you know that over several half-hour episodes, a central Rocky and Bullwinkle story arc would play out in cliffhanger fashion, with these segments wrapped by individual bumper segments of other short cartoons, such as Dudley Do-Right, Fractured Fairy Tales, and Peabody's Improbable History. For The Best of Rocky and Bullwinkle: Volume 2, all of the additional shorts that wrapped around the Rocky and Bullwinkle stories has been eliminated, giving the viewer three complete adventures, without interruption, of that famous flying squirrel and that dim-witted moose. 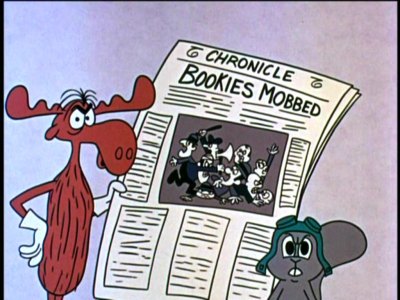 Fans of the original NBC series, The Bullwinkle Show, which ran from 1961 to 1964 (first on Sunday nights for only one year, then Sunday afternoons, and then on Saturday mornings from 1962 to 1964) weren't too pleased with the complete first season DVD set, because the producers substituted the original opening credits with a different season's one, along with employing the syndicated title opening, The Adventures of Rocky and Bullwinkle and Friends. Granted, the original elements of the famed NBC version (there was an earlier ABC version, Rocky and His Friends, that use to air on their afternoon schedule in 1959-1960) have been sliced and diced for years in syndication. But animation buffs and historians, particularly with the advent of DVD, which was touted as the format that would aid restoration of movies and TV shows, want these classic series presented as closely as possible to the original broadcast versions.

Which is why I'm not too sure what the point of The Best of Rocky and Bullwinkle: Volume 2 is. Of course, it's great to see the central "Mooseansquirrel" story arcs, but why do they need to be separated from the other cartoon elements? The implication is that somehow, they'll play better, or that the viewer will "finally" appreciate them more, sans Mr. Peabody and Dudley Do-Right. I disagree. The whole point of the original Bullwinkle Show was the variety aspect of its composition. The trademark of creator and writers Jay Ward and Bill Scott - the rapid-fire, machine-gun social and cultural satire, and the hilariously bad puns - was amplified by the fact that the show kept careening around from one cartoon segment to the next. The frenetic pace of the show was maintained and underscored by this constant switching back and forth, particularly with the Rocky and Bullwinkle segments that relied on the cliffhanger format. 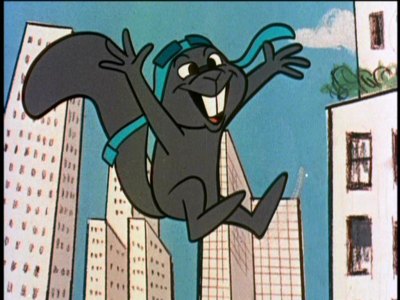 Separating out those other cartoon elements doesn't make much sense to me, particularly when the other segments were just as funny in many cases, as the Rocky and Bullwinkle material. As well, since the previous three seasons have already been put out on DVD, in (relatively) complete fashion, what's the point of issuing three altered storylines from Season Four (and they didn't even put them in air date order)? Why not just release the complete Season Four on DVD, with the episodes intact? We can all hit the fast forward button on the remote if we just want the R & B segments - although I think most loyal fans of the series want precisely the opposite of that experience. They want the complete, intact episodes. The Best of Rocky and Bullwinkle: Volume 2 is the kind of DVD "best ofs" and compilations that drive DVD collectors up the wall. They're essentially unnecessary.

That being said, if you like the idea of just watching the Bullwinkle and Rocky storylines, I suppose you'll enjoy The Best of Rocky and Bullwinkle: Volume 2. Three complete storylines are included here: Wossamotta U, Treasure of Monte Zoom, and Goof Gas Attack. If you haven't seen the series since you were a kid, you'll be amazed at how well the humor holds up. I know it's popular to label The Bullwinkle Show as one of the smartest, hippest cartoons to ever hit television, but the quality of the writing and the sheer manic energy conveyed by Ward and Scott's delightfully smart-assed sensibilities makes the series one of the funniest TV shows period - animation and live-action included.

Coming from that deeply influential period in American humor, when it was cool to be smart and intelligent and hip, while spoofing traditional conventions for the sake of scoring a cheap shot, The Bullwinkle Show's subversive humor fits in nicely with all the other movements of American comedy that were bursting out at the seams during the late 50s and early 60s. This was the world of American comedy where the button-down mind of Bob Newhart co-existed comfortably with the nasty honesty of Lenny Bruce. Where Stan Freberg lampooned the American media with the same fervor that the lunatics over at Mad Magazine pursued. That utterly American, wise-ass humor that has taken many forms over our centuries, from Twain to Family Guy, had a Madison Avenue gloss during The Bullwinkle Show time period, when the smartest, coolest comedy team out there was the dry, collegiate, New York hipster stylings of Mike Nichols and Elaine May. Sure, The Bullwinkle Show went for the lowest form of humor: the pun. But they're brilliant puns, and the social satire mixed with endearingly silly plays-on-words that can be found in every episode, would not seem out of place in a typical Nichols and May routine (in Treasure of Monte Zoom, Bullwinkle explains what an A-Bomb is: Bullwinkle: "A-Bomb is what some people call our program." Rocky: "I don't think that's funny." Bullwinkle: "Neither do they, apparently"). 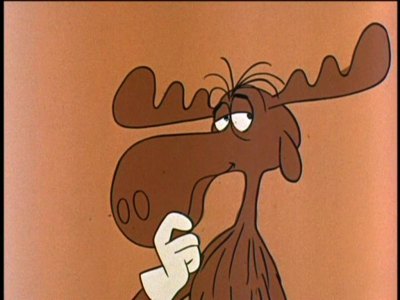 WOSSAMOTTA U
The struggling football team at Wossamotta U recruits Bullwinkle J. Moose as their star player. As he starts to bring the losing team to the top, Boris and Natasha scheme a way to fix the game for big money. In a grueling and tense final game, Wossamotta faces its biggest rival yet, the Mud City Manglers, a team of vicious thieves disguised as girls. Can Wossamotta U score the winning touchdown?

TREASURE OF MONTE ZOOM
Boris and Natasha are out to find the hidden "Treasure of Monte Zoom," and will do anything to get to it, including blow up the town dam. Boris tricks Bullwinkle into helping him and he and Natasha end up stealing the treasure. It's up to our heroes to make sure they don't get very far.

GOOF GAS ATTACK
All of the top scientific minds in the country are suddenly stricken with a bout of stupidity! Pottsylvania is attacking with a secret weapon called Goof Gas. Rocky and Bullwinkle are called in to save the day. But when Rocky suffers a Goof Gas Attack and can't think straight, it's up to Bullwinkle to save the country! 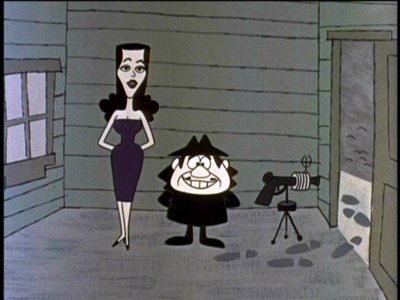 The Video:
The full screen, 1.33:1 video image for The Best of Rocky and Bullwinkle: Volume 2 is quite good, considering that the original elements from day one were compromised (the Mexican cartoon studio that Jay Ward purchased to outsource the animation was notoriously slipshod, giving the series an inadvertently funny, rough-and-tumble look). Fans will not like seeing that "RB" watermark again at the bottom right corner of the image.

The Extras:
A collection of filmed intros to the original The Bullwinkle Show are included here, with Bill Scott voicing the Bullwinkle puppet. These have been included on other sets, and they're not even related to this season of cartoons (the puppet intros were dropped early in the first year), so it's not much of an extra.