The Criterion Collection // Unrated // November 27, 2007
List Price: $39.95 [Buy now and save at Amazon]
Review by Stuart Galbraith IV | posted November 13, 2007 | E-mail the Author
It's easy to both over- and underestimate the impact Akira Kurosawa's Drunken Angel (Yoidore tenshi, 1948). The director himself said it was the first film where he truly had found his filmmaking voice, his style. Kurosawa had directed six features prior to this, along with portions of a few others, but those films had been subject to meddling of one sort or another, first at the hands of Japan's militarist censors during the war, and later by both the Occupation Forces and Toho's powerful postwar labor unions. By this point, however, Kurosawa's successes both critically and at the box office (still at this point limited to a domestic income) had earned him a freedom to pretty much do things his way. 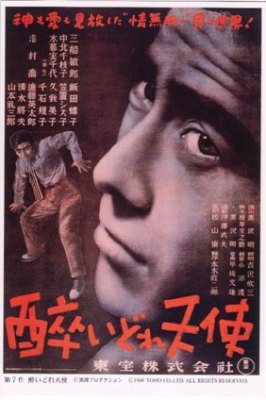 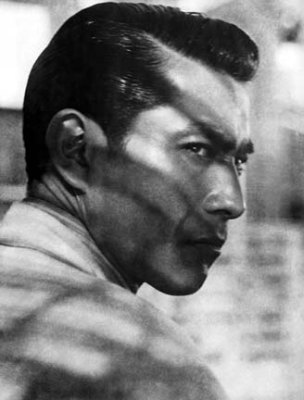 The movie is about the contentious relationship between a sanctimonious, alcoholic slum doctor, Sanada (Takashi Shimura, later to star in Kurosawa's Ikiru and Seven Samurai) and a cocky, volatile gangster, Matsunaga (Toshiro Mifune), in denial about his precarious health: he has advanced tuberculosis.

Sanada is gruff and abrasive; his alcoholism has rendered him virtually fearless in his dealings with gangsters like Matsunaga. He's outwardly pessimistic but driven by an innate passion to cure his patients, even if it means badgering and berating them. Matsunaga is the kind of two-bit punk one sees all over the world and which still exists virtually unchanged even today: he struts around his turf with the self-importance of a peacock. But his tough talk can't hide an extreme naivete, and his undoing is as much a result of his puerile notions of yakuza loyalty as his T.B. When an old boss, Okada (Reisaburo Yamamoto, superb in an easily overlooked performance), is released from prison and comes back to reclaim his old territory, sycophantic Matsunaga feels compelled to drink and party with the old man, the very things that will exacerbate his condition. Then again it may be something else, that in finally confronting Okada for the wrongs he's done him, Matsunaga is confronting the one fear that humanizes him: death.

The film was, significantly, the first to team Akira Kurosawa with Toshiro Mifune, a director-actor relationship as monumental as Ford and Wayne, Bergman and von Sydow, Truffaut and Leaud, Scorsese and De Niro. Mifune was just 27 when this was made; he had virtually no acting experience and had made just two films before this. His sensational debut, in Senkichi Taniguchi's Snow Trail (Ginrei no hate, 1947) had been co-written by Kurosawa, and Mifune and Takashi Shimura played similar (if less sympathetic in Mifune's case) parts. (Snow Trail has never been released in any English-speaking country and exhibited only a handful of times. It's as good as Drunken Angel and Stray Dog and really deserves to be picked up by Criterion or some other label.)

Kurosawa was awed by Mifune's raw, instinctive talent; in one of the featurettes, he tells of a drunk scene so authentic it actually frightened actress Choko Iida. It's a performance largely without shading but that's okay - Matsunaga's supposed to be an exaggerated tough guy, determined to fit the stereotype even it it kills him. Takashi Shimura belongs to that category of busy and versatile character actors who almost never gave a bad performance: Claude Rains, Peter Cushing, Philippe Noiret. An obvious attempt is made to hide his naturally warm features by giving him a three-day beard and jutting eyebrows that suggest Hugh Griffith. It's a marvelously humanist but not sentimental performance, and Shimura's scenes with Mifune are so riveting Kurosawa is content to let them play out in long takes from standard angles.

The film is also significant in that it marked the first collaboration between Kurosawa and composer Fumio Hayasaka, and their innovative use of ambient music and sound effects to comment (often ironically) on the action. Hayasaka became Kurosawa's regular composer until the former's premature death in 1955, coincidentally from T.B.

In the end Drunken Angel is no more or less than a superb (two-)character study with a strong sense of time and place. Looking at One Wonderful Sunday (1947), this and Stray Dog (1949), the films play almost like a trilogy of portraits of early postwar life in a country struggling to find its new identity, but with no clear idea of what lies ahead.

Criterion notes that Drunken Angel's film elements "survive in a considerably degraded condition" but the film looks better than this writer's ever seen it, and it is about on par with other early postwar films, all of which were shot on nitrate stock and stored in less than ideal conditions. A master positive was used and both it and the mono soundtrack have been substantially scrubbed digitally. Viewers with widescreen TVs will be disappointed that the entire film is slightly windowboxed, but this seems less extreme than earlier Criterion releases. The Dolby Digital 1.0 mono has been directed to the center channel.

Supplements include an excellent audio commentary by Donald Richie. Richie is certainly qualified, more than any native English-speaker: Richie became friends with composer Fumio Hayasaka around this time, and visited the set of Drunken Angel 60 years ago. It's a terrific track.

The main featurette is a carryover from the Region 2/NTSC Toho DVD, a 31-minute full-frame documentary on the film that was part of Toho's Akira Kurosawa: It Is Wonderful to Create series. It offers a nice overview of the film's production, and includes interviews with assistant art director Yoshiro Muraki (wearing a Guns'n'Roses t-shirt!), set decorator Koichi Kamada, sound effects engineer Ichiro Minawa, and Shiro Mifune, first son of Toshiro. (Kurosawa's future script supervisor/creative consultant Teruyo Nogami can be heard off-camera, reacting to various statements; she directed the featurette.)

Kurosawa and the Censors is an original documentary, running 25 minutes in enhanced 16:9 widescreen. It consists of an interview with scholar Lars-Martin Sorensen, who discusses the filmmaking restrictions placed on Japanese filmmakers by their western occupiers. The documents shown and the historical information conveyed by Sorensen is fascinating, but much of the featurette has him making the case that Drunken Angel is in large measure an expression of Kurosawa's "hostile" anti-occupation/anti-western views. Sorensen's evidence for this is awfully thin: he points to the westernized nightclub with its Romanized neon signs and "Jungle Boogie," Okada's switch from traditional Japanese clothes (Sorensen calls it a yukata and a haramaki; actually he's wearing a men's kimono with its accompanying obi) to typically western yakuza wear. He also implies Sanada's statement about yakuza notions of feudalism being on the way out was written into the picture solely to please Occupation censors, though he offers no evidence to support this. While it's true that the change in Okada's wardrobe suggests a shift from pre-war yakuza traditions to postwar ones, most of Sorensen's examples merely are a reflection of the period in which the film was made. Kurosawa's shows us a western-influenced nightclub because such clubs and its music, the fashions of its patrons, etc. were the style of the time, and similar images turn up in Japanese movies of all kinds well into the 1960s and beyond.

As Ian Buruma points out in his essay that's part of a 28-page booklet included with the DVD, "foreigners are irrelevant to Kurosawa's story....And relationships interested Kurosawa more than political messages." Also included in the booklet are excerpts from Kurosawa's Something Like an Autobiography.

Drunken Angel holds up extremely well, even if what once was fascinating for its timeliness has now become fascinating for its historical value. It's Kurosawa at the summit of the most productive, most acclaimed phase of his long career, and beginning with Drunken Angel, Toshiro Mifune is along for the ride. A DVD Talk Collector Series title.