I have to admit that when I saw a new version of Last Days of Pompeii, released in Region 2, on the screener list, I jumped on it.  I assumed it was one of the silent versions of the movie.  I was a little surprised when it turned out to be the 1984 mini-series that was shown on ABC.  Is there really that much of a market for American TV series in Europe?  Apparently.

In any case I popped the disc into the player and sat down to see what this show was all about.  I was in college when it first aired and the only TV I made time for was Hill Street Blues, so I missed the original broadcast.  Still, I enjoy long movies and spectacles are always fun, I figured this could be enjoyable.  Well, it was to a point.  The production is certainly grand with an all star cast and a huge budget for what boils down to be a made-for-TV movie.  Ultimately it is weighed down by its own excesses and though the cast does a good job this TV event plays out like an upscale soap opera. 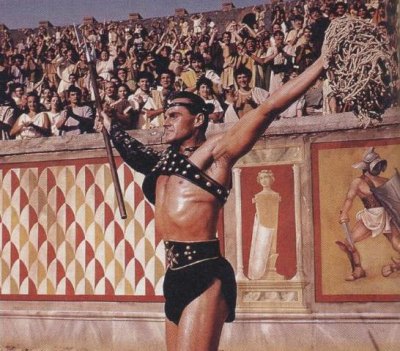 Based on the novel by Edward Bulwer-Lytton printed in 1835, this Victorian era romance story is filled with a myriad of characters who populate the Italian city of Pompeii just before the eruption of Mt. Vesuvius, which caused its famous destruction in the year 79 AD.  Playing out over four hours, this is the tale of the Athenian Glaucus (Nicholas Clay), who is in love with Ione (Olivia Hussey), a ward of Arbaces (Franco Nero), the Egyptian priest who is using the Temple of Isis for his own advancement.  Arbaces is after the money that Ione (and her brother Antonius (Benedict Taylor)) possess, and devises a Machiavellian scheme to get it.

But wait!  There's more.  The hunky gladiator Lydon (Duncan Regehr) risks his life in the games but is in love with the blind slave girl Nydia (Linda Purl), but unfortunately she's really in love with Glaucus.  Meanwhile the poet Claudius (Gerry Sundquist) has a thing for Juila (Catriona MacColl) but he thinks she's in love with Glaucus, even though she isn't.

Diomed (Ned Beatty) is a nuvo-riche merchant of common background who has the gall to consider running for political office against the city magistrate Quintus (Anthony Quayle).  What Roman historical epic would be complete without persecuted Christians too?  This one has Olinthus (Brian Blessed) as the leader of the persecuted group.  His flock contains Chloe (Lesley-Anne Down) a Christian prostitute and the slave that loves her Petrus (Malcolm Jamieson).  Whew.

If the plot sounds convoluted, confusing, and muddled, that's only because it is.  Screenplay writer Carmen Culver was pretty much between a rock and a hard place when it came to adapting this novel.  There's only so much you can do with a Victorian era historical romance and still stay true to the source material.  Edward Bulwer-Lytton, when read today, isn't exactly exciting.  He's most famously remembered for the opening sentence to his novel Paul Clifford, which begins "It was a dark and stormy night" and has been immortalized by the annual "Bulwer-Lytton Fiction Contest" which gives an award for the "opening sentence of the worst of all possible novels." Culver tried, but the result is a bloated, stiff, and melodramatic mess with some horrible dialog that sinks beneath its own weight.

The stereo soundtrack, in the original English or a German dub (which is the default on this German release) is adequate.  The range is very limited, especially the bass, and the destruction at the end sounds very anemic and weak.  The dialog is fine.  This sounds about par for an unrestored TV special from the mid 80's.

The full frame image is also about average.  The picture is soft but the colors aren't faded though they aren't particularly vibrant either.  The print used is a bit rough though.  There are spots and scratches throughout the film and while it's never distracting it is a common occurrence.

The only extra is a 50 minute documentary of the film.  This is in German without subtitles, so I can't comment on its quality.

This $19 million spectacle fails because of its huge scale.  Instead of paring the story down to its elements, the sprawling story is bloated and it has a leaden pace.  Though many of the actors do a fine job, they can't overcome the wooden, and often unintentionally hilarious, dialog.  If you have fond memories of this show from when it was first aired in 1984, it would be worth a rental, but prepare to be surprised at how poorly it has aged.