There is no doubt that the history behind Francis Girod's Le Trio Infernal is as fascinating as is the film itself. Vehemently criticized, butchered by the censors, and eventually labeled by moralist watchdogs "the worst of Romy Schneider's films" this truly is a piece of cinema whose message instigated a reaction only a few other films managed to match during the early 70s.

The story of Le Trio Infernal focuses on the deeds of a famous Marseille lawyer (Piccoli) and his two lovers (Schneider and Gonska) who decide to make a fortune by cheating the French life insurance industry. As expected the bulk of the film follows the three-stage scheme mapped out by the trio: locating a target, entering the target's world, and executing. In between the criminals indulge in passionate sexual games which Girod uses as a perfect excuse to slam everything bourgeois. With the political overtone obviously a factor here the sexual decadence is that much more impressive given the fact that the lawyer's lovers are sisters.

The pivotal point in this film is the murder of an unsuspecting couple on Christmas Eve. The three protagonists are seen cutting their victims in pieces and placing them in baths full of acid for a couple of days. Then, in an impressively graphic manner, the decomposed bodies are carried with large buckets to a nearby dumpster. The view is repulsive and necessitating great stoic power.

Le Trio Infernal however isn't as far fetching as Marco Ferreri's La Grande Bouffe (another Piccoli classic) is. Once the trio's agenda takes a downturn the story becomes much more intimate, devoid of shocking imagery. As if intentionally allowing the viewer to experience the downside of quick success Le Trio Infernal becomes more philosophic than entertaining. It all works rather well thanks to the main protagonists' impressive moral degradation.

Piccoli, Schneider, and Gonska are brilliant. The pretentious finesse in their actions obviously assists pic's political agenda. Yet, the gruesome details Girod does not shy away from provide quite a bizarre feel to what would have otherwise been a fairly straightforward satire. 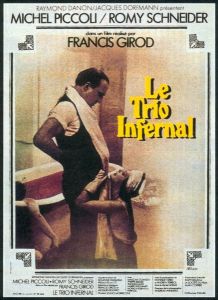 Technically pic is just as successful. The pacing of the story is consistent and without any notable gaps - once the trio embarks on their vile mission Girod makes sure that the viewer never takes a breather. Far more importantly, when the stylish black humor becomes excessive Piccoli and Schneider quickly restore the balance with their provocative sarcasm. As a result Le Trio Infernal is likely to appeal to those who enjoy arthouse films as well as those who are simply looking for a temporary escape from the ordinary.

German label New Entertainment World have provided an uncut print of this film in an aspect ratio of 1.78:1 (print is enhanced for widescreen TVs). This being said, the disc appears to have been sourced from an analog master in a fairly good condition. Given the cult status this film enjoys as well as the fact that an uncut version is practically impossible to locate I am not disappointed with the result: contrast is slightly above average with only a few minor inconsistencies, colors are well reproduced, while disturbing flickering or edge enhancement aren't a major of concern. Some scratches and dirt pop up occasionally but they should not detract from your viewing experience. To sum it all up you shall be gravely disappointed if you expect to encounter a glossy, digitally-restored, image quality. Yet, if you take into consideration how this film has been treated and the lack of a decent print in any region then I believe that the treatment the German distrib offers could be quite adequate. What is important here is that you understand what elements were available for the distrib to operate with. PAL-encoded, Region 2.

The disc arrives with two audio tracks: a German DD 2.0 track and a French DD 2.0 track. The French track is the one most commonly used for this film (the German dub appears to be preferred in Germany and referred to as "official"). Optional German, English, and Spanish subtitles are present. Dialog is fairly easy to follow and while there aren't any impressive audio treats here I believe that it would have been nice if we had a more elaborate mix to benefit from. This being said the rest of the audio treatment is adequate enough.

In addition to a French and German theatrical trailers as well as a gallery of stills this disc also offers the actual soundtrack to the film. A very nice touch indeed.

Limited to only 999 copies this rare German disc is indeed quite the treasure. I have been trying to locate a decent copy of Le Trio Infernal for quite some time now and suffice to say I am more than pleased with what I have in my hands (the French disc isn't English friendly). Admittedly, the disc does not hold up well to the standards we apply to current DVDs but the realist in me tells me that I must be thankful to have an English-friendly release to begin with. And I am. This is a fabulously designed collector's piece which most cinema lovers would want to add to their collections. Recommended.

This review was made possible with kind assistance of Xploited Cinema.