12-year old Vitus (Fabrizio Borsani/ Teo Gheorghiu) is far ahead of his classmates, he knows the answer to every question the teachers ask, he understands the world better than his parents do, he plays the piano. And expectations in the family run high - Vitus' mother (Julika Jenkins) is convinced that her son will be a renowned pianist.

The only one who appears to understand the boy's world however is his grandfather (Bruno Ganz). He encourages Vitus to follow his heart...and the boy does just that. With a pair of handmade wings Vitus jumps off the balcony of his home.

Pic's seemingly predictable progression is far more complicated, at times notably deceiving. The boy's wrongdoings become less and less logical in the eyes of those who share his world yet seen through Murer's camera they are nothing short of magical. Still, it takes a pair of wings to explain what initially seems unexplainable.

Whether or not one agrees with Murer's decoding of the boy's world is the key to enjoying this film. A lot of what takes place during the second half promotes the idea that adults are far less capable of fighting for their dreams, lacking the passion to pursue an ideal. They are also more likely to become victims of their own failures and eventually lose the support of those who believe in them. 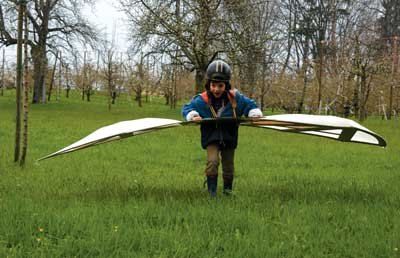 Pic offers a variety of panoramic shots, at times glossed over to perfection, to enhance the idyllic world Vitus belongs to. The scenes at the local airport are incredibly well composed and in sync with the boy's struggle to escape reality - bright colors have a special role. On the contrary Murer and his camera are tellingly static when Vitus follows the words of his parents.

The classical soundtrack is top notch offering a colorful mix of works by Bach, Ravel, Scarlatti, Liszt, and Shuman.

Presented in its original aspect ratio of 1.85:1 and enhanced for widescreen TVs Vitus offers a heavy amount of grain, often to a point where even the color-scheme appears affected by it. All throughout the film there is a substantial amount of digital noise which many will more than likely find inadequate for such a recent film. During daylight scenes contrast is also less than impressive and I could not come to terms with how the film looked on my TV set. On a positive side however I did not detect any scratches, debris, or intrusive marks.

The film arrives with a mix of German (Swiss) and English in DD 5.1 and 2.0 tracks. As noted in the review the soundtrack is of tremendous importance and I am glad to report that its overall quality is solid. The classical tunes are crystal clear and very well mixed with the supporting dialog. The disc offers optional English, French, and Spanish subtitles.

In addition to seven deleted scenes, a long interview with Bruno Ganz, a standard Making Of, and a screen test with Teo Gheorghiu, there is an interesting but rather challenging commentary by Fredi M. Murer. It seems like most of the comments here are quite chaotic and lacking the precision I was expecting them to deliver (note: a lot of the character remarks feel too generic and hardly addressing the complex emotions the main protagonist struggles with). The "interesting" part for me was the technical dissection of the piano performances.

I took my time with this film and in fact saw it twice during the last two weeks. I liked it better the second time around. My unwillingness to write a review immediately has to do with the fact that a lot of what Bruno Ganz's character is meant to deliver is far too subtle, perhaps hidden too deep behind the obvious. In fact, if I may suggest so, take an unconventional approach to this film and pay closer attention to Bruno Ganz and the character he plays. I assure you he is just as good of a reason to see Vitus as is the young prodigy.