Horror Rises from the Tomb

BCI Eclipse // Unrated // November 13, 2007
List Price: $19.98 [Buy now and save at Amazon]
Review by Stuart Galbraith IV | posted December 16, 2007 | E-mail the Author
For more than a quarter century, the horror films of Spaniard Paul Naschy (a.k.a. Jacinto Molina) were next to impossible to see in America, despite being written about extensively in books and magazines about horror cinema. Over the last decade, however, Naschy's films have been turning up on DVD, and in recent years Naschy himself has even flown to America to put in appearances at a few conventions. The result is that, somewhat belatedly, Naschy has become something a cult figure, deservedly so, among horror film fans. The actor-screenwriter and sometime director is incredibly likeable; he himself was a fan of Universal's horror films of the 1930s and '40s (especially Frankenstein meets the Wolfman, a major influence on his own career), and this affection was carried over into his productions, which now have fans of their own.

Anchor Bay released several 16:9 enhanced Naschy titles about five years ago, but recently BCI Eclipse/Deimos Entertainment have picked up the gauntlet with a steady stream of "Spanish Horror Collection" releases. A few of these were disappointingly full-frame, but the best ones have the older Anchor Bay titles beat in terms transfers and extras. Horror Rises from the Tomb (El Espanto surge de la tumba, 1973) is perhaps their best release yet overall, though like most of Naschy's films, it's a mixed bag of effective set pieces and incoherent storytelling. 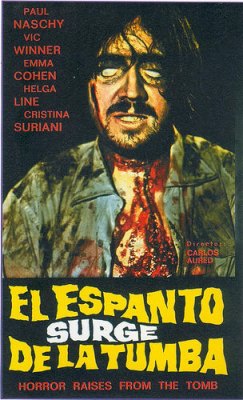 In 1454 France warlock Alaric de Marnac (Naschy), who feasted on human flesh, is beheaded for his witchcraft, along with mistress-witch Mabille De Lancre (Helga Line), he cursing the descendants of their executioners: Alaric's brother Armand (also Naschy) and Andre Roland (Victor Barrera).

In present day Paris, wealthy and arrogant Hugo de Marnac (Naschy again) and his girlfriend, Sylvia (Betsabe Ruiz), along with their friends Maurice Roland (also Victor Barrera) and his girl Pauline attend a seance in which the cackling ghost of Alaric puts in an appearance, though Hugo believes the medium to be a phony (a "doubting Tomas?"). This prompts the foursome to visit Hugo's remote chateaux deep in the mountains, to see if they can find Alaric's remains: a head and body buried secretly and separately on his estate.

On their way, the group is attacked by would-be highwaymen/carjackers, which in turn are captured and promptly murdered by vigilantes...who greedily take note of Hugo's ostentatious bankroll. Once at the decaying mansion, the story is further cluttered with rumors of buried treasure hidden away somewhere on the estate, while Hugo resumes an affair with Elvira (Emma Cohen), the caretaker's daughter.

Things really get confused when the ghosts of Alaric and Mabille turn up and begin possessing and/or killing the principals. The vigilantes turn up to steal Hugo's bankroll and find the treasure, while the ghosts also slip into town for more killings. Pretty soon the estate is overrun with white-eyed zombies, vengeful medieval ghost-vampires-cannibals, possessed mortals, and sickle-brandishing backwoods killers.

Naschy admitted later that he wrote the film in a day and a half - and it shows. This lack of coherence in favor of colorful if disconnected horror set pieces is common to the majority of Naschy's films. So too is the basic set-up: an age-old curse threatening present-day descendants in a remote castle/mansion setting. This jumble of ideas is so disjointed one is better off not trying to follow the narrative too closely.

The horror set pieces, on the other hand, are by 1973 standards quite gory with excellent make-up effects. The effectively moody opening sequence, obviously influenced by Witchfinder General, features a well-staged decapitation, making good use of a wax head of Naschy. The creepy if utterly gratuitous zombie sequence is like a cross between the best elements of George Romero's Night of the Living Dead and the made-in-Spain Horror Express. The protracted but audaciously Grand Gignol climax is similarly effective.

This uncut version of the film is rife with nudity (apparently this was for European markets other than Spain) and the women all wear sheer, Roger Vadim/Jane Fonda-esque nighties, this despite the fact the film takes place in an unheated mansion tucked away in snow-covered mountains.

Previous released to DVD in inferior versions erroneously assumed to be in the public domain, this new, authorized released was transferred from the original negative in a razor-sharp 16:9 transfer with outstanding color, adapted to 1.78:1 from its original 1.66:1 screen shape. The Castilian Spanish track is a bit cleaner than the English one overall, though the dialogue is a little harsh compared to the English-dubbed track, which actually isn't bad at all (both are mono). The subtitles use an odd font: black lettering with a white border, but it's okay.

Naschy provides a spirited introduction that precedes the feature, and along with director Carlos Aured is interviewed in an audio commentary track in Spanish with English subtitles, moderated by Angel Gomez Rivero. The audio here is not good, but since the whole thing is subtitled anyway, it doesn't make much of a difference for non-Spanish speakers. The original Spanish credit sequence and clothed scenes and additional footage for the Spanish release are included, all in 16:9 enhanced format. What's billed as the original U.S. Trailer looks like an international trailer instead; the film seems to never have had an offical theatrical release in the U.S.

Paul Naschy's films probably won't appeal to mainstream horror fans; despite all the nudity and gore his audience seems primarily to be Baby Boomer horror film fans open-minded enough to forgive his films' frequent incoherence and low budgets because of their lively set pieces, horror sequences Naschy and his crew deliver with obvious relish and enthusiasm. Horror Rises from the Tomb is far from Naschy's best but memorable in its own way, and thanks to the excellent transfer and extras, it comes Recommended.