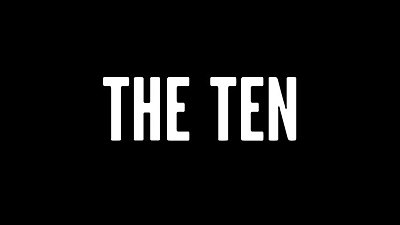 
The Movie
It's rare that I'll review a film cold, without any previous knowledge of what I'm about to experience. Whether it's an official site or a theatrical review, I'm always curious for some insight into an upcoming film. So when I saw the DVD release of The Ten coming down the river, I sought out the DVDTalk review by Jamie S. Rich, a reviewer I trust and admire.

From reading the review, It was obvious that his family had been wronged by a member of The State at some point, as there was no other reason for his overtly negative coverage, considering the group of talented filmmakers and actors involved. Certainly he let some past misdeed color his view of the film, since there's no way the group behind Wet Hot American Summer could be responsible for the humorless abortion Mr. Rich described in his hateful screed. I immediately cancelled my subscription to his biweekly newsletter and resigned my post as the acting secretary of the local 1444 chapter of the JSR-Keteers, effective two weeks from my notice.

Now that I have watched the film, I humbly ask that Mr. Rich forgive me my trespasses and let me back into his good graces, for once I was blinded by the brilliance of The State and now I see: The Ten is a shocking dud of a movie. 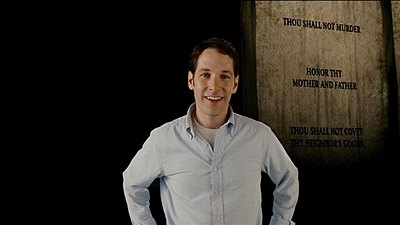 The format is a good one, and one that has worked in other films (like Meaning of Life), as several short scenes with a similar theme are joined by a framing device and shared characters. Here, Paul Rudd, as Jeff Reigert, acts as host for 10 stories representing the 10 pillars of The 10 Commandments, while trying to deal with his wife (Famke Janssen) and girlfriend (Jessica Alba.) Well, at least nine of them, as the bit about graven images, as easy a target as you can ask for, has been jettisoned in favor of "Thou Shalt Not Covet Thy Neighbor's Goods." If it resulted in the film's best segment, it might have been forgivable, but sadly, it didn't.

Then again, it would be hard to notice it didn't work, since the majority of the film doesn't work, starting with the first segment, with Adam Brody and Winona Ryder, and including Rudd's increasingly pointless interstitials. Brody's moronic skydiver jumps out of a plane without a parachute, and ends up stuck in the ground, which results in him becoming a worshipped media sensation, thus breaking the whole "one God" rule. Unfortunately, his crash is badly handled and hardly enough of a payoff for the build-up it follows. It's just the first of such ill-constructed scenes, as the majority of the film swings and misses at big laughs, like Ken Marino becoming a prison bitch after killing a woman on a goof, or A.D. Miles leading a new nudist movement to make the Lord's day less than holy. Worse yet, the ending is practically insulting, with a musical number that will make you say, "That's it?"

That said, the film does hit the mark at times, like the take on honoring thy mother and father, in which Kerri Kenney-Silver plays mom to twins who learn who their real father is, but when they get to meet him, it doesn't go quite as planned. Similarly, Gretchen Mol succeeds as a virginal librarian who finds her passion on a Mexican vacation in Jesus (Justin Theroux), who's not the sacrificial savior you remember. But these are few and far between, outnumbered by scenes like the excellently-animated story of the Lying Rhino, which doesn't work, despite the presence of H. Jon Benjamin.

That waste of talent is repeated again and again in this movie, as the cast of The State is joined by an incredible group of name actors, including Oliver Platt, Winona Ryder, Liev Schreiber and Rob Corddry, along with some cameos by well-known faces like Janeane Garofalo and Rashida Jones (with Schreiber doing the best job with the material.) Maybe if the film sported unknown actors, instead of a beloved comedy troupe supported by a gaggle of impressive stars, the expectations for this movie would be much lower and it wouldn't feel like such a disappointment. It still would be pretty lacking in laughs though, leaving it low on your must-see list. 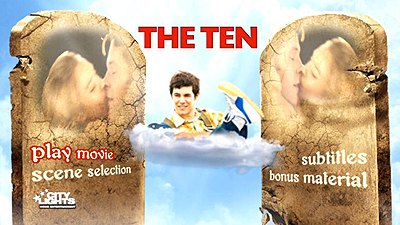 The DVD
A one-disc release, this DVD is packed in a clear single-width keepcase, with a two-sided cover that sports a list of chapter stops on the inside. The disc has an animated anamorphic widescreen menu with options to watch the film, select scenes, adjust languages and check out the special features. There are no audio options, though subtitles are available in Spanish, along with closed captioning.

The Quality
The anamorphic widescreen transfer for the film is well-done but won't blow anyone away, bringing appropriate color, a good level of detail and a clear, crisp image to the table. There's no noticeable dirt or damage and no obvious digital artifacts messing things up.

Oddly, the box has a DTS logo on it, but the only audio track (besides the commentary) is a Dolby Digital 5.1 English track, and it's a solid one, utilizing the surround speakers during the musical numbers, while keeping the dialogue clean through out the rest of the movie, which is mainly all about speaking. You won't notice anything dynamic about the mix, with most of the audio coming from the front of the room in very clean, yet standard quality.

The Extras
The bonus material starts with a feature-length audio commentary with Wain, Marino, Rudd, a jazz bassist and Wain's parents, who call in from Cleveland. Though Rudd's shared less time with the group than Marino and Wain, he fits right in, joking about the film and talking about his first experience as a producer, as the bassist gives them a beat to talk to at times, and the Wains provide brutally honest opinions of their son's film. It all adds up to an entertaining and informative track.

A robust collection of deleted and extended scenes and outtakes checks in at about 55 minutes, though it could have been better organized, rather than going scene for scene with the movie. Thus, if you want to watch just bloopers or deleted scenes, you're out of luck. Fortunately, much of the extra footage isn't half-bad, as improvisation is the order of the day.

A more traditional look behind the scenes is provided in the five-minute "The Making of The Ten" featurette, while more insight into the film is found in an IFC interview from SXSW, with Marino, Wain and Rudd. The guys basically joke around the entire time, which makes for a fun seven and a half minutes.

The disc wraps with a bit of oddity, plus some trailers and a weblink for cellphone ringtones and wallpaper from the film. The oddity comes in the form of an episode of Wain's online series "Wainy Days." I couldn't care less about cellphone crap (not to mention the site didn't work as of this review,) but the short show isn't bad, though you can find it online without the DVD. 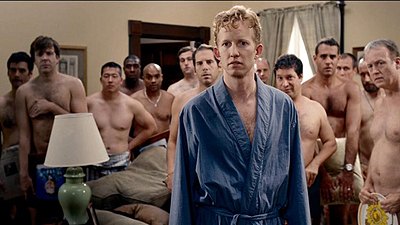 The Bottom Line
Never could I have imagined the people behind The State would one day deliver a film that didn't bring a healthy dose of laughs. But here it is, I'm sad to report. On the plus side, the disc looks and sounds quite nice, and there's a good amount of extras that have the sense of humor the film is missing, including the unusual audio commentary. Fans of The State should revisit the fantastic Wet Hot American Summer for a laugh fix, and leave this one for a late-night cable discovery.