Every once in a while a review disc crosses my desk that I really don't want to screen.  That was the case with Blade of the Phantom Master.  This one-shot theatrical movie is based on a 17-volume manga series that was recently completed, and it just didn't sound that enticing.  So I was quite surprised when I finally popped the disc in and discovered that the movie was actually pretty good.  This story of a man wandering a lawless country is more nuanced that I thought it would be and while the action was good the plot was engaging too.   This is one of those unexpected surprises that are always so fun to stumble across.

The Jushin Empire, a wide, sprawling group of countries, has a secret elite cadre of troops that act as both an army and as a police force.  These warriors are known as the Amen-Osa, the Phantom Masters, and they have fantastic powers. 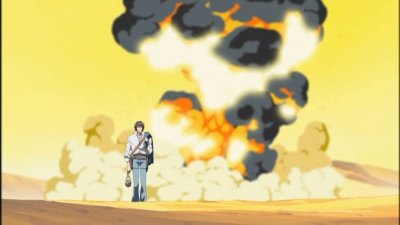 Jushin has fallen however, and the Amen-Osa are no more.  The former Empire is now broken into city states and small countries ruled by tyrants and plagued by thieves.  Through this world wanders Munsu, the last of the Amen-Osa.

This movie plays a lot like the first volume of a TV series, and given that it was adapted from the first chapters of a manga, that's not too surprising.  There are two stories in this film that serve to introduce the characters and explore Munsu's world and his background a bit.

In the first tale, Munsu is wandering through the desert without water and soon succumbs to the heat.  He is rescued by a young man, Monlyon, who gives him water and tells of his country that is ruled by a cruel and vicious dictator.  This dictator has taken the man's love by force, a beautiful lady named Chun-Hyang, and he's out to try to retrieve her.  Before the pair get very far however they are attacked by desert monsters and Monlyon is killed. 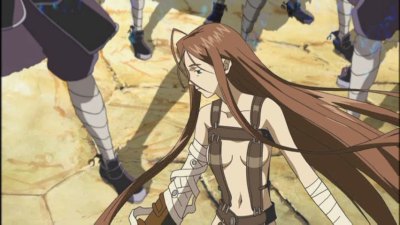 Munsu continues on his own to Monlyon's country and discovers that things are as bad as the young man said.  Feeling that he owes his dead friend a debt, he tries to take on the dictator and his army single handedly, something that he's more than capable of doing.  The tables turn however when Chun-Hyang appears.  She's had a monstrous claw grafter onto her left arm and been turned into a highly trained killing machine.   Even with all of his Amen-Osa powers, Munsu is no match for her.

The second part of the movie involves Munsu traveling to an island where something strange is going on.  Everything seems to be perfectly fine, with no poverty, ample food, and a content populace.  However there are no animals anywhere to be found and things seem a little too perfect.  As Munsu digs into the history of the island he discovers a horrible truth that they are hiding. 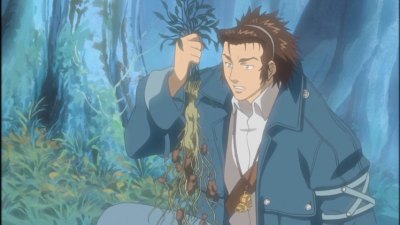 One of the things about this movie that's so captivating is Munsu's character.  He's not like the Lone Ranger, helping the downtrodden wherever he finds them.  He doesn't really care about other people's problems.  When he confronts the king of Monlyon's village the peasants rally around him and he tells them to get lost or he'll kill them himself.  He's disgusted that they weren't brave enough to challenge the king by themselves.  He also doesn't want to get involved with the island at first, it's only when he discovers something that may lead him to the man he's hunting that he becomes involved.  It's a nice change of pace from the usual hero.  Having a main character that is flawed gives the film an extra dimension that a lot of anime doesn't have.
Another nice touch is that an Amen-Osa isn't all powerful.  Munsu carries guns, and even when he's using his powers he can't best everyone.  They show several times that he's only good in fights against large numbers of minimally trained fighters.  Munsu loses fights to strong combatants several times.

While the stories are interesting and the characters are more developed than your typical anime, the movie still has a few weaknesses.  There are some plot points that aren't developed fully (why did Chun-Hyang fight for the evil king when she hated him so much?) and the section linking the two stories drags a bit.  While the movie does not end in a cliff hanger, there isn't any sense of closure either.  It feels like just the first part in a larger work, which, unfortunately, hasn't been extended.

This disc comes with the original Japanese audio as well as an English dub, both in Dolby Digital 5.1.  There wasn't a lot of use made of the soundstage except during the action scenes, which were vibrant and engulfing.  Once the battle was over however the audio basically collapsed to a stereo mix, which was a little disappointing.  The English dub, which I spot checked, was good with the actors doing a good job with their characters and avoiding stupid accents.

The 1.78:1 anamorphic widescreen image looked very good.  The colors were very bright and solid and the lines were tight.  There was a little aliasing in some scenes, with a few fine diagonal lines having a stairstep effect rather than being straight.  This was minor whoever and the disc looks very good overall.

There're a good number of bonus items included with this disc.  Making of the CG is a ten minute piece that shows how the CGI images were rendered.  This was pretty standard and reminded me of countless other featurettes on computer animation.  That is followed by a minute and a half storyboard to CG piece which shows the animated storyboards and then the finished CG.  This is silent.  Adding the soundtrack would have made it a bit more enjoyable.

There's also a six-minute reel of production sketches, and interviews with the Japanese actors who voice the three main characters.  These interviews show them both in the studio recording their lines and outside of it talking about the character.  The extras section is filled out with a couple of theatrical trailers, TV Spots and promos for other ADV releases.

The most disappointing aspect of this movie is that there isn't more.  This plays like the first chapter in a much larger work, but since this film was made in 2004 and no sequels have been released, it appears that this is all that's going to be made.  Munsu's world is rich and interesting, and it's too bad that there won't be more chapters in his story.  Here's hoping that someone releases the manga in the US.  Recommended.