The last installment in German distrib New Entertainment World's batch of Romy Schneider films is Roberto Enrico's difficult to track down Le Vieux Fusil a.k.a The Old Gun (1975). Still unaccounted for in North America pic is likely to enchant those completists whose passion for Mrs. Schneider's work will forgive a few minor flaws with the presentation.

Dr. Julien Dandieu (Philippe Noiret) lives a quiet life with his wife Clara (Romy Schneider) in the heart of the French countryside. With news about the German army approaching the area the doctor asks his family to move into an old castle away from the village. A week later he is to join them. When Julien finally arrives at the castle he discovers two bodies and a contingent of German soldiers preparing to leave the area.

If cruelty and basic instincts are the key ingredients for a good revenge story then by all means Le Vieux Fusil is an excellent one. Stripped of glamor, focused on detail, and notably disturbing pic recreates a fraction of WW2 while investigating the physical and spiritual deterioration of a man with nothing to lose but his life.

Le Vieux Fusil maintains a balanced pacing which allows the director to comfortably introduce the audience to the world of Dr. Dandieu. Which happens to be impressively bipolar: the introductory twenty or so minutes are full of quiet moments revealing a stable and trustworthy relationship between the doctor and his wife while the second half is in total contrast with the serenity the couple is initially seen sharing.

The emotional shift pic introduces is abrupt. The violence that ensues is disturbing and occasionally, in my opinion intentionally, rivaling kitsch. The scenes where the doctor eliminates the German soldiers with impressive precision eventually become entertaining rather than remain repulsive. As if to enhance the ridiculous nature of violence Dr. Dandieu's actions become less and less justifiable. 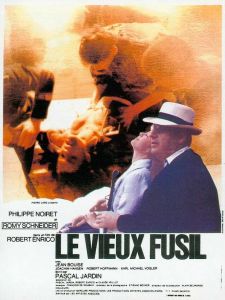 Winner of Cesar awards for Best Actor (Philippe Noiret), Best Music Score (Francois de Roubaix) and Best Film in 1976 Le Vieux Fusil has lost a tiny bit of its authenticity. There are moments when pic feels slightly dated, perhaps even a bit pompous. The hidden political statements are overenhanced caricaturing one of the sides while effectively glorifying the other. Yet, the performances are solid, allowing the story to maintain a level of authenticity which transforms this film into a pleasant surprise.

Presented in an aspect ratio of 1.78:1 and enhanced for widescreen TVs the print used for this release appears to be from the same quality witnessed in New Entertainment World's previous discs: it is sourced from a relatively clean analog master. The overall quality is acceptable - colors are good, contrast acceptable, and print damage practically non-existent. It is obvious however that digital restoration has not been performed. Occasional tiny scratches and debris are noticeable even though they do not affect the viewing experience. The solid clarity however typically associated with newly-restored prints is lacking proving that a better print of this film is sooner or later going to appear (A French non-subbed print is in circulation but not as impressive as it should be). PAL-encoded, Region 2.

There are three audio options here: DD German, English, and French tracks. Both the English and French tracks have been offered as original (the actors' lines are in different languages). I opted for the English one as it is the only that grants English subtitles for portions of the French spoken lines. This being said however there are tiny "memory flashbacks" where German is spoken and English subtitles aren't provided. These are typically very shot sequences which I did not find distracting. The overall audio quality is acceptable and I did not detect any disturbing dropouts/hissing. Optional English, French, and German subtitles are provided.

Aside from a photo gallery, a short alternate scene in German with English subs, and a soundtrack boasting seven bits from the film there is nothing else to be found here.

I am going to recommend Le Vieux Fusil based entirely on the fact that this is the only English-friendly version of this film that I could currently find on the international market. Obviously there are a few minor flaws with the presentation but the film is strong enough to negate them should you have any interest owning it. Obviously a fully restored version of this film will be a treat but until it becomes a reality I shall simply recommend that you seek the German disc.