Winner of the Special Jury Prize at the Sundance Film Festival in 2005 Argentinean director Jorge Gaggero's Live-in Maid is as much of a film about an uneasy relationship as it is a sobering look at a country with a devastated economy.

After spending thirty years of her life working as live-in maid for cranky alcoholic Beba (Norma Aleandro) disillusioned and fatigued Dora (Norma Argentina) is finally moving away. On the outskirts of Buenos Aires she has a tiny house, an overworked boyfriend, and plenty of bills awaiting her return. On her last day of service Dora is brought to tears.

There are precisely two reasons why Live-in Maid works so impressively well.

First - the emotional collapse of the two thesps, caused by their inability to financially support themselves, is so impressively observed that by the time they part ways (halfway through the film) the audience already feels that a precious relationship is broken. A heavy sense of nostalgia quickly sets in.

Second - the unceremonious, at times cruel, vision of a country heading into the abyss of economic depression. Argentina's recent troubles to maintain fiscal stability are seen in practically every frame captured by Gaggero's camera. The abandoned rusty cars, the dirty backstreets of the city, the overflowing with goods pawn shops filled with the possessions of those who have been forced to sell in order to survive. Desperation is everywhere.

The dialog is hardly as important. As the story progresses it becomes obvious that a happy-ending isn't on the horizon. The nagging feeling of a catastrophe waiting to happen is so heavy that it eventually erases even the few brighter spots pic introduces during the first half. As expected, the two thesps find themselves on the same end of the drama: losing everything there is to lose. 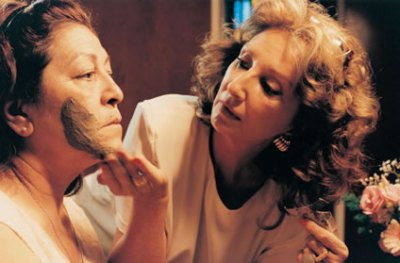 While not as cynical and gut-wrenching as Alejandro Chomski's Hoy Y Manana a.k.a Today and Tomorrow (2003) Live-in Maid is just as alarming. The prominent social overtones detected in recent Argentinean cinema prove that film directors are concerned about the fate of their country. Their fresh and stripped of unnecessary politicizing storytelling is far more impressive than a picture with empty political slogans seeking for a scapegoat would have been. Not surprisingly in Live-in Maid it is ordinary people with ordinary lives that are seen struggling, slowly but surely giving up even their most precious hopes.

The transfer for Live-in Maid is somewhat of a disappointment. Presented in its original aspect ratio of 1.85:1 but not enhanced for widescreen TVs the print provided by Koch Lorber Films reveals a weak color scheme, questionable contrast, and a notable amount of edge-enhancement. Detail is quite disappointing as well due to a number of conversion issues - clearly the master used for this disc was not in a healthy condition. Aliasing is also prevalent. To sum it all up there are too many rough spots here that I can only partially rationalize (I am aware that even the R4 English-subtitled disc isn't enhanced for widescreen TVs).

Provided with a Spanish DD track and optional English subtitles the audio treatment is passable. The dialog is easy to follow and fortunately enough I could not detect any significant dropouts or hissing. Note: those of you with scaling/zooming players shall be able to adjust the image for the lack of anamorphic enhancement with the subs comfortably placed in the very bottom of the image.

Aside from the theatrical trailer the DVD offers a Making Of where the cast and crew comment on the events that appear to have inspired the film. The economic meltdown from 2001 is passionately addressed by the actors while certain technical aspects from the film are commented on as well.

Carefully observed and alarming Live-In Maid is an excellent opportunity to see how far Argentinean cinema has come. The two leads are flawless, utterly convincing as the characters they play. Unfortunately, the R1 presentation of this excellent film isn't. The DVD by Koch Lorber Films is somewhat of an unexpected disappointment given the distrib's solid line of recent discs. Rent it.