Devil Came On Horseback, The

A disturbing look at the ongoing crisis in Darfur, Sudan "The Devil Came on Horseback" follows the journey of an ex-Marine Captain whose mission to bring out the truth comes to a screeching halt. Pic offers unedited and highly graphic visuals some may not be able to cope with.

Brian Steidle found his job on the internet - a military observer for the African Union in the highly volatile Darfur region. He packed his belongings, took a portable camera, and headed to Sudan. In the days to follow he would witness a human genocide of unimaginable proportions where more than 400 000 people were literally exterminated.

The Devil Came on Horseback asks questions where the more one struggles to find answers the more one is likely to fail. Miserably. What you see on the screen is unthinkable, unexplainable, unimaginable. Yet, it is real.

After 20 years of civil war Sudan agrees on a cease-fire. International observes are invited to the region in an attempt to legitimize the government's progress. While the visitors are fed with manipulated data the newly established pro-Arab Sudanese government trains and arms powerful militia units known as the Jinjaweed (devil on a horseback) whose mission is to cleanse the predominantly African populated Darfur. What ensues is a human genocide or paramount proportions.

Steidle shoots with his camera, writes, and documents the horrific events. He sends his reports to the powers to be, no one reads them, and the killings continue. He gives up.

Back in the US Steidle is approached by The New York Times and shortly after his uncensored photos are published. The world is in a shock. After the tragedy in Rwanda no one can comprehend why the most powerful nations in the world have remained observers. After days, weeks, and months of reports the US government finally declares that the events in Darfur can be described as genocide (a green light for the United Nations to step up).

The Sudanese government fires back accusing Steidle of fabricating data, exaggerating facts. He travels back and forth between neighboring Chad searching for more answers. But things get even more complicated. While the Jinjaweed keep exterminating the African majority (!) oil peacefully flows through Sudan. Guarded by the Chinese military(!). More data is gathered, more resolutions are drafted, even less is done to put an end on the killings in Darfur. 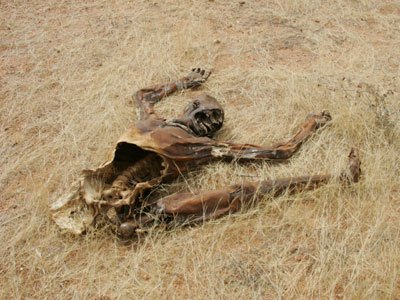 Pic runs the gamut from anger to shock in an unprecedented manner. The horrific visuals enhanced by the gut-wrenching recollections of survivors who have miraculously escaped the Jinjaweed are like nothing I have seen in recent cinema. Steidle's camera moves slowly but convincingly, hardly shying away from the hacked bodies scattered in the dust. Nothing is spared, nothing is edited, nothing is unfilmed.

Presented in an aspect ratio of 1.78:1 and enhanced for widescreen TVs the film looks as solid as one could expect a documentary should. Colors and contrast vary due to the different stock used for this production yet the overall image quality is solid: the archive footage is free of damage while the rest of the film is in top notch condition. Grain appears to be prevalent throughout with some of the daylight scenes being noticeably sharper in terms of color. Overall, I am fairly impressed with this presentation given the mixed nature of the material being used.

Somewhat surprisingly the DVD offers 2.0 and 5.1 tracks of English/Arabic dialog which appears exceptionally well-handled. Once again the quality varies according to the footage being used but the clarity and crispness of the commentaries are notable. I did not detect any issues to report here. The fractions where some of the locals speak in their native tongue (or in broken English) are subtitled.

Aside from the original theatrical trailer you will find an extra bit titled Supporting Survivors where the camera takes us to a refugee camp in Chad. Survivors share their life stories, what they have endured, the tiny hope they have for the future. The extra is an excellent opportunity to further examine the blood-curling nature of the events described in this documentary.

The best film I saw in 2007 The Devil Came on Horseback will tear your soul apart. No one, no matter how good of a writer, could come even close to describing in simple words the horror from Darfur. This is an ungodly drama which the world has shamefully tolerated with its passive behavior. I am going to give this film DVDTALK's highest endorsement hoping that as many people as possible see it. Including those capable of making important decisions.