Other // Unrated // November 13, 2007 // Region 2 // PAL
List Price: $25.95 [Buy now and save at Xploitedcinema]
Review by Svet Atanasov | posted January 12, 2008 | E-mail the Author
The Film:
Rising Spanish stars Paz Vega and Leonor Watling team up in Ray Loriga's recent take on the life of St. Theresa of Avila. Already a subject of enormous controversy in its native Spain pic provides a multitude of angles placing its subject into a distinctively modern context.

Set in early 16th century Teresa, el Cuerpo de Cristo a.k.a Theresa: The Body of Christ (2007) aims to recreate a pivotal time in Spanish history when different reformation movements are gaining strength. Young Theresa (Vega) challenges the established by the Catholic Church order by announcing her spiritual and carnal devotion to God. Experienced through a series of trance-like acts Theresa's union with God is quickly denounced by leading Catholic officials and she is faced with a trial. Lady Doña Guiomar (Watling) offers her support and Theresa proceeds to found a Carmelite monastery.

A period piece whose focus on the life of St. Teresa of Avila is introduced via an unconventional script Teresa, el Cuerpo de Cristo relies on a cast dedicated to perfection. Dialog and acting are convincing and not overdone given the subtle nature of the events pic addresses.

The intimate spirit pic maintains occupies a prominent role with the exception of a few selected scenes where turmoil, political and religious, is emphasized. A massive epic feel isn't intended even though the opening scenes where the Spanish Inquisition is acknowledged are striking.

The intent here, as suggested earlier, is to minimize any excessive distractions while Theresa's unorthodox embrace of God is deconstructed. The controversial element appears to be the prolonged scenes of carnal rapture which Vega enhances tremendously well. Doña Guiomar on the other hand occasionally feels slightly less influential, than acknowledged to be, and this could be a reason for concern amongst those praising pic's credibility.

In the grand scheme of things however Theresa does prove to be a mystery as far as her transition to embracing God is concerned. Carnal devotion and the notion of religious ecstasy pic dwells on go a long way in "logically" explaining Theresa's behavior even though they do seem inconsistent with her profound desire to reform religious ordinance. Nevertheless, pic is a well measured attempt at analyzing the life of a saint promoting a modern but satisfying read on controversial events which both cast and crew handle notably well. 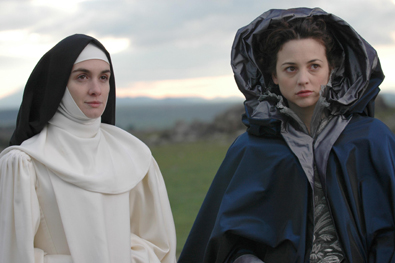 Presented in its original aspect ratio of 1.85:1 and enhanced for widescreen TVs the print for this DVD release looks lovely. Excellent color reproduction, impressive contrast, and impeccably clean transfer is what we have here. The progressive treatment is also very impressive allowing the image to remain strong when blown out through a digital projector. Edge-enhancement isn't an issue and aside from a tiny bit of aliasing which I noticed in the first half the rest of the print appears to be in top-notch condition. PAL-encoded, Region-2.

Presented with Spanish (Castellan) 5.1 track and optional English subtitles the audio treatment is just as impressive. Crystal clear and very easy to follow dialog is what this disc offers. The sporadic bits of music are well mixed blending well with the film's subject. Finally, I could not detect any disturbing hissing(s) or dropout(s).

There are some interesting extras on this disc but unfortunately they all appear to be in Spanish-only. Therefore, I am just going to list them for you: TV clips, Trailer, Cast and Crew Discographies, Synopsis, Making-Of, Behind the Scenes (with commentaries from the cast and crew), and Interviews.

Controversial but convincing take on the events surrounding St. Theresa of Avila's reformation plight this is a film that should appeal to those who like slow but intelligently conceived period pieces. Paz Vega is truly exceptional as is the supporting cast (Leonor Watling/ Geraldine Chaplin). The DVD treatment is of exceptionally high-quality.