Sicily is under the rule of the Bourbons. The picciotti have squashed a massive riot in Palermo where local patriots are calling for armed resistance. Further South gangs are scattered in the mountains awaiting the arrival of Giuseppe Garibaldi.

Carmeniddu (Giuseppe Gulino) has joined the rebels but his mind is restless - his beloved wife Gesuzza (Aida Bellia) is alone in the village. With news about a large contingent of picciotti approaching his home Carmeniddu is determined to take matters in his own hands. But during war one has to follow orders, not his heart.

Groundbreaking early Italian cinema which has rarely been available in such pristine condition on this side of the Atlantic 1860 is structured to work both as a gigantic epic as well as an intimate tale about two people madly in love with each other. With notable emphasis on detail pic gets the spirit of the time right.

The massive battle scene at the end is comparable in scope to the epic action seen in Bondarchuk's War and Peace. Blasetti's camera roams freely capturing as much as possible from the massive movement of people, the exchange of fire. For a substantial period of time much of the battle feels like a documentary piece.

Editing, especially for such an early film, is top-notch. The switch between the more intimate side of the story where Carmeniddu and Gesuzza are the focus of attention and the distinctively patriotic message is convincing. As a result pic does not come across as a declamation rather it plays as a history piece with strong and believable thesps.

The overwhelming sense of nationalism oozing from the screen is to be expected given that 1860 was commissioned and completed during Mussolini's era. As mentioned earlier however empty slogans or incoherent lines are not part of the story. 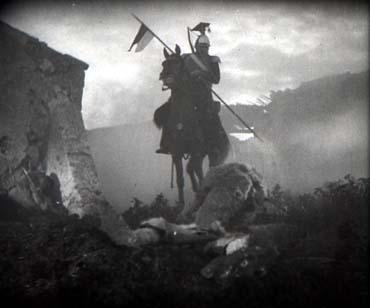 1860 culminates with a prolonged battle scene which never grants Garibaldi a major role. He is seen sporadically and merely in the context of the historic events pic attempts to recreate. Blasetti's approach is commendable given that a shift towards a superior and more complex character at the end of the story would have dramatically affected its cohesiveness.

Pic is based on Gino Mazzucchi's story La Processione Incontro a Garibaldi.

Presented in its original aspect ratio of 1.37:1 1860 is offered an impressive treatment by RHV. Disc 1 boasts the newly restored 1933 version of the film with the original Italian ending added as a bonus (it could be selected separately). The restoration by the Italian team, yet again, is impeccable. Contrast is absolutely phenomenal, detail is top-notch, and the black and white gradation truly impresses. The actual print is clean of debris, dirty spots, or disturbing specks. To be honest this presentation surpasses the best I have seen done with cinema this old. Simply fantastic! PAL-encoded, region 0.

Presented with its original Italian mono track and optional Italian and English subtitles the audio treatment is every bit as impressive as the video is. Restored, crystal clear, and extremely easy to follow the mono track is flawless. I could not detect any hissing(s), or drop-out(s) to report here.

Blasetti's film arrives as a splendid double DVD set. In it you will find a thick 32-page booklet in Italian only with plenty of supporting materials pertaining to the film's history and production. On disc 1 aside from the restored 1933 version of the film you will also find the original Italian ending as well as Mario Caserini's silent Anita Garibaldi (1910) with Italian inertitles. The piece is quite enjoyable and also in very good condition.

On disc 2 RHV have provided 1860: I MILLE DI GARIBALDI the restored 1951 version which is in Italian with optional English and Italian subtitles. There are some notable differences between the 1933 version and the 1951 version of the film not only in the use of a narrator for the latter but also in the addition of completely different footage. The 1933 version also has an intermission. I also saw different editing on a number of occasions especially during some of the key battle fragments. In addition RHV have also supplied the original 1933 version of the film taken from an archival 16mm print of the film with an Italian audio only. Finally, there is the original theatrical trailer for the film.

A spectacular set! Alessandro Blasetti's 1860 has received the royal treatment it rightfully deserves. RHV have upped the bar yet again and I could not think of a single reason why this 2DVD SE should not be awarded our highest mark: DVDTALK Collector series.