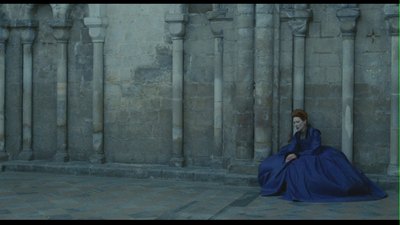 Movie sequels are tricky things. How far can you take a concept without fans complaining they didn't get enough of what made them like the first one, and how much do you pander to audience expectations without suffering accusations of repeating yourself? When I first reviewed Elizabeth: The Golden Age, I declared it a success, only to watch as most other critics took to bludgeoning the beleaguered Queen, sending her and her movie franchise kingdom tumbling right off the box office map. (You can read my first review here; worth clicking through if for no other reason but to see the beautiful illustration Joëlle Jones did exclusively for the piece.) What's a monarch to do when her approval ratings sink even when she knows she's right? Wait for DVD and hope history vindicates her?

In the follow-up to their 1998 film, director Shekhar Kapur and actress Cate Blanchett return to the royal court that so turned everyone's heads and made Blanchett a star. (Have we really only had ten years with Cate? It seems so much longer, I can't remember a time when she wasn't gracing us with her presence.) The original Elizabeth showed a young woman's rise to power, contending with political intrigue and the shifting religious faith instigated by her morally questionable father, Henry VIII. Known for having nearly as many wives as there are numbers following his name, ol' Hank left a knotty lineage behind him, leaving some question as to who his true heir should be. Even in The Golden Age when Elizabeth has had some time to get used to the position, there are still forces who believe she has wrongfully taken the crown. An aspirant to the throne, Mary Queen of Scots (Samantha Morton), remains in a minimum-security prison, insisting that the kingdom is rightfully hers.

For the second movie, Kapur has chosen to look at how Elizabeth's lowest ebb rose to become her greatest triumph. At the start of the film, we find the Virgin Queen in a state of political and personal distress. The country's coffers are nearing empty, while King Philip II of Spain (Jordi Molla) keeps flexing his muscles and gnashing his teeth over England's renunciation of Catholicism. This leads to even larger questions of what to do with those who refuse to convert, and underground conspiracies flare up connecting Mary Stuart, Spain, and extreme Papists, lead by the sinister Jesuit (Rhys Ifans). Meanwhile, the Queen's non-existent personal life causes her much personal grief and makes her the source of gossip. Her independent nature has become a double-edged sword. Her trusted advisor, Sir Francis Walsingham (Geoffrey Rush), would like to see her married so as not only to provide England with an heir to the throne, but also, if they choose the right husband, to shore up alliances and put an end to many of these problems.

So, right there, the basic premise of the movie continues with the sub rosa machinations and the celebration of the Queen's independent spirit that was so essential to the success of Elizabeth. Here the fans are covered, and Elizabeth: The Golden Age can get on with establishing its own identity.

In the midst of all this talk of suitors and deceit steps Sir Walter Raleigh (Clive Owen). Fresh from establishing the Virginia colony for his Queen (the moniker coming from her "Virgin" nickname), Raleigh represents the free spirit that Elizabeth has fancied herself being. She finds his tales of traveling the world fascinating and wishes she could join him on his explorations, but her duty is to England--something she realizes more and more as she opens herself up to the dashing swashbuckler. Here is a woman that has given everything she is to her country, and the only thing she has managed to keep for herself is her love and her womanhood. Thus, when she finds a man like Raleigh who can be honest with her, it's no wonder she falls for him. Here Cate Blanchett brings a tremendous vulnerability to her character. In all other things she can rebel against convention, so no one can really believe she doesn't take Raleigh to the altar out of deference to social mores; rather, true emotion is the one thing that scares her.

It also becomes the one place she fails, blind as she is to the affection that grows between Raleigh and her most trusted lady in waiting, Beth (Abbie Cornish), whom Elizabeth lives vicariously through. It's a semi-betrayal that she is ill equipped to deal with, and her emotional state is visited upon England in almost metaphysical terms. Kapur and his writers, William Nicholson and Michael Hirst, make several references to storms and dangerous winds, and even set up Elizabeth as a kind of force of nature (when she has an altercation with the Spanish ambassador, she refers to herself as a hurricane). Everything spirals down the same drain, threatening to take the Queen and her country with it. 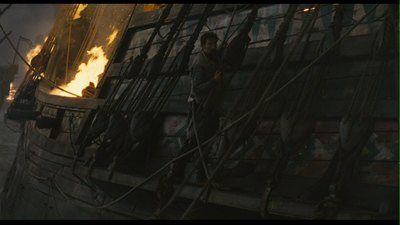 How Elizabeth pulls herself out of this nosedive is really how The Golden Age sets itself apart. If the first film was the story of how she achieved the power, then the second film is about how she embraced it, moved from being a leader in title to being a true leader by action. As Spain attacks, Elizabeth becomes the warrior queen, donning silver armor and giving a rousing speech reminiscent of the more aggressive readings of the Battle of Agincourt speech in Henry V. This leads to a tremendous sea battle with Clive Owen driving burning ships into the Spanish Navy. Kapur uses visual effects that make the nautical war look like paintings come to life. It's astonishing to look at, and Owen is breathtaking as the hero, riding the side of a flaming boat and diving into the water, victory trailing in his wake.

From what I've read, this is where Elizabeth: The Golden Age lost a lot of people. I don't quite get it, because thematically it makes perfect sense, and from a filmmaking standpoint, Shekhar Kapur gets it exactly right. It's exciting, stirring, and ultimately triumphant. As a character arc for Elizabeth, we see her grow, learn, and even change. Considering, too, that at one point Kapur touted Elizabeth as being the first in a trilogy, then The Golden Age makes perfect sense as a middle chapter: darker, deeper, and advancing the story toward what should be its greatest triumph.

So, for my money, Elizabeth: The Golden Age does what it's supposed to: it gives us more of what we want, while also giving us something special we hadn't seen before. But don't listen to me. Don't listen to any of us. Pick up the DVD and decide for yourself. 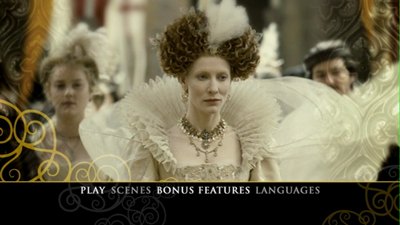 Video:
Elizabeth: The Golden Age and its predecessor are as praised for their lush visual style as the fine writing and acting, so anything less than awesome would not be acceptable as far as image quality on the DVD is concerned. Having seen this film in both a theatrical setting and now at home, I feel I can safely say that the movie has been transferred to disc with great care. The colors and the detail are as vibrant and clear as they should be. The film is a gorgeous thing to look at in its 1.85:1 anamorphic presentation.

Sound:
The studio doesn't skimp on the soundtrack, either. Three language options are available in 5.1: English, French, and Spanish. I watched the English and found the sound mix to be expansive and well tuned to bring out the right details while keeping the different aspects of the audio from stepping on each other's toes.

All three languages also have subtitle tracks, with the English version being geared toward the deaf and hearing impaired. 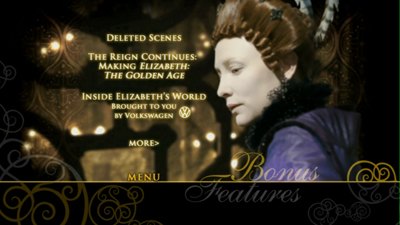 If you are browsing the store and pick up the DVD box, it doesn't advertise the full-extent of supplemental materials, so be aware that there is much more than the package lets on. For instance, not listed is the full-length commentary by director Shekhar Kapur. It's a very detailed monologue, vacillating between specific production information and historical background, including how he approached different aspects of the story and how some of the facts were bent to achieve a greater dramatic effect.

Also not listed are the Deleted Scenes. There are eight in total, running just over 9 minutes. They are mainly short trims, with the bulk of them filling out the Mary Stuart subplot and showing Walsingham doing more behind-the-scenes work. The longest scene is an extended version of the horse ride taken by Elizabeth and Raleigh.

The Reign Continues: Making Elizabeth: The Golden Age (11 minutes, 22 seconds): Your standard promo program talking about the reasons behind returning to the well and the intentions for making the movie. Cast and crew are interviewed, and there are some insights, but it's mainly a puff piece.

Inside Elizabeth's World (7:24): A closer look at the production design of the movie, with raw footage of locations and on-set construction. Oddly, this DVD extra is sponsored by Volkswagen. Is corporate sponsorship for DVD bonuses the future?

Commanding the Winds: Creating the Armada (12:00): The work that went into creating replicas of the ships used in the climactic battle, which were done as one model at full-scale, serving as both Spanish and English ships simultaneously. Then once the sets and filming is done, they go through the process of how the boats were multiplied and put on the ocean.

Towers, Courts and Cathedrals (10:43): This covers the on-land location sets, how and why they were chosen to fit the thematic thrust of the picture, and what it was like to film in real places.

These are all solid extras, giving a full picture of the various aspects of production and the effort that went into The Golden Age. They don't reinvent the wheel, but they aren't asleep at it, either.

FINAL THOUGHTS:
Though not highly lauded or widely seen when it came out in 2007, Elizabeth: The Golden Age is a sequel that is every bit as a good as the original. It keeps the courtly intrigue of the first movie and manages to advance the themes of power and personal politics while adding more action to the mix. Returning stars Cate Blanchett and Geoffrey Rush are exceptional as always, and Clive Owen continues to give more support to his reputation as the action star to swoon over. A good transfer and solid extras, Elizabeth: The Golden Age on DVD comes Highly Recommended. 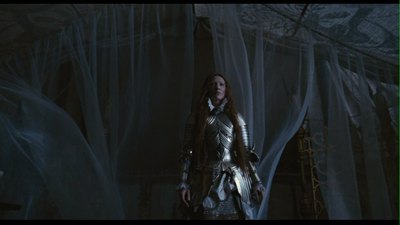