WGBH // Unrated // February 19, 2008
List Price: $24.95 [Buy now and save at Amazon]
Review by Stuart Galbraith IV | posted February 14, 2008 | E-mail the Author
A totally engrossing short documentary about the dawn of the Space Age, Sputnik Declassified is a 56-minute, 16:9 enhanced episode of PBS's Nova, first broadcast in 2007. Despite its title (and imaginative, Russian-flavored DVD cover art), the show doesn't actually focus on the Soviet space program. Rather, it reexamines the Eisenhower Administration's goals and policies toward space exploration and its defense applications, and the competition not only between the United States and the Soviet Union to be the first to get a satellite into orbit, but also between two separate and competing U.S. government agencies. 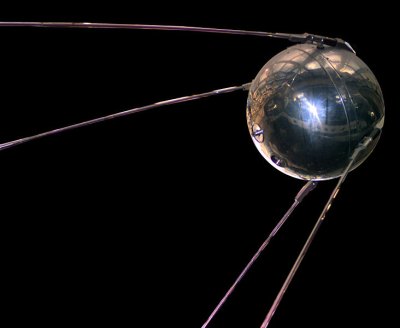 The documentary first is a reminder of the enormous uproar that followed Sputnik's launch on October 4, 1957. Many Americans (and some of her western allies) were in a state of near-panic, fearful that the Soviets - already transformed into slobbering, freedom-hating monsters after a decade of intense anticommunist propaganda - would use these "artificial moons" as platforms to launch a sneak attack with nuclear weapons.

As one of the interviewees says early on, Sputnik was "defined not as a Soviet success, but a U.S. failure," with President Dwight D. Eisenhower criticized at the time for being, proverbially, asleep at the switch. In press conference footage he appears blindsided by the news and dismissive of the enormous implications of what the Soviets had achieved. But, as the documentary points out, supported by recently declassified documents, Eisenhower was in fact armed with information about Sputnik that he withheld from the American people. In some ways he was actually delighted by the news of Sputnik's launch, for reasons this show makes clear.

In truth, Sputnik was little more than an aluminum globe with a radio transmitter stuffed inside it. It was totally harmless and didn't even take scientific readings. What it was designed to do was prove to the world that it existed, hence the radio signal it continually transmitted, a signal accessible to amateur radio operators around the world. Its batteries died after just 22 days and Sputnik burned up after falling from orbit a few months later.

Revelations that Eisenhower and his administration were far more involved in the development of satellites prior to Sputnik is both fascinating and disheartening. Though today Americans nostalgically look back on the Space Race as a friendly competition with only national pride at stake - to see which nation can be the first to launch an artificial satellite, to get a man into orbit, to send a man to the moon, etc. - in fact early on Eisenhower was interested in satellites not as stepping stones to manned space flights (which he had little use for) but rather solely for their military applications: to spy on the Soviet Union, and perhaps as space platforms from which to launch intercontinental ballistic missiles (ICBM) armed with nuclear warheads.

Eisenhower had two reasons not to fear Sputnik as many Americans did in 1957: first, he was armed with intelligence reports that knew it to be harmless. More importantly, its launch established an international legal precedent he had hoped to test with an American satellite launch, namely that the "space" above a country's atmosphere was not the exclusive domain of that country, but rather open to all. (Which, in turn, meant it was within the rights of the United States to send spy satellites into orbit over the Soviet Union.)

The race to get an American satellite into orbit therefore was, as far as Eisenhower was concerned, not for the general advancement of science and space exploration, but rather to establish a legal precedent that would allow the Cold War to extend into outer space. During the 1950s, before the creation of NASA, this task was charged to two competing groups of scientists: Wernher von Braun and his team of German and (mostly) Southern American scientists working out of U.S. Army facilities in Huntsville, Alabama; and the largely-civilian scientists of the Naval Research Laboratory and their Project Vanguard. The latter used rockets and technology far less reliable than von Braun's (eventually multistage) Redstone rockets; the documentary explores the politics that led to the disastrous decision to initially go with Project Vanguard.

Sputnik Declassified does an excellent job explaining the science of rockets and things like achieving orbital velocity (first theorized by Sir Isaac Newton) in plain terms that ordinary audiences can easily understand. While it paints a very personal portrait of von Braun and lauds his incredible ingenuity, it also doesn't shy away from his culpability when, working under the Nazis, he witnessed firsthand the use of concentration camp prisoners as slave labor in his V-2 rocket plants. (As the documentary grimly points out, more of these workers died in the Nazi factories than were killed by the V-2s.)

The show also strikes just the right balance of new interviews (including Germans from von Braun's team who worked with him as far back as the early-1930s), archival footage, computer animation of Sputnik's orbit, and so on. Only the in the reporting of the Soviet side of things does the show feel abbreviated.

Sputnik Declassified is presented in a 16:9 enhanced presentation that's generally quite good. The archival footage is highly variable; some of it is excellent, some of it looks awful. The Dolby Digital stereo is pretty good for a TV documentary, and the DVD is supported by closed captioning and, unusual for a DVD, described video for the visually impaired.

The only extra consists of "printable materials for educators" in Adobe Acrobat Reader format.

Sputnik Declassified does exactly what it sets out to do: it's educational in entertaining and intriguing ways, makes the scientifically and politically complex easy to understand, and leaves you wanting more. Highly Recommended.