ITV // PG // December 11, 2007 // Region 0
List Price: $38.95 [Buy now and save at Co]
Review by Stuart Galbraith IV | posted February 20, 2008 | E-mail the Author
Falling squarely into that category Irwin Allen used to describe his production of The Poseidon Adventure, Peter Hyams' Capricorn One (1978) is a "movie-movie," and just about a definitive example at that. Like Poseidon, Capricorn One finds its all-star cast (for the most part) logically working their way through an ingenious, outrageous premise. In Poseidon it was stranded passengers trying to escape a capsized ocean liner; in Capricorn One it's astronauts and a reporter trying to expose a faked NASA mission to Mars while escaping murderous conspirators. It's Hyams' best and most entertaining film, a personal favorite of many despite an inconsistent tone and a few plot holes. Though currently unavailable in the U.S., the British Blu-ray disc from ITV DVD is not region-encoded and sells for about $38.95 retail. 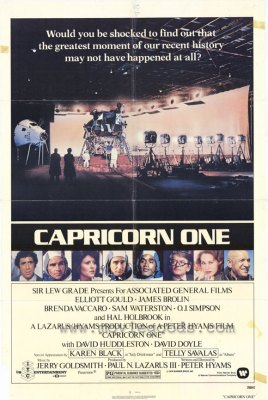 Though the film doesn't really hold up to multiple viewings, for first-time viewers unfamiliar with the story, Capricorn One is clever and full of surprises. The set-up goes like this: On the launching pad moments before lift-off, astronauts Charles "Bru" Brubaker (James Brolin), Pete Willis (Sam Waterston), and John Walker (O.J. Simpson - yes indeedy) are pulled from their capsule and secretly whisked 300 miles due west of Houston while the first manned mission to Mars is launched into space - with no men inside it.

In a rambling confession, Bru's longtime friend and colleague, NASA executive Dr. James Kelloway (Hal Holbrook) informs the trio that at the last minute it was discovered that the ship's life support system were faulty and would fail within three weeks. (Prescient of future NASA tragedies, a private contractor put profits ahead of safety.) With the future of NASA and billions in private contracts at stake, Kelloway and his conspirators take extreme measures: they plan to fake the entire mission on a movie-like soundstage (an impressive set). When Capricorn One returns to Earth, the three astronauts will be snuck back aboard their capsule immediately after splashdown. When Bru voices strong moral objections, Kelloway threatens to kill their families if they don't go along with the plan.

For the next several months, the scheme fools just about everyone, despite the wall-to-wall network news coverage. (Mild Spoilers) But when Capricorn One's heat shield detaches and the empty capsule burns up on reentry, the three astronauts realize they've become a major liability.

Meanwhile, gonzo TV reporter Robert Caulfield (Elliott Gould) stumbles upon clues about the cover-up after his NASA friend Elliot Whittier (Robert Walden), having figured out that the TV transmissions are arriving ahead of Capricorn's telemetry, suddenly disappears, wiped off the planet like he never existed.

Capricorn One's timing and ingenuity was faultless. Made in the wake of Watergate and renewed suspicions about the Kennedy assassinations, the idea of a conspiracy and stop-at-nothing government and big business types suddenly seemed more plausible than ever before. Bill Kaysing's book We Never Went to the Moon: America's Thirty Billion Dollar Swindle had been (self-)published a few years before, in 1974, though it was the movie's popularity that greatly accelerated these crackpot theories. (As reported in a 1999 Gallup poll, 6% of Americans continue to believe the Apollo missions were faked.) Around that time, a fickle American public had lost all interest in manned space flights; as Holbrook's character bitterly points out, Americans once glued to their TVs following every minute of Apollo 11 were by Apollo 17 complaining to the networks that their news coverage was preempting reruns of I Love Lucy.

All this made Capricorn One timely as hell, and while probably few involved with its production actually believed NASA would ever actually attempt such a grand deception, the conspirators in the film clearly are NASA personnel; none of this fictitious government agency business like you see in most movies and TV shows.

Produced by Paul Lazarus III (who also made the fine Westworld and its suspenseful, conspiracy-laden sequel, Futureworld) for a modest $5 million, Capricorn One is slickly-made and shrewdly cast. I hadn't seen the film in years, having steered clear of the letterboxed but not-16:9 enhanced DVD from 1998. My memories were that it was entertaining but preposterous with wildly inconsistent performances. On Blu-ray, minus the horrible panning-and-scanning of TV versions (it's very much a widescreen film with strong compositions) the film's performances are in unexpected ways helped somewhat in that our attention isn't drawn away to other characters in forced reaction shots.

For instance, I had remembered Gould giving his usual flip performance, a la The Long Goodbye and myriad other '70s films, but he keeps it in check more than I had remembered and lets his co-stars, particularly Brenda Vaccaro, exceptionally good as Brolin's wife, do their thing. David Doyle (Bosley on Charlie's Angels) is broadly comical as Gould's assignment editor, a throwback to The Front Page, but he gives the film a third act lift, as does Telly Savalas in an entertaining if hugely indulgent extended cameo as a greedy crop-duster. Some of the roles are well-conceived, but the ones that aren't, like Waterston's wiseguy astronaut, are carried by the actors' engaged performances.

The cast is peppered with lots of familiar faces. Karen Black, David Huddleston, Denise Nichols, James Sikking (with trademark pipe), Alan Fudge, James Karen, and Milton Selzer, Jon Ceder, and Barbara Bosson all have small roles. Nancy Malone, as Huddleston's wife, has something like two lines. As others have pointed out, the film amusingly stars both of Barbra Streisand's two husbands.

The film offers some strong visual storytelling, particularly in the way it turns two black helicopters into menacing characters, and one especially neat little moment where a hallucinating character sees them as menacing, opaque vultures.

Despite some shaky science (like a space capsule much too small for an extended mission to Mars) and plot holes (with the time delay to Mars, why let the reluctant astronauts talk to their families live instead of via a delayed signal?), Capricorn One is frequently clever, so much so that it's easy to overlook its shortcomings.

The inept packaging makes no less than three major errors. Though the case lists the "video aspect ratio" as 4:3, the movie in fact is presented in its original theatrical aspect ratio of 2.35:1. (It was filmed in Panavision.) The box also lists a running time of 118 minutes, but this too is incorrect. The film is complete and unedited, running 123 minutes. (There's no Warner Bros. logo at the head, which may account for the 124-minute running time listed in some sources.)

The 1080p image is a knock-out. Though some individual shots inherently are a little soft around the edges of the frame, most of the film is razor sharp and the color excellent. On big 16:9 TVs the barnstorming climax, a battle between the two helicopters and Telly Savalas' crop-duster, is visually exciting in a way it never was on TV and in standard-def video. This reviewer remembers how badly the film's red-on-black title design fared on TV and previous home video releases; like everything else, it looks sharp as a tack.

The packaging also lists an English mono soundtrack, but that's not right either. (It's almost like ITV wanted to discourage sales!) The soundtrack is fully directional surround, with Jerry Goldsmith's memorably pounding score really impressing here. Released theatrically before the widespread use of Dolby Stereo, Capricorn One originally had a limited number of 4-track magnetic stereo prints with some six-track mag 70mm engagements, though most prints were mono. The audio can't compare to today's standards and some of the dialogue is a little harsh and mildly distorted (due to on-set location audio, not in the audio transfer) but for 1978 it's got a lot of fun directionality and oomph at a time when more American and British movies were mono than they had been in the mid-1950s. An English hard-of-hearing subtitle option is included. Beyond that, the disc has no Extra Features

Capricorn One is something of a cult film, a popular guilty pleasure few will admit to liking. There's no reason to feel guilty about it, however. It's one of the best popcorn movies of the 1970s, and this region-free Blu-ray presentation offers the best home video release of the film to date by far. Highly Recommended.

My thanks to reader Kraig A. McGann, who kindly offered to let me take a gander at his Blu-ray copy of the film for this review.