Serge Bromberg started Lobster Films in 1985 in Paris and since then, along with associate Eric Lange, they've been scouring Europe looking for, and preserving, silent features and shorts and other old film. They have been so successful in their endeavors that M. Bromberg now showcases their discoveries twice a year in a performance he's dubbed Retour de Flamme (Back from the Flames.) (He also presented a version of the show at last year's SF Silent Film Festival.) Most of the films screened at these presentations are transfers from the only existing copy but they aren't only rare, they are entertaining. In region two a series of Retour de Flamme DVDs have been released (they are up to volume six I believe), and at long last some of these rare films have made it to region 1. M. Bromberg has partnered with David Shepard and Blackhawk Films' impressive library of rare movies to create a wonderful three-disc set entitled Saved from the Flames. Released by Flicker Alley, the set is filled with 54 funny, interesting, amazing and very rare films. 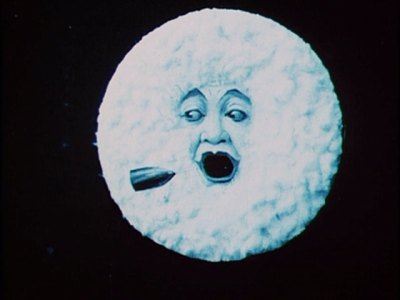 Collections of early films, while they are all different, often include the same handful of famous movies. While this set does include Exiting the Factory and Arrival of a Train two of the earliest films projected for an audience, the versions included here are rarely shown alternate takes of these important film. One of the reasons this set is so new, is that many of these films were made in Europe. There's a good possibility that many of them never made it across the Atlantic for exhibition, which explains why they never turn up in collections assembled in the US.

The movies are arranged by theme, with each program making for a nice chunk of viewing. The first disc includes: New Beginnings - films before 1910 including some early sound experiments; Magical Movies - Melies-like trick films including Pathe's remake of Melies incredibly popular A Trip to the Moon entitles An Excursion to the Moon; Seeing the World - with movies of the Paris flood of 1910, a Paris fashion show (in color) from 1927, and a sound film of Lindbergh taking off on his famous flight to Paris. 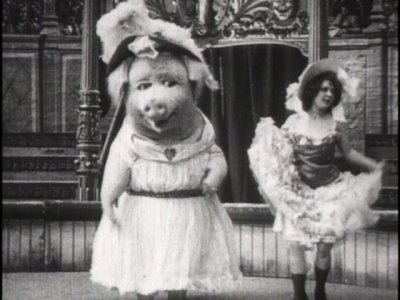 Disc Two is the most entertaining and has: Laughing like We Used To - an uproariously funny theme including the very bizarre Dancing Pig, the surreal Artheme Swallows his Clarinet, and a Stan Laurel short, The Pest; Drawings and Models - a group of vintage cartoons including early Technicolor and Cinecolor shorts, a sing-a-long, and a Ko-Ko the clown short; Grace Notes - featuring early sound films with appearances by Louis Armstrong and Duke Ellington.

The final disc wraps up the show with: Presuade Me - commercial films shown in theaters and to exhibitors including an MGM Promo reel with Laurel and Hardy, a George Pal stop-motion animated cartoon for Phillips Raido of Holland, and an appearance by Jacques Tati; and Tell Me a Story - narrative films with D. W. Griffith's For His Son, the Thoman Ince production The Heart of an Indian, and a Lois Weber short. The set wraps up with Stolen Kisses, a short reel of film that was censored out of other movies. This is three and a half minutes worth of film that the powers that be determined were to wild for audiences to ever see. A fitting end to a great set of shorts. 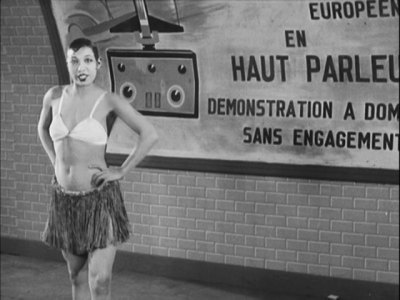 This is a truly wonderful set. I really enjoy early short films, but even I will admit it's hard to watch a whole disc of Keystone shorts in one sitting. With a nice mix of short and medium film and some truly enjoyable movies these discs just seemed to fly by (though I did limit myself to one disc per day.) My only regret is that there isn't more. The region two Retour de Flamme series has a chapter of a silent serial on each disc, and I would have loved to see at least the first one here. Hopefully there will be more similar sets released in the future.

Most of these films are silent and are accompanied by piano music. The names will be recognizable to many silent film fans: Rodney Sauer, Donald Sosin and Eric Beheim to name but three. These tracks fit the movies well and sound very good. The early sound films are naturally of a low-fi quality and a bit scratchy, but that's to be expected. 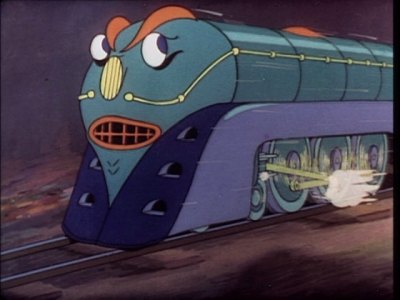 The video quality varies from film to film but overall I was very impressed. None of the movies were in horrible condition and some of them looked quite striking. In general the contrast was fine and the level of detail adequate. Of course these can't compare to the latest Hollywood blockbuster in terms of image quality, but fans of old film will find this collection very pleasing.

There are no extras...the main features are good enough. If they wanted to, they could have included some of these films under a "bonus feature" link from the main menu but what's the point?

This is a magnificent collection. Not only are these films rare and unusual, but they are fun to watch also. The Dancing Pig is a family favorite around my house, with kids laughing because "it's just so strange." There are a lot of historical films too, and hearing President Coolidge's stilted and dragging speech when he welcomed Lindberg home makes me wonder how successful he would be as a politician today. Entertaining and rare films, this is a must buy. DVDTalk Collector Series.