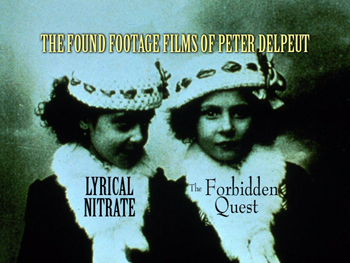 Dutch filmmaker Peter Delpeut has made a name for himself creating collage-like films using found footage. This two-movie set released a couple of years ago includes what is probably his most well-known piece, the silent movie homage Lyrical Nitrate, along with a more polished follow-up.

Lyrical Nitrate was conceived after Delpeut discovered a stockpile of old movies in an Amsterdam theatre. Made between 1905 and 1915, the silent films tucked away there were chemical nitrate prints, a highly unstable and finite process. These long unseen movies had basically spent most of the 20th century rotting away, and only fragments of the original reels remained intact. Delpeut hit on a novel way to preserve them, and Lyrical Nitrate (1990) was born.

I'm sad to say, though, that I am more in love with the idea than the result. Lyrical Nitrate is a visual poem stringing together a variety of different clips from the material that Delpeut found. He doesn't attempt to construct a narrative so much as he composes a lovesong to early cinema. He arranges many of the snippets based on their relation to each other, finding recurring images and visual motifs to illustrate the tropes and styles that informed early moviemaking. So, for instance, there are several shots of people looking through telescopes or binoculars, and Delpeut has crafted a rapidly changing montage of what they have seen. He also has found some sequences wholly intact, and they work like little one-act plays touching on love, loss, and death. By the end of the feature, he even works with the deterioration, as the film of the Garden of Eden (ending with the beginning, as it were) turns into an abstract painting come to life, a soupy swirl of light and color.

Delpeut smartly keeps Lyrical Nitrate short, cutting it off at 50 minutes. I am not sure that the concept could have sustained much more than that. Though the compiler has a strong instinct for following his own stream of consciousness, and the music he uses to enhance the images is will chosen, I found the film more interesting than engaging. I enjoyed it from a level of appreciating individual moments and the overall skill of the editing, but not so much as a rounded viewing experience. 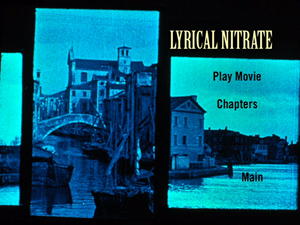 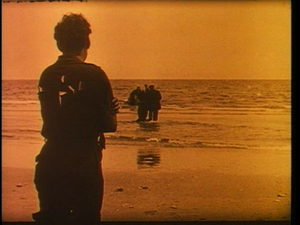 For The Forbidden Quest three years later (1993), Delpeut used stolen pieces from a large group of films about sailing and wintry climates to form a narrative about a 1905 Dutch expedition to Antarctica. The older images are used to illustrate the reminiscence of the last surviving member of that adventure's crew, the ship's carpenter J.C. Sullivan (Joseph O'Connor). In new material shot for the movie, the actor tells his story of traveling to the South Pole, and Delpeut cuts between his performance and the found footage, which, in this fictional world, was shot by a cameraman traveling with the explorers. The carpenter's story has mystical elements, including hidden tribes of Eskimos on Antarctica and a passageway that is believed to take men from one Pole to the other, but instead takes them to realms beyond our world.

The Forbidden Quest held my interest more than Lyrical Nitrate, but the pace of the story never changes, and O'Connor's voice started to lull me into sleepiness. Having a nearly 50/50 ratio between old and new footage is a miscalculation that prevents Forbidden Quest from reaching its true potential, and seems to miss the point of why we would watch these found-footage films in the first place. Seeing the men traverse the frozen tundra is far more interesting than watching an actor sit and talk to the camera. Again, though, the movie is short (71 minutes), and so doesn't take a lot of time to get through.

Video:
Both features are in full frame, 1.33:1. The transfers are really good, without any new problems added to the film that isn't a result of the decay of the old nitrate transfers. Resolution is solid, with no pixilation or ghosting.

Sound:
Lyrical Nitrate is a silent movie with musical accompaniment, mixed in a fairly standard stereo set-up. The music sounds good, with no distortion. The intertitles are in Dutch, but there are English subtitles for them.

The Forbidden Quest has an English soundtrack, and is mainly narration with a little music. It, too, has a solid audio track.

Extras:
None, except for a paper insert with chapter listings, credits, and a catalogue of sources that Peter Delpeut used to compile the movies.

FINAL THOUGHTS:
While I appreciate Peter Delpeut's experimental impulses and his creative solution to film preservation, I find that his films are better as ideas than they are as actualities. This DVD, Lyrical Nitrate/The Forbidden Quest, packages two of his better-known films on one disc. Lyrical Nitrate is a collage of found footage from a stockpile of old silent films that the director fashions into a kind of visual poem in tribute to moviemaking, whereas The Forbidden Quest uses clips from maritime adventure films and documentaries to make a new story about a bizarre quest across the South Pole. Though both films are mercifully short, they aren't terribly engaging. Rent It to appreciate the creativity, but don't expect either film on the DVD to touch your soul. 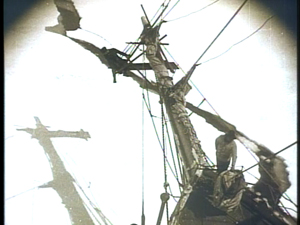 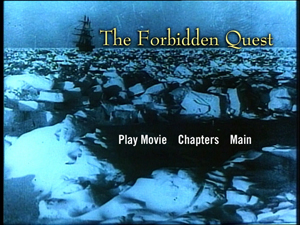