Winner of four awards at the Havana Film Festival, including Best Screenplay, Chilean director Matias Bize's En La Cama a.k.a In Bed (2005) relies only on two actors to tell a magnificent story of love, betrayal, and everything else that divides the two sexes. Funded by FONDART (Chille) and NRW (Germany) pic goes a long way in proving that great cinema does not have to be expensive.

Daniela (Lewin) and Bruno (Valenzuela) don't event remember their first names. They met in a bar, had a drink, and headed straight to the closest hotel. Now havving made love for hours the two begin to question each other, starting with who the other person is. Past relationships, untold secrets, even the most intimate of desires are quickly shared. After all this is a one-night stand, nothing will ever leave the hotel room. But in the wee hours of the night the two strangers begin to doubt sex is all they care for.

Impecably-scripted and marvelously acted In Bed is an honest and at times raucny film about love. Only unlike most traditional films about romance where sex comes after a fair amount of foreplay here it all begins with a passionate rendezvous. Then comes the emotional part.

Unlike other films about contemporary relationships In Bed also does not suffer from excessive sentimentality. Daniela and Bruno know why they are together and do what needs to be done in a timely fashion. Only instead of bidding goodbye and forgetting about each other, like most one-night standers do, they decide to talk.

The talk is extensive. The clichés normal couples struggle with quickly shake up what should have been a painless affair and the duo offers a great look at why modern and relationship are increasingly considered as incompatible. More importantly, the moment "responsibility" enters the story In Bed becomes quite the gem.

So, why is sex so crucial? It does not degrade those who perform it. It also sets the tone for an edgy but as far as I am concerned believable transformation of two people whose instincts are telling them that more might be on the horizon. They say that true love comes knocking when you least expect it, right? 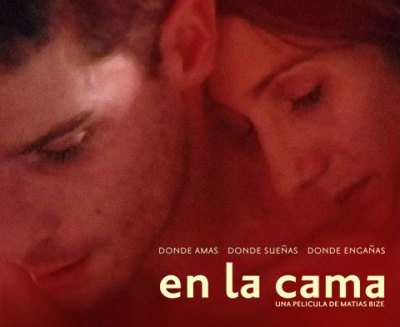 I had to do a little bit of research to find out why this disc isn't enhanced for widescreen TV's. As it appears even the R4 isn't 16/9 enhanced so my guess is that Koch Lorber Films have simply used the same master for their release. With this in mind the actual print is watchable but far from being impressive. The image is soft, hazy, and at times lacking proper definition. There aren't any major issues to report in terms of damage/scratches/etc. but the fact that the film lacks anamorphic enhancement is indeed enough of a reason to conclude that average is the best description we could attach to it. The original aspect ratio of 1.85:1 is preserved.

The film arrives with a Spanish DD track and optional English yellow subtitles. As this is an entirely dialog driven feature the presentation is adequate. I did not detect any audio drop outs/hissings.

This disc offers a great deal of supplemental materials. In addition to the original theatrical trailer and TV spots there section of interviews where the director explains how the film was made possible and specifically the fact that only bare essentials were required to completed the story (two actors, a motel room, and a hand-held camera). Additional comments from the cast are also included further elaborating on Bize's words. Next, there is a short collection of rehearsal scenes without any supporting commentary. Next, there is a short film by Bize titled Calling (winner of the Best Actress Award at the IV International Digital Film Festival at Isla de la Palma-Canarias). The entire story consists of a phone call addressing a broken relationship. Next, there is a montage of stills from the "behind-the-scenes". Finally, there is collection of subtitled deleted scenes most of which do not appear to be adding substantially to the story.

I enjoyed this film a great deal. Its premise is fascinating and the manner in which the story is assembled is fantastic. There is very little here that did not look and sound utterly convincing. The DVD presentation is somewhat lacking in the video department but given that even the R4 release is of identical quality I feel comfortable in recommending the R1 to you.