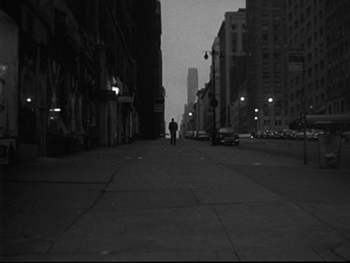 I was fortunate enough to see Blast of Silence sometime back in the mid-1990s when it was part of one of the then-regular film noir festivals at Cinema 21 in Portland. I would buy a book of tickets the week before the shows and try to catch every film in the line-up I had not seen before, sitting in the front row until my butt was numb and my eyes bleary. Blast of Silence was an oddity, as I had not even heard of it, nor seen in mentioned in any noir books, and its 1961 release date placed it much later on the historical timeline than most of the other fare. This unrefined gem was a real surprise, a quick shock to the system that didn't hold back, like a point-blank meeting with a snub-nosed revolver.

Made on the cheap by writer/director/star Allen Baron, there is no other film like Blast of Silence, an independently made hardboiled crime picture. You can tell right away that it's not going to be the same old production. Opening on an almost entirely black screen, it's hard to tell if the pinprick of light at the center is supposed to be there or if it's some kind of problem with the print. As the white circle shakes and begins to come closer, the gravelly voice of B-movie perennial Lionel Stander seems to address the viewer directly, speaking in a second-person "you." He speaks of your birth, how it hurt, how your mother screamed, and even how the doctor slapped your bare bottom as the camera finally breaks through and shows the inside of Penn Station. New York has been rushing toward you the whole time. Most Hollywood directors used train tunnels as a metaphor for sex, Baron births himself out of that underground canal, stepping onto the platform as a cold-hearted killer.

Coming in from Cleveland for a yuletide killing, Frank Bono is a solitary hitman who finds solace in the work he does. The voiceover continues, acting as a kind of taunting conscience, egging Frank on while also exposing his Freudian hang-ups. He grew up in an orphanage, he has painful memories of Christmas, he doesn't particularly care for women and he definitely hates his father. What he likes is being alone and the peace when the voice in his head goes quiet.

Blast of Silence follows Frank as he plans his hit. He cases the target (Peter H. Clune), buys a gun from a repugnant former colleague (Larry Tucker), and searches for the best possible angle to do his job. Baron shoots on the streets of Manhattan, using real nightclubs and apartment buildings to capture the quirky details of life in the city, on the outside (who is on the streets, where they go) or the inside (where someone hides his money, the gifts we bring a lover). (There is at least one constructed set, an apartment used for a party.) Cinematographer and producer Merrill Brody has a few rough stylistic edges, but even they serve to add to the from-the-ground feeling of the production. He makes the most of cramped spaces, using natural shadows for improvised composition. Given the documentary style and the warped voiceover, Blast of Silence is a bit like the less-sophisticated, knob-kneed cousin of Jules Dassin's The Naked City and the TV show that spun off from it.

I wondered at one point what the movie might be like without the narration. Written by Waldo Salt separately from Baron's screenplay and penned under the name Mel Davenport, it's ever-present, even moreso than the jazzy Meyer Kupferman score. Take it away, and Blast of Silence would be more like one of Jean-Pierre Melville's Eastern philosophy crime pictures. Yet, without it, Baron would not be able to convey the sense that something is dogging Frank. This job is the assassin's unraveling. Running into a guy who used to bully him at the orphanage (Danny Meehan) and his sister (Molly McCarthy), Frank lets his guard slip. He begins to make mistakes, to yearn for things that only get in the way for a man in his profession. The hard edges get soft, he feels loneliness at the holidays and regrets for the past just like the rest of us. There are only two options left for Frank to get the silence he craves: get the job done or get out altogether. Not for nothing does Baron play Frank as stony and stiff, looking almost unprofessional next to the other actors; they are more mannered and lively, real characters played by real people, while Frank is just a shell.

There are films with more polish than Blast of Silence, but that's okay. In some ways, the unsanded corners of this film put the boot into old film noir and how the bad guys were prettied up. Inside Frank Bono's head, we hear about hate and pain and the things a man can't escape, film noir concepts that weren't always given those blunt terms. Shot as it was, Allen Baron's movie brings the struggle to life, illustrating the need to get ahead and to get the filthy jobs done. The fact that Baron and Merrill and the rest got theirs done, putting together a one-two punch of a film, is illustration enough of what that means. 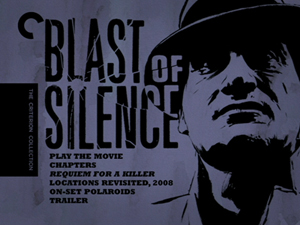 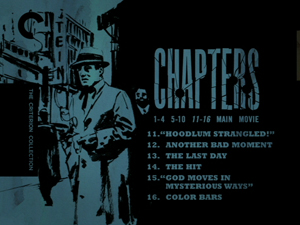 Video:
The full frame, black-and-white picture on the Blast of Silence - Criterion Collection DVD is remarkable. It shows none of its age, no signs of neglect. The photographic details of Manhattan shine through, and the gradations of black and gray are precise.

Sound:
The mono soundtrack is also surprisingly clear, with no hiss or background noise. The dialogue is sharp, and the music sounds really good.

Subtitles are available for the deaf and hearing impaired.

Extras:
Blast of Silence - Criterion Collection is packaged in a clear plastic case with printing on all sides of the cover. The front image, menu design, and all of the interior images were done by comics artist Sean Phillips, whose own Criminal series with Ed Brubaker tells tough-minded crime tales in the tradition of Blast of Silence. Having Phillips' art throughout gives the packaging a wonderful design unity. In addition to the regular Criterion booklet, which has an essay by critic Terrence Rafferty, an extra four-page insert by Phillips adapts some of the Waldo Salt voiceover from the film into a brand-new promotional comic. It's a very cool extra.

Beyond the packaging bonuses, there are four features on the DVD itself. Two are photo galleries, including one of Polaroids from Allen Baron's set and a new collection showing the Blast of Silence locations today. The new photos are juxtaposed with images from the movie, and some of the new ones even feature Baron. There are title cards in between explaining what you are seeing.

The original theatrical trailer is like a mini film unto itself, lurid and intriguing all on its own. It makes the audience's pact with the killer implicit. "You will walk side-by-side with Frankie Bono!"

The final extra is a brand-new, hour-long documentary called Requiem for a Killer: The Making of Blast of Silence. It's both a biography of the film and of Allen Baron, of his love affair with the city he grew up in, how he got into cinema, and how he made this impressive debut. Culled from an older German TV program, it's built around Baron taking us on a walking tour of Manhattan, telling us a ton of great stories of the time when Blast of Silence was made. The revelation that he had been a cartoonist makes the comic book stuff even more apropos.

FINAL THOUGHTS:
Highly Recommended. Blast of Silence is exactly what indie cinema was always meant to be, with unknowns breathing new life into old genres. Allen Baron's 1961 cult classic is a broken-nosed throwback to the film noir of the previous two decades, but with far less polish. Shot on the streets of New York, the gritty tale of a hitman on the job that will prove to be his undoing, it's more than just another B-movie, it's a blood, sweat, and tears production of a writer/director/star looking to make a name. There's not much else like it, and it used to be a rare sight on the festival circuits. Now, thanks to the Criterion DVD, Blast of Silence is out there for everyone to discover. 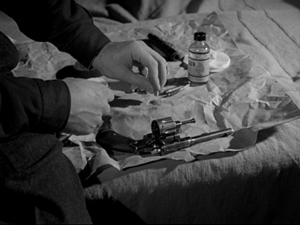 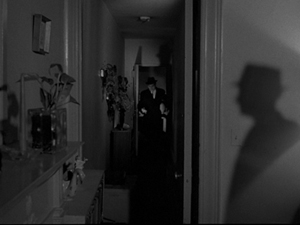