Nova: Secrets of the Parthenon

WGBH Boston Video has released another engrossing Nova documentary, Secrets of the Parthenon, that looks at not only the 30-year (with at least 10 more to go) restoration of the Parthenon, but also the secrets behind how the temple was built and the absolutely astounding craftsmanship as well as visual trickery that went into building what is regarded as the very symbol of the ideals of Western civilization. Part detective story into the methods used by ancient builders to achieve this marvel of architecture and sculpture, and part This Old Temple, where we see the current laborious, painstaking restoration process, Secrets of the Parthenon is a fascinating exploration of what seems like - then and now - and almost impossible task marrying science, beauty and art. 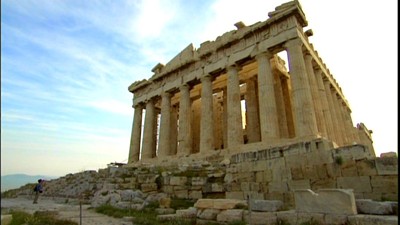 And of course, with the ideals of science, beauty and art - as well as democracy - being the very foundation of the Golden Age of Greece and therefore the cradle of Western civilization, it's vital that the single greatest architectural expression of that civilization - the Parthenon high atop the Acropolis in Athens - should not only be preserved, but also studied to understand how the Greeks incorporated their beliefs into the very blocks of marble that make up the temple. And time, according to Secrets of the Parthenon, is of the essence. For thousands of years, the Parthenon was abused by war, neglect, earthquakes, and certainly most ironically, by disastrous restorations attempts in the early 20th century that did much more harm than good for the increasingly fragile temple ruin. Perilously close to tumbling down, a team of archeologists, stone masons and architects have been working for thirty years to try and not only stabilize the structural integrity of the temple, but to restore it (not to its original formal glory, but to its accepted ruin iconography of the last centuries - more about that later).

And that process, once one sees Secrets of the Parthenon, seems like a Herculean, impossible task. When I took art history lessons in college, I remember (or at least I think I remember) discussions of the Parthenon in the context of the absolute perfection of its proportions (the "Golden Ratio," the Greeks' mathematical formula for beauty, was for quite some time thought to be the grounding aesthetic principle behind the Parthenon's design - a notion that Secrets of the Parthenon says has now been largely rejected by scholars). And when one thinks of "absolute perfection of proportions," naturally, one might assume that the Parthenon is made up of perfectly sized, interchangeable parts that can be mixed and matched at will, making the restoration process a relative snap (something previous restorers incorrectly assumed in their efforts at rebuilding).

However, upon closer examination according to Secrets of the Parthenon, the Parthenon is in reality an astounding visual fancy, if you will, that incorporates optical illusions worked out for centuries by the Greeks prior to the Parthenon's construction. How ironic, then, that the very symbol of Western perfection - with "perfection" in building assumed to mean absolutely geometric balance and symmetry - has almost no "true" right angles or straight lines in the entire structure? The ancient Greeks, in their almost spooky cosmic level of insight, were able to work out that in order to achieve a visual representation of perfection, the Parthenon in actuality had to "cheat" true perfection by subtly curving columns and foundations. Thus, the Parthenon can not only be seen as the ultimate expression of architectural beauty in context with Western ideals, but also as the penultimate sculptural representation of the Greek ethos.

What's rather overwhelming to consider, though, once one watches Secrets of the Parthenon, is - to put it quite plainly - just how the hell did they build that thing? Listening to the architects and archeologists who have been working on the current restoration for decades (Cathy Paraschi is particularly compelling in her appreciation of the Parthenon craftsmanship), the precision and engineering work that went into rendering 100-ton slabs of marble from quarries, shaping and grinding them into column drums and capitols with variances of less than fractions of a millimeter, rivals and surpasses anything modern builders can do today - even with all the computer technology in the world. And what's even more amazing is that the ancient builders did all of this in about eight or nine years with what many architects and builders today would describe as the crudest tools and methods of measuring - in less than a fourth of the time the current restoration process will take just to put the ruin on stable ground. 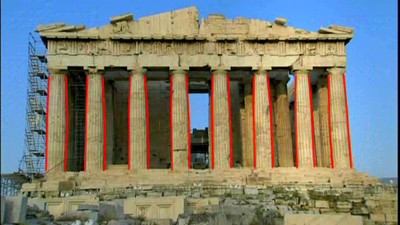 As Secrets of the Parthenon frequently states, the only way the restorers could put the Parthenon back together correctly, was to decipher the ancient building and design techniques that the original builders used for the Parthenon. Millennium of abuse and neglect has left a large portion of the temple ragged in appearance, with many of its marble blocks cracked and split apart, and strewn about the site - or missing altogether. But enough has remained for scholars to eventually conclude (or at least strongly hypothesize) that builders of the Parthenon temple must have used some kind of conversion table (like the famous Salamis Stone) that conveyed the various classic measurements (the Doric, Ionic and "common" feet) that scholars believe were in turn based on the Greek idealization of the perfected human form. These conversion tables would give the various builders (who, since there were no "standardized" tools, would have differing scales of measurement) a standard measure to which they could easily calibrate their tools while providing the accepted "norms" of the basic units that went into designing the temple.

Which is fine, if one is just discussing how the builders were able to execute the design of the temple. But how did the designers actually replicate the required optical illusions (such as the curved entasis of the columns) on such a massive scale (the documentary states that the curves are so subtle on the huge columns that only a computer can accurately draw them)? To replicate such a curve on a full scale, the designers would have had to use a compass set at a radius of one mile - an impossible task. Interestingly, Secrets of the Parthenon details how a German archeology team, headed up by Lothar Haselberger, discovered the "trick" of the Parthenon entasis, in a Greek-designed temple in Turkey: a scaled-down template used to create the entasis curve, etched right into the stone (which was probably polished off the Parthenon blocks), which any stonemason at the time could have transferred with his tools.

Understanding the processes that went into building the Parthenon is one thing, but the actual restoration is quite another (as stated in the documentary, the Parthenon is like a 70,000 piece, 20,000 ton jigsaw puzzle with no instructions). Computer assistance in cataloging and identify pieces of marble - no matter how small - certainly aided the restorers, but eventually, drawings of the various pieces were produced and shuffled around, with the restorers having to rely on the human eye and the laborious fitting and refitting of pieces to ascertain exactly where every piece needs to go - a seemingly impossible task. As stated in Secrets of the Parthenon, the restorers want to use every single piece of available ancient stone in the restoration, and that new marble, laboriously hand-carved within fractions of millimeters to fit with the new stone, will only supplement the old. This is perhaps where Secrets of the Parthenon lets the viewer down just a bit (no doubt exacerbated by the short 54 minute running time). After watching the incredible efforts that are going into restoring the Parthenon, we hear at the very end of the documentary, in just one short statement - with no context - that the restorers have decided to keep the Parthenon at its "ruined" status. It won't be fully restored. Why or why not? We don't know, because the documentary doesn't delve at all into this crucial aspect of the restoration. While I can see both sides of the argument (personally, if you're going to go to all that trouble, and you're "aiding" the original structure with new marble and new joinery techniques, why not restore the entire temple to its former glory?), I would have liked more than just one sentence on what must be the very reason for this restoration. 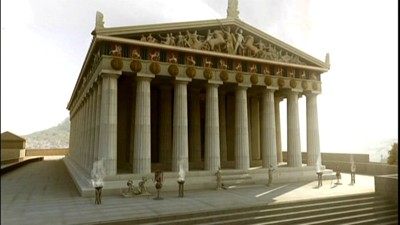 The Video:
The anamorphically enhanced, 1.78:1 widescreen video transfer for Secrets of the Parthenon looks razor sharp, with a bright, hard, clean image and no compression issues whatsoever. Color values are correct, and blacks hold.

The Audio:
The Dolby Digital English 2.0 stereo audio mix is entirely adequate for this kind of documentary, that relies on mostly on dialogue. Close-captions, as well as descriptive video, is available.

The Extras:
Extras are relegated to DVD-ROM features, which are merely some questions teachers can print out for a possible quiz on Secrets of the Parthenon, and access to the Nova website.