Warner Bros. // Unrated // April 22, 2008
List Price: $19.98 [Buy now and save at Amazon]
Review by Stuart Galbraith IV | posted May 2, 2008 | E-mail the Author
Samuel Fuller's film of Merrill's Marauders (1962) is a colossal mess of a movie. Just as its rousing, heroic title is at odds with its grim screenplay*, the movie is as much at odds with itself as its G.I.s are with the Japanese. Fuller saw the film as a "dry-run" for his longtime personal project, The Big Red One (ultimately not made until 1978), but the studio disliked many of Fuller's directorial decisions. They eventually took it away from him, reshot scenes and altered the film during post-production. In the end, conventional Hollywood war movie cliches constantly muck up occasionally interesting bits and pieces of film, though even Fuller's version seems to have had its share of problems.

Adding the to the film's troubles is that much of the film appears to have been shot flat (i.e., for cropped widescreen projection) but married to other scenes shot in 'scope. Most viewers probably won't notice this almost unique problem, but it will drive sharp-eyed viewers nuts. More on this below. 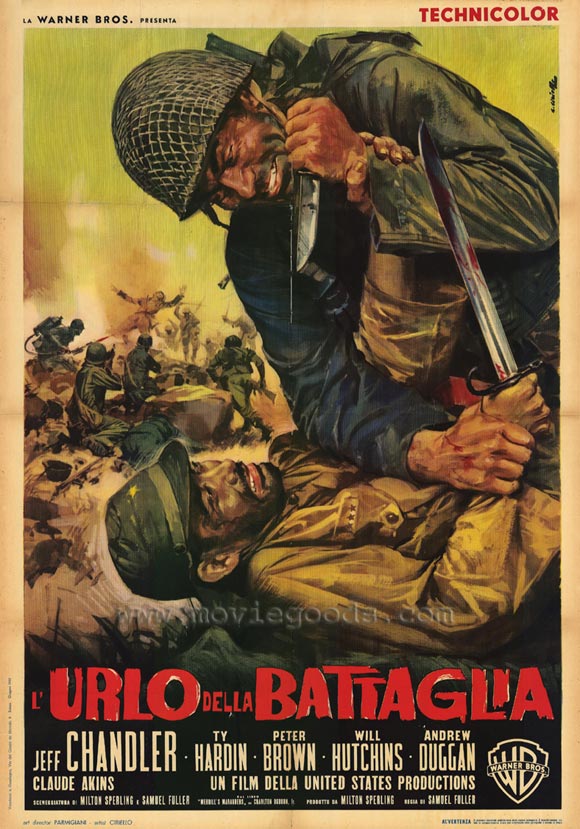 The picture traces the efforts of a long-range penetration special forces unit, dubbed "Merrill's Marauders" by the press, to recapture Burma from the Japanese in early 1944. Most of the action centers around Brigadier Frank Merrill (Jeff Chandler), who pushes his men past the point of normal human physical and psychological endurance; and reconnaissance platoon leader Lt. "Stock" Stockton (Ty Hardin) and his men.

Merrill and Stockton have the kind of father-son/master-pupil relationship often found in war movies. Merrill thinks Stockton will make a great leader if he'll only learn to keep an emotional distance from his men. Stockton, for his part, gradually comes to believe that Merrill is asking too much of the soldiers under his command. One extended mission becomes two then becomes three, a 700-mile trek through the jungle where the 3,000 troops face starvation, typhus, and what medical officer Capt. "Doc" Kolodny terms "A.O.E.": an "accumulation of everything." At one point, none of the soldiers can remember what day of the week it is, with some not even able to differentiate between a.m. and p.m.

The picture is a strange jumble of the inane and the perceptive. Fuller, an infantry veteran who witnessed some of the fiercest fighting of the war in Europe, co-wrote the script with producer Milton Sperling (Battle of the Bulge) and in all likelihood he's responsible for the film's little flashes of authenticity. For example, the sound effects of gunfire is much closer to the real thing, the kind of "pop-pop-pop" that's closer to what one hears in a documentary about Vietnam or Iraq than a Roy Rogers Western. Even here though, Fuller's efforts seem to have been compromised, as more conventional sound effects at times appear to have been layered on top of the more innovative sound work.

More significant are the quieter moments with ordinary soldiers. There's a great little scene when a physically and psychologically exhausted Sgt. Kolowicz (Claude Akins) looks up and realizes that an old Burmese woman and a young boy are hand-feeding him little pinch-fulls of rice, as if feeding a baby. Overcome with emotion, he breaks down. In another good scene, a dogface near death suddenly sits up demanding to know, "Did Lemchek make it?" before expiring.

Looking over the dead body, Merrill asks the medical officer, "Did Lemchek make it?"

Unfortunately, there's not nearly enough of this in the finished film, which reportedly was altered quite a bit to conform to Warner's ideas of popular entertainment. There's far too much underscoring, some of it written for the film by Howard Jackson, some culled from Franz Waxman's old score to Objective, Burma!. There's also a lot of narration, too many maps and the picture is bookended with wartime newsreel footage.

Worse, other scenes were re-shot, dropped or altered, notably one involving friendly fire during a particularly costly battle. Still, even Fuller's film has its share of problems. Though shot in the Philippines, the location isn't used well; for all their effort it might just have been filmed in Hawaii, particularly as the terrain chosen looks nothing like Burma. For that matter, the Japanese soldiers, their uniforms, Japanese-language signage, etc. is notably phony to anyone familiar with them. Fuller's script also has its share of genre cliches, most painfully a handler's (Charlie Briggs) fondness for "Eleanor," the platoon's straw hat-wearing mule.

The film was Jeff Chandler's last and released a full year after he died. The actor injured his back during production and died of blood poisoning following a botched operation to fix the problem. Except for Akins, Chandler's the only other actor in the cast to make a lasting impression, though his intelligent, low-key performance is somewhat wasted on a clichéd character. Ironically, his character almost drops dead several times in the film owing to Merrill's coronary thrombosis.

Reference sources list Merrill's Marauders as a CinemaScope production but I'm skeptical about this. There's no CinemaScope credit anywhere on the film, in the trailer, or on any of the advertising. Though (Prints by) Technicolor is duly noted, the anamorphic wide screen process goes uncredited. (The film's Wikipedia entry also errs in calling Merrill's Marauders the "final film made in CinemaScope," a dumb mistake that even Wikipedia contradicts.)

What seems to be at least 10-20% of the time, individual shots are obviously over-stretched so that actors' faces, helmets, etc. become distorted, i.e., squished and stretched horizontally. A similar problem occurred in X-15 (1961), a Right Stuff-type melodrama about test pilots. In that CinemaScope film all the aerial footage was, stupidly, shot flat and for some unfathomable reason not converted to 'scope (as in the SuperScope process), thus elongating the experimental jet aircraft to the point where they looked like toothpicks.

Because of the jungle setting, the lack of recognizable structures, automobiles, etc., combined with the near-constant chaos of battle, there's a certain lack of visual points of references, meaning that the frequent distortion probably went unnoticed by most 1962 audiences. What happened? I have no idea. Maybe it had something to do with the use of actual CinemaScope stock footage from Battle Cry (1955) though that doesn't make much sense, either. (See below for information about the film's trailer.)

Though the DVD minimally cries out for notes on its troubled production, the only extra is a trailer introduced by a Merrill's Marauders veteran, Lt. Colonel Samuel V. Wilson (later to create the Delta Force!). The trailer is full-frame, and further adding to the mystery some footage in it is open-matte while other shots appear to be panned-and-scanned. Again, no wide screen process is credited.

Merrill's Marauders is a "what might have been film" that, even in this bastardized form, hints at greater things. It may not be on a level with, say, Peckinpah's Major Dundee but fans of director Samuel Fuller will want to see it, in spite of that bizarre aspect ratio issue. For general audiences though, it's just another cliché-ridden war movie. Rent It.

* Okay, Merrill's Marauders is the name of the unit, but to my ears it still conjures up images of a rollicking wartime adventure-comedy, something like Kelly's Heroes or Garrison's Gorillas.