Zipporah Films // Unrated // Region 0
List Price: $29.95 [Buy now and save at Zipporah]
Review by Chris Neilson | posted May 14, 2008 | E-mail the Author
In 1975, when PBS first aired Frederick Wiseman's documentary, Welfare, examining the war on poverty from the trenches of a New York City welfare office, no contextual explanation was needed. Everybody in America was as familiar then with the war on poverty as we are now with the war in Iraq. More than thirty years on though, a bit of contextual knowledge may be needed to fully appreciate this documentary.

In 1964, President Johnson declared a war on poverty in the United States. He pushed through legislation to establish social security for the aged and infirmed and welfare programs for the poor. Collectively, social security and welfare halved the poverty rate in the United States from historic levels of 20-25% prior to 1964, to 10-13% by 1975. Though many of Johnson's welfare programs were attacked for incentivizing single parent households and endemic multi-generational poverty, they continued on largely intact until President Clinton dramatically curtailed them in 1996.

In the mid-70's, New York City's public assistance programs in the form of food stamps, cash payments, and public housing had the reputation of being one of the most generous in the United States. Hundreds of thousands of poor Americans emigrated to New York City, especially from Puerto Rico and the south, to apply for welfare. In fact, during this period, one in three new NYC residents qualified for public assistance, and the city's welfare bureaucracy was under great strain to accommodate the dramatic increase to the welfare rolls. It is against this backdrop that Welfare is set.

Though Wiseman recorded more than 100 hours of footage in a NYC welfare office over a three week period, Welfare is edited to appear to be a single day. Clients enter into a large central floor take numbers and wait to see social workers. Though the room is very large, there're so many people, chairs, desks, and file cabinets crammed into the mostly undivided space that the general roar of chatter and the screen of cigarette smoke are the only pretense of privacy afforded to anybody. Wiseman continuously reminds the viewer of this lack of privacy by shifting the camera from casework interview to nearby waiting clients and back throughout the film.

Wiseman manages to make the processing of clients nearly as dispiriting for the home viewer as it must have been for the case workers and clients themselves. While a few of the clients appear to be able-bodied opportunists exploiting the system, most appear to be mentally ill, mildly retarded, physically infirmed, or some combination of the three. Almost nobody seems to get anything resolved. Nearly everyone is told that they must come back tomorrow for another appointment with someone else, or that they need to go to another office across town, most commonly to the Social Security Administration. 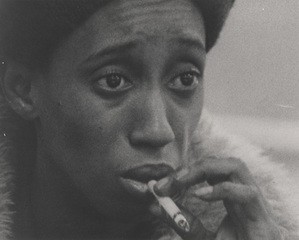 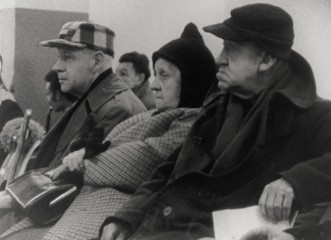 The case of Valerie Johnson (shown above on the left) is presented in a lengthy but matter-of-fact way, suggesting it is meant to be taken as typical. Valerie has come to the welfare office because she's not been receiving the housing assistance she's due, and she's about to be evicted. Valerie appears mildly retarded, and this judgment is confirmed by a group of other clients who stroll in and out of the scene to comment on Valerie's case. Neither the case worker nor her supervisor can locate Valerie on the office's welfare rolls. The case worker calls another branch office, and determines that they have a Valerie Johnson on their rolls but with a different social security number, no date a birth, and a slightly different address. Valerie claims that's her, and tries to explain the discrepancies. Unable to sort anything out conclusively, the case worker asks Valerie to come back tomorrow, though it's unclear how things will be improved then. Valarie finally leaves in visible distress. Her unsuccessful effort to get a check for her rent consumes twenty-four minutes of screen time, though it feels much longer.

Wiseman shows numerous other clients shunted off to other offices or told to come back tomorrow. In fact, the only clients who leave fully satisfied are a couple who appear to be the least deserving. This couple is seeking expedited "emergency" welfare payments and a place to stay. Under questioning from the case worker, the following details come out in dribs and drabs: the couple is married, but not to each other; the woman seems slightly mentally ill and claims various physical ailments; the man appears able-bodied, is quick to lie but not good at it, and is a former Social Security Administration supervisor. Despite receiving nothing but incomplete, evasive, and conflicting statements from the couple, the case worker approves their claim and they receive a check and an apartment, and leave in slight disbelief and great relief.

Like Ken Burns, another PBS darling, Wiseman seems to make documentaries as long as they need to be to present the story he wishes to tell, though Wiseman's stories are not nearly as cleanly segmented for television as those of Burns. Welfare is 167 minutes long and has no clearly demarcated division. It appears intended to be taken in on a single viewing, but if you have a lunch break between the first and second disc, you should be able to fully capture the feeling of having spent a complete and frustratingly unproductive day at the welfare office. At the end of nearly three hours, the viewer is as dispirited as the caseworkers and clients, and this likely is Wiseman's subtle purpose.

For over forty years, Wiseman has been making documentaries about American society and its institutions. From high schools, to juvenile courts, to basic military training, to hospitals, to prisons for the mentally insane, to zoos and beyond. Except for his first film, Titicut Follies, his work has not been overtly polemical. He uses neither narration nor musical accompaniment, and never stages his scenes. So subtle is Wiseman's directorial style that many reviewers have associated his work with the observational mode of documentary filmmaking originating with the direct cinema movement, though he has repeatedly disavowed this association. Unlike direct cinema which strove to present unmediated reality, Wiseman uses the editing process to manipulate the footage to serve the story.

At the conclusion of Welfare, the viewer is left feeling that the system isn't working, and likely with ideas for how it could be improved (e.g., co-locate the social security and welfare offices, make particular case workers responsible for particular clients, institute a computerized data system, replace the large open rooms with smaller suites perhaps in smaller neighborhood locations, etc.). Though Wiseman has carefully crafted much of this response, it seems he's done no more than present the facts and left it to the viewer to make sense of it, and this is the genius of his method. 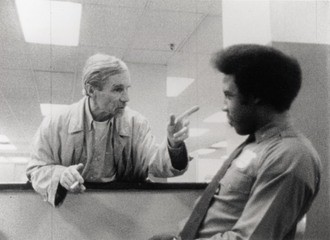 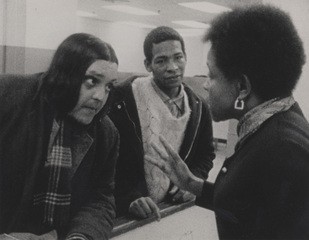 The DVD
Welfare is available for purchase directly from Wiseman's film distribution company Zipporah Films. Welfare is burned onto two DVRs, but comes in a standard-sized double alpha case with commercial quality artwork. There are chapter stops but no scene selection menu.

The Video:
Like nearly all of Wiseman's documentaries, Welfare was substantially funded by PBS for broadcast television. Accordingly, it was shot on 16mm film using a 1.33:1 aspect ratio which is preserved on this release. The black & white image shows some dirt, scratches and other damage, but these blemishes don't diminish the overall power of this documentary.

Final Thoughts:
If Welfare were depicting current practices then I'd wholeheartedly highly recommend this release, but looking back at practices that are largely long dead, this documentary appears less essential now. Though Welfare is still valuable as an insight into the method of a great American documentary filmmaker and as a historical record of welfare in New York City circa 1975, its relevancy has diminished with age.