Reaching deep at the heart of a conflict Russia has been unable to resolve diplomatically Alexander Sokurov's Aleksandra (2007) is a powerful film about war and those who suffer by it. Graced by an indescribably moving performance by opera diva Galina Vishnevskaya (the wife of late cello-virtuoso Mstislav Rostropovich) this is easily the Russian director's most accomplished work yet.

An old woman (Vishnevskaya) heads to an "unknown" location on the outskirts of the Russian state to visit her son (Shevtsov) He is an officer who has been away from home for years, battling the enemy. The babushka arrives at a large military camp where soldiers are dispatched daily on secretive missions. Her son welcomes her.

After a few days of wandering around the babushka decides to attend a nearby market. Before moving through the camp's gate the soldiers beg her to bring back cigarettes and cookies. She agrees.

At the market where the locals sell whatever they have left to survive the babushka quickly befriends a woman who has miraculously survived the Russians and their bombings. The two head to her "home".

Even though in Aleksandra Sokurov never makes it clear where the military camp is located it quickly becomes obvious that the war in Chechnya is what troubles his mind. Recreating a conflict the Russian state has been unable to bring to an end the film delivers a strong message against war, those who continue to see it as a priority in Russian politics.

Relying on a breathtaking performance by Galina Vishnevskaya Aleksandra could have easily been a massive disappointment. Instead the opera singer's ability to transform incredibly ordinary-looking shots into extraordinary anti-war scenes is something I have not witnessed in cinema for a long time. This is an intimate film about war with a universal message. 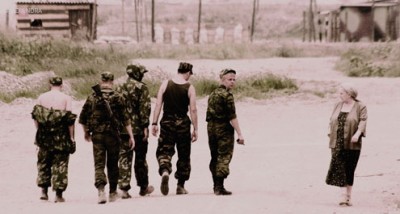 The political innuendo here will likely speak clearer to those who follow Russian politics. The deep wounds the war in Chechnya has incurred on the Russian state and in particular ex-president Putin's determination to squash the tiny region's rebellious attitude, resulting in an even deeper division between those who are still nostalgic for the state's Soviet past and those who have grown tired of the war, make Aleksandra that much more fascinating to deconstruct. There is something uniquely Russian here - a sense of enormous tragedy announcing the death of a once powerful state.

Shot in and around Grozny pic reunites Sokurov with cinematographer Aleksandr Burov (Father and Son/The Italian). The result is an intoxicating, hazy-yellow, color scheme which blends perfectly with the director's intended intimate storytelling.

In 2007 the film was nominated for Palme d'Or at the Cannes Film Festival.

Shot with a 35mm Kodak camera and framed by Sokurov in 1.77:1 the film arrives anamorphically enhanced, in a splendid package by Russian distribs "First Video". The image quality is flawless - the delicate yellow-ish color scheme is very strong, detail is impressive, and I could not detect any obtrusive examples of edge enhancement. The print is also in an immaculate condition, there aren't any debris, dust spots, or scratches. On the contrary this is a shiny looking and impressively transferred to DVD film with hardly anything one could be upset about. Furthermore, blown out through a digital projector the picture remains strong, tight to the frame, revealing excellent detail. To sum it all up this package is of exceptionally high quality bound to meet the expectations of even the most demanding of film collectors. PAL-encoded, Region-0. 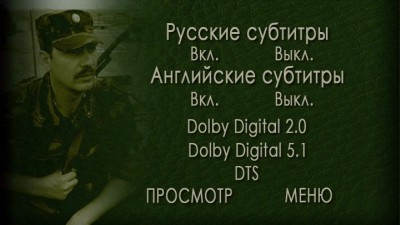 There are three different audio options here: a Russian DD, DD 5.1 and DTS tracks. The DTS track is indeed the most potent one and one could clearly tell that there is more depth in it especially when the lovely soundtrack is present. There is more activity in the rear-channels even though the mostly dialog-driven film does not utilize them to their full potential. The quality of the actual audio mix is also top-notch: dialog is very easy to follow and I did not detect any pop-ups, cracks, etc. With optional Russian and English subtitles. 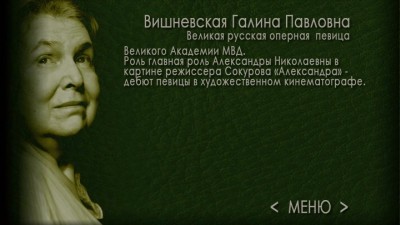 Aside from a section with filmographies, a slide show with the beautiful soundtrack on there is nothing else to be found here.

Easily the best import to reach my desk this year Sokurov's Aleksandra is a powerful film which regrettably is yet to make it to US shores. Fortunately enough this exceptionally good-looking package could be obtained for an excellent price. DVDTALK Collector Series.