Zipporah Films // Unrated // Region 0
List Price: $29.95 [Buy now and save at Zipporah]
Review by Stuart Galbraith IV | posted May 14, 2008 | E-mail the Author
A typically superb documentary by Frederick Wiseman, the made-for-TV Law and Order (1969) is a portrait of weary, sometimes testy Kansas City, Missouri police officers in the wake of the April 1968 riots there. Television producer John Langley, in his audio commentary accompanying the pilot for his show COPS, talks about seeing Wiseman's film many years later joking (I paraphrase), "Here I was being incredibly innovative - 20 years late!" Though Law and Order and COPS are different in subtle if fundamental ways, stylistically they're quite similar and Langley is right: just about everything good about COPS Wiseman was doing two decades before. 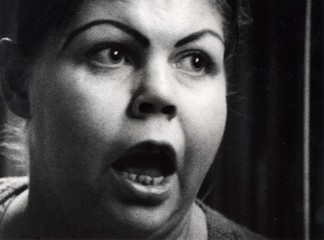 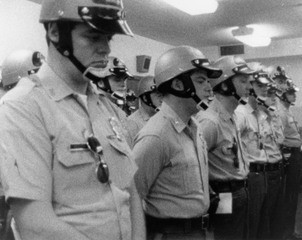 Like COPS, the 81-minute film has no narration and no story per se; it's a series of vignettes showing ordinary cops doing their job, from the tense, apparently single-handed thwarting of an imminent armed robbery to the mundane processing of alcoholics through Kansas City's drunk tank. One story, about a teenage car thief who threatens to kill his fellow African-American neighbors, is given a bit more prominence but like real cops on the beat the film ends without knowing the ultimate fate of those involved.

Like COPS, Wiseman and his crew ride along in patrol cars, studying crime scenes with probing held-held cameras (16mm vs. COPS' video), in one sequence searching bushes for a old woman's stolen purse. At times Law and Order's resemblance to COPS is extraordinary, particularly the way it captures officers chatting with one another about the day's events and their career goals. In his commentary Langley talks about how COPS genuinely shocked late-1980s viewers - very true, but in 1969 the equally raw Law and Order must really have blindsided its audience.

COPS, "dedicated to the men and women of law enforcement," is basically a Good Guys vs. Bad Boys, Us vs. Them show, though not emphatically so. On that series, the officers occasionally make bad decisions and sometimes their actions are less than flattering. Law and Order is subtly more objective and ambiguous. The late-1960s was an age of extremes - when cops were "pigs" for one generation while their parents embraced Nixon's 1968 "Law and Order" presidential campaign. One walks away from Law and Order not sure what to think. On one hand, some of the officers live up to negative stereotypes and, at least by 2008 standards, seem abusive to the suspects in their custody, yet they're also putting their lives on the line and their job actually seems more dangerous back then than it perhaps is now.

Back then the Kansas City force looked to be about 97% white men. When three of them arrest a black prostitute it certainly looks like one of the cops comes close to choking her to death with his nightstick (the scene is extremely uncomfortable to sit through), and later various cops manhandle and intimidate her with no female officers present to offer any oversight. Even more disturbing is that, minutes later, when the woman is begging officers not to choke her again, oblivious to the 16mm witness in front of them, in a patronizing tone they suggest she's imagining things.

Yet in other scenes white cops are shown positively interacting with the predominantly poor black community. They stand behind an elderly black woman when her taxi driver tries to rip her off. One white officer cares for a black toddler separated from her mother as if it were his own.

The film is an amazing, one-of-a-kind time capsule of an age when the closest thing to reality shows like COPS was watching Joe Friday bust acid eaters and drunk drivers every week on Dragnet '69. Made less than three years after the U.S. Supreme Court mandated Miranda warnings, cops here still betray an earlier age and frequently look ready to pound their suspects in the jaw. After one suspect goads an officer with insults and profanity the cop threatens him with, "The next time you open your big fat mouth I'm going to step in it."

Mostly though, like COPS the film seems to concede that the tidal wave of petty and violent crime, of prostitution, domestic violence, and drug abuse will likely never be eradicated, and that the police officers of Kansas City, working a largely thankless job (at the princely salary of around $6,500 a year) can do little more than put a lid on irresolvable issues.

Law and Order is presented in its original full-frame format, in an all-region transfer apparently made by Wiseman's own distribution company, Zipporah Films. (The DVD sleeve is professionally designed but obviously a color photocopy.) Filmed in 16mm and black and white, the image isn't flawless but generally good, as is the mono audio. I did notice a strange but minor transferring flaw: in the upper-left hand corner, a weird defect is visible in some shots that looks like that part of the frame is being filtered through screen door mesh. There are no subtitle options, and no Extra Features. It's a shame Wiseman isn't on hand for a commentary track.

If you've never seen a Frederick Wiseman documentary, the eminently accessible Law and Order is a good place to start. Like COPS it grabs your full attention and won't let go, yet it also goes to the heart of Wiseman's career-long interests in public institutions and their failings, and in areas mainstream society generally prefers to keep hidden from public view: long-term psychiatric hospitals, meat processing plants, hospices, etc. Despite a lack of supplementary features, this is a must-have disc for anyone with an interest in documentary film and/or modern American history and societal issues. A DVD Talk Collectors Series title.