Zipporah Films // Unrated // Region 0
List Price: $29.95 [Buy now and save at Zipporah]
Review by Stuart Galbraith IV | posted May 16, 2008 | E-mail the Author
Like many of Frederick Wiseman's documentaries, High School (1968) makes for fascinating viewing even if when it's over you're not entirely sure what the sum of all its parts add up to. Wiseman's early films, most notably Titicut Follies (1967), had recognizable agenda, at least more so than his later, deliberately ambiguous work, where Wiseman clearly is inviting viewers to draw their own conclusions. High School is vaguely critical of an educational system dominated by discipline and conformity, where the disconnect between students and teachers is profound. In the four decades since, public schools have in some ways gotten better, and in others are much worse. Would a high school student in 2008 recognize the environment of Philadelphia's Northeast High of 40 years ago, or would it seem totally alien? I have no idea, but I saw a lot of the Michigan high school I attended more than 25 years ago.

Reading Chris Neilson's intelligent review of another Wiseman documentary, Welfare , I was surprised by his conclusion that, "Looking back at practices that are largely long dead, this documentary appears less essential now....its relevancy has diminished with age." I beg to differ. Movies aren't like fresh fruit that eventually goes bad and has to be tossed into the ashcan, nor are they necessarily like fine wine and improve with age. Sometimes movies are interesting because while the film remains locked in its time and place, we all age and our society evolves (or not); our changing perspective makes us look at the same film differently over time. Needless to say, Germany is no longer under Nazi rule but that doesn't make Leni Riefenstahl's Triumph of the Will any less interesting or relevant. 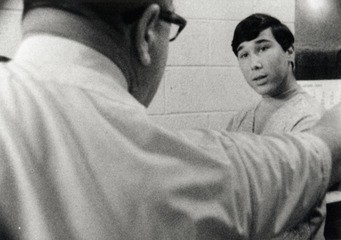 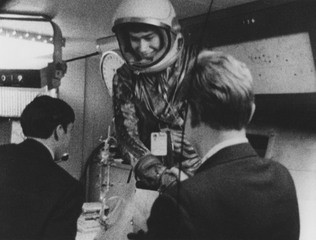 The same holds true for High School. The non-narrative film is crammed with universal images and late-'60s-specific details. A grumpy hall monitor (aren't they all?) patrols the cinderblock-walled, linoleum-floored passageways with the grim determination of an MP at Checkpoint Charlie. Boys and girls, segregated, watch old 16mm sex education films about gonorrhea and listen to much unsubstantiated sermonizing about how pre-marital sex will lead to total destruction. Girls in frumpy gym uniforms unenthusiastically dance to "Simple Simon Says," while students with glazed-over eyes listen to joyless teachers teaching French, Spanish, typing, and English literature (well, "Casey at the Bat" anyway). We're never privy to students talking among themselves; during most of the 75-minute film teachers and advisers yammer on as the students they're talking to sit or stand without saying a word.

The major exceptions comes early, when a surprisingly articulate young man quite reasonably protests his detention to a teacher/administrator (his home room teacher? the assistant principal? Wiseman doesn't identify him or anyone else), insisting he did absolutely nothing wrong. Being right or wrong isn't important, the young man is told; what's important is that by accepting detention you demonstrate that you're someone who can take orders.

In another room, a young Up the Down Staircase-type English teacher in her twenties tries to motivate and relate to her students with Paul Simon's "poetry," heard in a reel-to-reel tape recording of "Dangling Conversation." Painfully, the defeated students can muster no more interest for this woman's class than anyone else's.

Audiences in 1968, particularly ones expecting a cheery, care-free environment fresh from the pages of Archie Comics were probably shocked and appalled - but I wonder what an audience of adults would make of High School today, when many high schoolers of all races and financial strata dress like gangsta rappers and $20 whores, with iPods attached to their bodies like umbilical chords and cellphones fused to their palms, where 10th graders hop in their SUVs at lunchtime to dash off to the nearest 7-11 to gossip. American high schools today at least seem to be far more permissive than they were even in the late-1970s and early-'80s, by which time the '50s military school model of Wiseman's film had pretty much evaporated.

Clearly this banal, one-size-fits-all approach to education is horrible, but then again no alternative is offered. Wiseman's High School is more like a way station between child- and adulthood, where teachers suppress all independent thinking and ambition, just in case it's the wrong kind. A 2003 study by UNICEF placed the United States 18th out of 24 countries in a ranking of educational effectiveness. The methods may have changed, but the end results, if anything, continue to plummet. At 18 I probably would have rejected everything about the methods at Northeast High outright; at 42, with a seven-month-old daughter, and living in another country partly because of the superior educational opportunities it offers her, I'm not so sure a little formality and regimentation is such a bad thing after all.

Selected in 1991 for the prestigious National Film Registry, High School fascinates as a document of its time. Former students back from Vietnam visit teachers with news on wounded alumni. Near the end, in what appears to be a little oasis of genuine excitement and learning, three students emerge from a (shockingly good) Apollo-type flight simulation. Emerging from a video-monitored "capsule" after 193 hours, the jubilant students are read a telegram from Mercury Astronaut Gordon Cooper, who had the Right Stuff.

As with Law and Order, High School is presented in its original full-frame format, in an all-region DVD-R made by Wiseman's own distribution company, Zipporah Films, from whom the DVD can be ordered directly. Filmed in 16mm and black and white, the image isn't flawless but superior to Law and Order and for the most part in fine shape, as is the mono audio. There are no subtitle options and no Extra Features.

Another must-see, High School is a landmark documentary, an influential work of direct cinema/cinema verite, though Wiseman dislikes both terms. It's the kind of film that transports you to a time and place and lingers long enough so that you leave it with the feeling of having experienced it. A DVD Talk Collectors Series title.