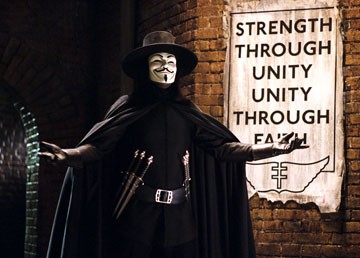 "Voilà! In view, a humble vaudevillian veteran, cast vicariously as both victim and villain by the vicissitudes of Fate. This visage, no mere veneer of vanity, is a vestige of the vox populi, now vacant, vanished. However, this valorous visitation of a by-gone vexation, stands vivified and has vowed to vanquish these venal and virulent vermin van-guarding vice and vouchsafing the violently vicious and voracious violation of volition. The only verdict is vengeance; a vendetta, held as a votive, not in vain, for the value and veracity of such shall one day vindicate the vigilant and the virtuous. Verily, this vichyssoise of verbiage veers most verbose, so let me simply add that it's my very good honor to meet you and you may call me V."

Alan Moore is perhaps the most celebrated writer in all of comic book-dom. He brought new life to the then-stodgy DC comics line with his hauntingly human vision of Swamp Thing. He then took all of comics to a new level with his more relevant than ever Watchmen mini series, considered by many to be the greatest comic ever printed. So for a guy at the forefront of all that is great in a storytelling medium, why is it that so many of the movies based on his work sucks? There was Wes Craven's mediocre attempt at doing justice to Swamp Thing, and the infamous League of Extraordinary Gentlemen, which prompted a frustrated Sean Connery to retire from acting. Moore didn't help matters, by decrying any licensing of his work the moment it was announced, and refusing to offer his assistance, which has worked so well for contemporary Frank Miller. It seemed that every Moore adaptation was doomed to failure.

Things didn't look much better when the Wachowskis, coming off of the horrendous disappointment that was the two Matrix sequels, announced they would be writing the movie version of V For Vendetta, one of Moore's most controversial and outspoken pieces. When James McTeigue, the Wachowskis' second unit director, was announced to helm the project, it seemed like this was going to be nothing but a time waster for the filmmakers. Imagine my surprise (and probably everyone else's) when the finished product turned out not just to be good, but was actually great. 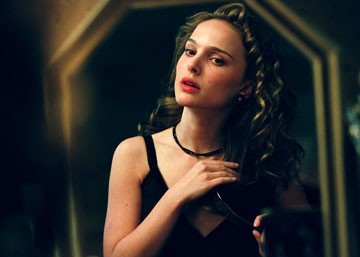 Evey Hammond (Natalie Portman) lives in a world very different from our own. The United States is in shambles, torn apart by famine and civil war. The rest of the world isn't faring much better. In this world of chaos, one country has been able to maintain order. Great Britain. But it has done so only because a tyrannical religious dictator, Chancellor Sutler (John Hurt), has the region in an iron grip. Thus Evey is assaulted one night by a group of secret police, only to be saved by a mysterious yet verbose masked terrorist who identifies himself only as "V" (voiced by Hugo Weaving). V begins to shake the malaise of the general public, while also systematically assassinating many high ranking members of government. Evey is caught up in the middle, torn between her love of V and her fear of the government.

V For Vendetta was originally written by Moore as a reaction to the voraciously conservative Margaret Thatcher government in Britain. Resurrecting it in 2005, while America was embroiled in a foreign war, led by a religious and conservative president who was proving to be very divisive with the American public, was a brilliant move. In V's world, Britain is very well kept, maintained, and technologically advanced, but at the expense of many personal freedoms, including freedom of speech and thought. In many ways, the picture is more Brave New World than 1984. 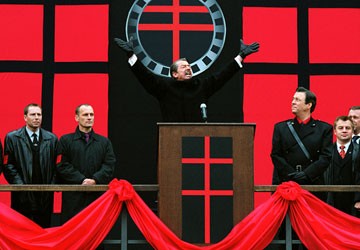 If it weren't for Sutler, that is. Sutler is the definition of Big Brother, appearing almost entirely through a giant TV screen, and backed by an army of spies and troops. John Hurt plays Sutler with an acerbic bite. He's gained power through deceit and death, and now he's paranoid that someone will take him out the way he took out his predecessors. V is his inadvertent creation: a monster with a soul. In the comic, V was much more of an outright anarchist, puncturing a society without freedoms by juxtaposing it with a society with no rules. The V in the film seems to be more classically democratic, stating, "People shouldn't be afraid of their governments. Governments should be afraid of their people," echoing in a way the words of Locke's social contract. Hugo Weaving hits all the right notes, giving V the perfect combination of levity and gravitas.

The real anchor of the film is Evey. The audience empathizes with her. She reflects their hopes and fears, and acts as their mirror. Natalie Portman gives a fearless performance, digging in to Evey's depths and allowing her head to be shaved on camera. She has great chemistry with V, despite his face always being masked. The character is more headstrong and independent than her comic book counterpart, to the betterment of the film. She's aided on the supporting cast by Stephen Fry and Stephen Rea, both filling in their niches nicely. 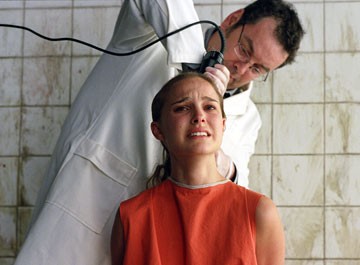 And James McTeigue? He keeps an able hand on the proceedings, directing the action with style and a little flair. He's not at the level of the Wachowskis' at their best, and the climactic action sequence feels a little like a low-tech version of bullet time, but for the most part, he stays true to the material. Changes were made from the original comic, the most infamous being the ending. Moore's original ending is more direct, with a better defined role for Evey. The film's ending is a little more vague, although in some ways feels like it wraps things up more neatly. While it may remain a bone of contention with some of the comic's more ardent fans, I think it works well, and is a fitting way to send off the best adaptation of Alan Moore's work to date. 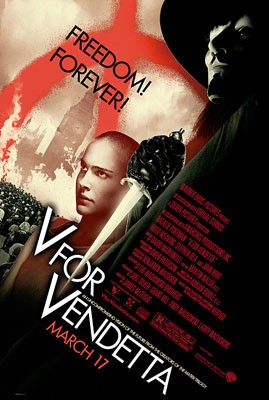 Warner Bros. released V For Vendetta on HD DVD over a year before releasing it on Blu-ray. Part of the reason was due to an interactive bonus feature that Blu-ray was not capable of at the time of the disc's release. Now WB is going back and releasing those HD DVD exclusives.

The Image:
Warner Bros. re-uses the same 2.39:1 VC-1 compressed 1080p transfer that was found on the HD DVD. Even in the year and a half since the original release, the disc still looks very impressive, with a high degree of depth and dimensionality. McTeigue employs a few digital tricks to alter the look of the film, generally in subtle ways, but enough that it does take away some of the sheen from the image. Still, that's how it was intended, and it still looks damn good.

The Audio:
Warner Bros. also uses the same lossless Dolby True HD 5.1 audio mix found on the HD DVD. V For Vendetta received one of the first lossless audio mixes and while it still sounds good on the whole, a slew of new mixes somewhat diminishes the effectiveness of this one. On the plus side, a dialogue balance issue found on the standard DVD has been corrected, and when compared to the Dolby Digital mix, the range and fidelity are much improved. I still found that while the dialogue is no longer buried by the effects, I found myself reaching for the volume control whenever the film switched from conversation to action and vice versa. And having heard some unbelievably immersing mixes since October of 2006, I find that V For Vendetta stands as a little distant. 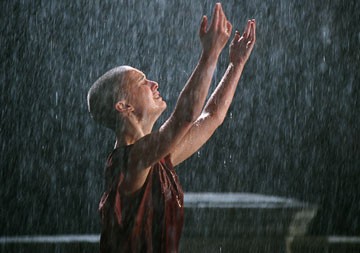 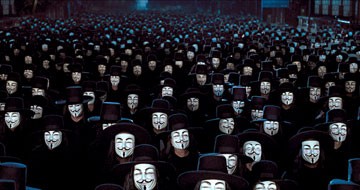 The Conclusion:
V For Vendetta is a strong and thought-provoking film that finally manages to begin to do Alan Moore's comic work justice on film. Natalie Portman and Hugo Weaving are a spellbinding duo, and first-time director James McTeigue shows he's more than capable of standing on his own two feet. While this Blu-ray offers no improvements over the previously released HD DVD, it also isn't inferior in any way. Due to it being an exact replica, I wouldn't say this is worth an upgrade for those who have the HD DVD, but certainly worth it for those who haven't picked it up in high def yet. Highly Recommended.

Note: The images in this review do not represent the image quality on the Blu-ray.