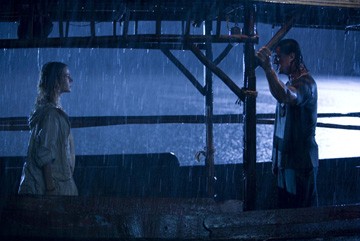 Sylvester Stallone's fortunes were looking decidedly down when he embarked upon a sixth Rocky picture. I remember the derision being heaped upon him as people considered the film to be the last cash in on his chips. After all, he hadn't made a movie worth seeing since arguably Copland in 1997, and even that wasn't a big hit. But then Sly proved everyone wrong by releasing a warm, touching, and uplifting film that recalled his glory days without ever losing sight of the man he was now. It was an inspirational effort and proved that Stallone had some creative juices left in him. Then came rumblings of a revival for his other trademark character, John Rambo. This time, the critics weren't so harsh, especially when it was revealed that Stallone would be directing, as he did on Rocky Balboa. But then, Rambo's adventures had become far more cartoonish and outlandish than Rocky's ever did, and the character was more of a joke in popular culture than anything else. Could Stallone capture lightning in a bottle twice?

It's been almost twenty years since John Rambo saved Colonel Trautman from Russian forces in Afghanistan, and in that time, he's moved across Southeast Asia, doing odd jobs. At the start of the film, Rambo is approached by a group of missionaries looking to charter his boat to help refugees in war-torn Burma. Rambo refuses, annoyed at the group's insistence that bringing in medical supplies and bibles will change anything in that part of the world. But he's persuaded by Sarah (Julie Benz), and against his better judgement, takes the group upriver. It's not long before the town they're aiding is attacked by the Burmese military, and the missionaries are taken hostage. When Rambo hears of the abduction, he takes a team of mercenaries into the jungle, prepared to do whatever it takes to save Sarah, even if it means losing his own life. 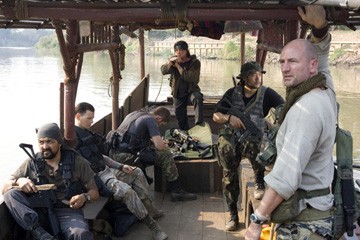 Rambo is proof that Sylvester Stallone, who has a had a hand in many of the screenplays for his films, has fully regained the storytelling powers he rediscovered on Rocky Balboa. Gone are the outrageous "one man war" antics of Rambo II and III. Instead, Stallone takes the series back to its roots. In Rambo III, Rambo had pretty much found peace with Buddhist monks. In Rambo, he's torn up inside again. The actions of his life have driven him away from everyone he's ever known or loved, and left him isolated and disconnected from the rest of humanity. Stallone plays the character stoically, building up reserves of energy to be unleashed upon those stupid enough to get in his way. It's a refreshing take on a character that had grown stale.

As a director, Stallone once again proves his mettle. Where Rocky Balboa was contemplative and mature, Rambo is unsettled. The camera is always subtly roving, keeping the audience on shaky ground. And the man knows how to ratchet up tension. There are several key sequences in the film which are absolutely spellbinding. But the real power is in the moments before the action begins, when the audience is holding their breath and you can hear a pin drop. The editing in those sequences is particularly strong. 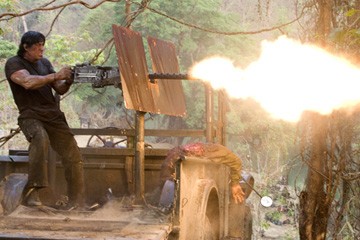 But, of course, you're not going to watch a Rambo movie for the editing. You're there for the action. And this one delivers in spades. As high as the body counts were in the previous pictures, they're nothing compared to the symphony of death Stallone offers us in this film. In the special features, he said he wanted to portray the events in Burma as realistically as possible, which means we see graphic depictions of children being brutally murdered, men being maimed and killed, women being raped, and so on. For gore hounds, there's plenty of great stuff here, but it's not gratuitous. Stallone really wanted to bring attention to the situation in Burma, which gives the film a sense of purpose, something the previous two lacked.

Rambo II attempted to offer redemption to John Rambo by letting him indulge in his most violent tendencies, but in the service of saving Vietnamise prisoners of war. It was a hollow attempt, but Rambo gets it right. Here, the redemption comes from a true character arc, with Rambo going from tortured soul to a man who's willing to look past his own pain. It's a stunner of a comeback that can stand proudly next to First Blood, the only other film in the series to have such a deep emotional backdrop, while at the same time containing action that outdoes Rambo II and Rambo III. Turns out old Sly is still going strong. 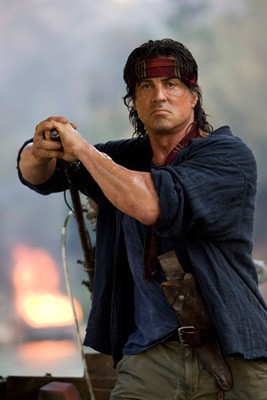 The Image:
Lionsgate presents Rambo in its original aspect ratio of 2.35:1 in this AVC-encoded 1080p transfer. Stylistically, Rambo is a gritty film, with blown out daytimes and dark, dark nights. It looks like the film went through some heavy digital processing, as fine detail is cut down at times. However, some of the daytime scenes on the river look nice and sharp, with the light reflecting the water beautifully. My biggest problem with the transfer is that the blacks almost universally are a muddy dark blue, which stood out to me, as I don't remember it being that way in the theaters. There's no blemishes on the print or compression artifacts, but I wasn't entirely impressed with the image here.

The Audio:
Lionsgate offers up a lossless DTS-HD Master Audio 7.1 track. The audio is at its best during the action sequences, which offer up an engaging and fully active track. The LFE will shake your seat when Rambo starts firing off those 50 caliber rounds, and the surrounds get a ton of use. I was a little surprised that the quieter scenes have much less surround activity than I expected, given that most of the film does take place in a jungle. Still, when this mix picks up, it really comes alive. 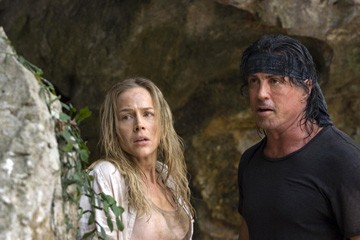 The Supplements:
Lionsgate offers all the features from the two-disc DVD edition, plus more. All features are in high definition, except where noted. 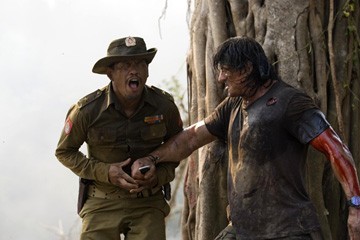 Note: The images in this review do not represent the image quality of the Blu-ray disc.