Kino has started to release some restored silent films on DVD that were previously available on VHS tape, including their First Ladies:  Early Women Filmmakers series.  Featuring rarely seen movies created by women, these three DVDs have some interesting films and are quite a bargain, retailing for just half of what their VHS counterparts sold for.  This disc contains two short features, The Ocean Waif, directed by Alice Guy-Blanche, the first woman to direct movies, and 49-17 with Ruth Ann Baldwin at the helm, a fun parody of westerns.

The Ocean Waif (1916):  Millie Jessup (Doris Kenyon) is a young girl living as a slave to her mean step-father.  He found her on the shore as an infant and raised her ever since, but he's never treated her kindly.  One day he starts to beat her over a small mistake when a local boy, Sem (Fraunie Fraunholz), rushes in and saves her.  Millie runs off and takes up living in an abandoned house, which is rumored to be haunted and in immaculate condition. 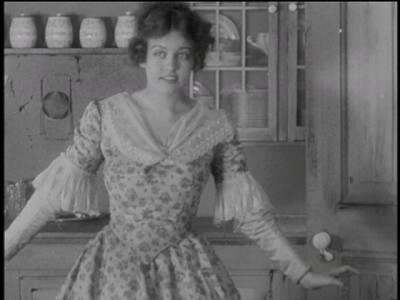 A famous novelist, Ronald Roberts (Carlyle Blackwell), needs peace and quiet to work on his next book, and takes up residence in the town where Millie lives.  Not finding the local hotel to his liking, Roberts and his valet Hawkins (Edgar Norton) decide to move into the same abandoned house that Millie is squatting in.  Eventually they meet and Millie falls for the young author.  When his fiancée arrives from New York however, Millie realizes that they come from different background and can never be together.

This is a fairly typical melodrama for the time and while it was worth sitting through, wasn't exceptional.  Made for The International Film Service, owned by W. R. Hearst, the story was mostly predictable and the action wasn't very dramatic but there were some nice touches.  The scene where the writer is reading his newest book to his man-servant was funny, and Doris Kenyon was lovely her scenes. 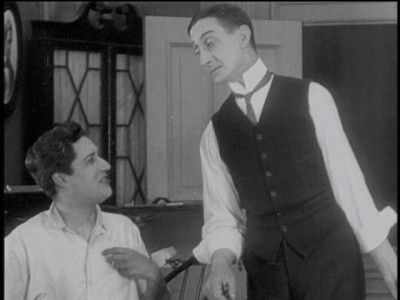 There were some odd moments in the film, and whether it was because scenes are lost, studio directed cuts at the last minute, or just unusual directing I can't be sure.  One such moment comes near the end, when a main character is written out in a dramatic way with just a title card.  The scene where the writer finds the Waif in the field and kisses her was awkward because there wasn't any set up.  The previous scenes had both people somewhere else, and the writer had shown no interest in Millie before that kiss.  This made the film feel a bit abrupt, unpolished, and improvised.  That doesn't mean the film played that way during its original release, but it does in this edit.

It's 1917 and Judge J.R. Brand (Joseph Girard) is a successful, and very rich, adjudicator in the East, but he was raised in the old West and misses his adventuresome youth as a '49'er.  He wants to recapture the times of his youth, and so he sends his secretary, Tom (Leo Pierson) to buy up the old abandoned town of Nugget Notch and find some cowboys to populate it.  That was the town that Brand and his partner were living near when they struck it rich. 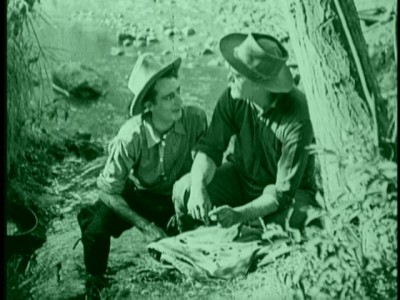 Tom travels west and finds it hard to locate anyone willing to uproot themselves and move to a ghost town.  Then he happens across a '49'er sideshow attraction at the San Diego World's Fair that wasn't doing too well.  He hires the whole cast to move into Nugget Notch and they're more than happy to do so.  When the Judge arrives to the town of his youth he's very pleased.  Until one of the cast decides to take all of the Judges money that is, along with the attractive Peggy Bobbett (Donna Drew).

This first western ever directed by a woman is a lot of fun.  It's not meant to be taken seriously, and the film knows it.   When Judge Brand arrives in town, for example, he admonishes the new locals for being to civil.  "You're a fine, tame bunch of Westerners, you are!  How long would a plug hat have lasted in the old days?"  With that he takes off his hat, throws it in the air and shoots it.  Then he starts taking shots at the people standing around!  What fun! 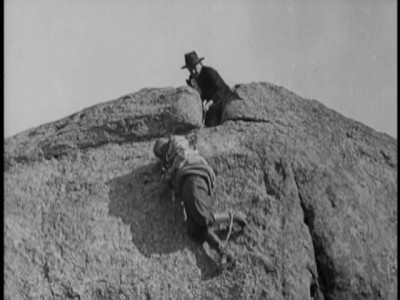 Another thing that was enjoyable about this movie was the twist one of the sub-plots had.  Right from the beginning viewers will be sure of someone's fate, but near the end it takes a 90 degree turn unexpectedly.  It isn't often that light dramas such as this one have plot twists. Yeah, there are some problems with the film.  The time doesn't work out at all.  (If Brand was 25 years old in 1849 he would be 93 in 1917.  That's not to mention that the daughter of his partner would have been 68 year old.)  When all is said and done though, this is a light and enjoyable film that has some nice twists.

Both films include solo piano scores composed and preformed by Jon Mirsalis.  Mr. Mirsalis does a great job with the music, making the audio both entertaining and having it accentuate the on-screen action.  Being a recent recording there are no audio defects of note.  Both of these films have nice sounding soundtracks.

The Ocean Waif:  This film has been restored from the only existing print, and it was saved just in time.  The film has started to decompose in places, and some scenes are nearly totally gone.  Luckily it is only a handful of sequences, mostly at the beginning.  The parts of the film not ravaged by decomposition look pretty good however.  The full frame image, tinted according to the director's written instructions, has fine contrast and a good level of detail.  It's just too bad that an otherwise fine film has started to decompose.

49-17:  The image is a bit jittery in places, but only marginally so.  The full frame picture is tinted and has a good amount of contrast and detail, though it is fairly soft.  While there is some print damage (scratches and dirt mainly) including several missing frames, the overall appearance is very good.

Unfortunately there are no extras at all.

I had a lot of fun with 49-17.  It was a light and amusing drama/western that had a few plot holes but was so enjoyable it was easy to overlook them.  Not so much with The Ocean Waif.  Though it is a fine film, there are a few plot points that happen too abruptly or aren't shown on screen at all.  Some of the ending feels like an after thought rather than a carefully crafted story.  Even so both film are worth watching.  Recommended, especially for the second feature.