In America, animated films are thought to be nothing more than children's fare.  Even though such films a American Pop and Fritz the Cat had theatrical releases and were anything but aimed at kids, animated adult films have never really caught on in North America (just as comics aimed at adults are sadly a niche item.)  That's a shame, because there is a lot that can be done with animation and it can tell a story in a different way that isn't possible with live actors.  Case in point, 2007's Academy Award nominated film Persepolis.  This unique and powerful story of a girl growing up in turbulent times has just arrived on Blu-ray with a stunning transfer and an excellent sound track.  One of the most impressive films of 2007, this is a 'must-buy'.

Based on the autobiographical graphic novels by Marjane Satrapi (who co-directed the film along with French artist Vincent Paronnaud,) this film tells the story of a young girl growing up in Iran during the 70's and 80's.  As the film starts in 1978, the Shah is still in power, but not for long.  With protests in the streets that often end in violence, Marjane is surprised when she finds out that the things she has learned in school, that the Shah was appointed by God and is a great aren't necessarily true.   Her father tells her that her uncle has been in prison for nine years for speaking out against the Shah, and she's even more astounded to discover that her grandfather was a Prince in the regime that was overthrown by the Shah's father. 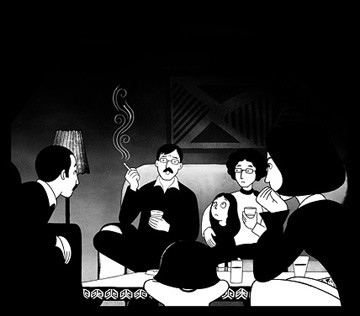 Marjane is ecstatic when the revolution comes.  Her uncle is freed from prison and the country in filled with possibilities for a new and better society.  The first national elections sweep fundamentalists into power, but the uncle, who has a doctorate in Marxist philosophy from the University of Moscow, tells the young girl not to worry.  There are always several governments formed after a revolution, as was the case in both the US and Russia, and that things will get better.  He keeps repeating that mantra up until the time the new government comes to arrest him.

When Iraq attacks their neighbor, the fundamentalist Iranian government uses that as an excuse to arrest and execute anyone who doesn't agree with them.  Young boys are told in the state-run schools that if they die in battle, they'll be martyrs and gain instant access to heaven.   With freedoms curtailed and daily bombings, Marjane is sent to Europe to stay with a friend of her mother's.

That doesn't work out well for the growing girl.  Two days after arriving, the 'friend' drops Marjane off at a school for girls run by nuns, where the girl is belittled for her nationality and her trouble with the local language and eventually runs off to live with friends, then the friends of friends, and finally ends up on the streets.  Returning to Iran, she finds herself thrust into an ever more tyrannical society that is no longer governed by the rule of law. 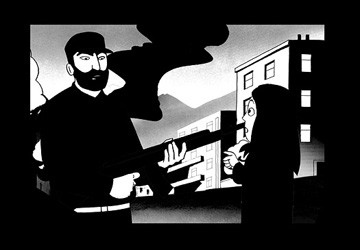 This film would not be nearly as impressive or powerful if it had been filmed with live actors as it is as an animated feature.  If it were live-action the story would be about Iran and the troubles the country has gone through.  But that's not really what is at the heart of this story. This film is about freedom, alienation, and the dangers of intolerance.  It's also a universal story of the dangers of fanaticism with the point not being that this happened in Iran, but that it could happen anywhere.

Most of Marjane's problems through the film come about because she doesn't really fit in anyplace that she lives.  In Iran before the war she's an oblivious kid, but as she grows older she's threatened with arrest for her taste in music and clothes.  When she arrives in Austria she feels even more isolated by not only the language, but by her appearance and customs.  Returning to Iran after years in the West, she fits in even less than she did before leaving.  One telling scene has two of her friends questioning her about her relations with men after her return. Giggling and with too much makeup on, they want to know if she's actually had sex.  They're happily scandalized when she admits that she has, but totally shocked when they ask if it's all it's supposed to be and Marjane say "it depends on the guy".

One of the great aspects of this movie is that it's not political in nature and avoids the politics of the day.  Sure, they talk about the Shah and the regime that replaces him, and at one point Marjane stands up in class and tells her teacher that her Communist uncle was imprisoned for nine years under the Shah, but it was the present government that killed him, but they never address the question of which is the lesser evil, or what the Iranian people should do.  Instead it shows the events of the day from one person's perspective and lets the viewers draw parallels (which is easy to do) to events in their own past and present.  Marjane's love for her country and people come through strongly, and though she dislikes the present government her feelings for Iran and her family are positive. 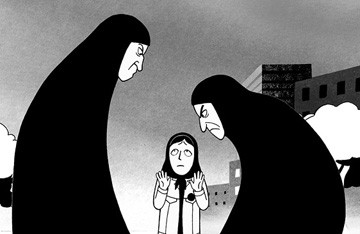 George Carlin has a joke where he says if we lined everyone in the world up and everyone had to walk down the line and meet everyone else, wars would be a thing of the past.  After all, how can you go to war against someone you've meet and know.  That's what this movie does, in a small way.  It shows life in a different culture at a personal level.  As viewers get to know Marjane and her family, they start to connect with them and worry about them.  When some of her friends and associates are killed or maimed, it puts a human face on the tragedy.

This film has some hilarious moments as well as some tear-jerking ones, but overall it is a powerful and even inspirational coming of age story that is quite different from the norm.

The 1.78:1 1080p/AVC encoded image looked fantastic.  Most of the film is in black and white, which is more forgiving of video errors than color, but the frames are filled with textured speckling that comes across strongly with a very fine level of detail.  The lines of the characters are sharp and the blacks are solid and inky.  The varieties of grays are also nicely shaded and large patches of one color are even without mottling or noise.  Whites did not bloom at all.

On the digital side of things the disc also performs well.  There were no compression artifacts or digital noise and the whole presentation looks wonderful.

This disc comes with the original French audio track or an Englsih dub, both in Dolby TrueHD 5.1.  The French track features Catherine Deneuve as Marjane's mother, so that's the track I used to screen the film, though I spot checked the English dub as well.  Both tracks sounded very good.  They were clean and clear with a full dynamic range and no hint of common audio defects.  The mix was a bit front heavy, which is understandable since the movie is mainly dialog based, but the full soundstage was used quite effectively.  During the war scenes the rumbling of tanks seemed to come from all corners of the room and the subwoofer gets a good workout.  The party sequences also really bring the film to life, with glasses clinking and ambient noise surrounding the viewer.  Likewise the quite sections feature dead silence with clear voices.  All in all this is a great sounding disc.

This disc ports over all of the extras that are on the DVD, though they are presented in SD.  First off is The Hidden Side of Persepolis, a half-hour look at the making of the movie presented in the original French with English subtitles.  They created this film with standard paper-and-pencil animation that hadn't been done for 20 years in France previous to this production.   Marjane Satrapi is featured prominently in this featurette, and discusses how she and her co-director met, takes viewers through the animation and dubbing process, and ends up with a humorous look at the "Eye of the Tiger" sequence in the film.  Though it will be a bit more interesting for viewers who aren't aware of how a traditionally animated film is created, this was well worth watching.

I wish the same could be said of Behind the Scenes of Persepolis, an 8-minute EPK that's pretty dull.  It looks at the creation of the English dub and has comments from voice actors Gena Rowlands and Iggy Pop.

More interesting was the half hour long 2007 Cannes Film Festival Q & A session.  Here Satrapi, the producers and French actors field a lot of questions, and not all of them are softballs.   Satrapi is asked why she won't be interviewed by Iranian journalists for example (though she claims she is willing to.)  The one thing that I found amazing is that none of the questions were posed to Catherine Deneuve!  She was sitting right next to Satrapi and never opened her mouth.  Oh well.

Next up are four animated scene comparisons which show rough sketches for some scenes that didn't make it into the film and some of the final work.  This was interesting, though I agree with the deletions.

Finally there are three scenes accompanied by commentaries.   Most of the information in these was mentioned elsewhere, but it's worth taking the six or so minutes that this runs to watch them.

This disc is also Blu-ray Live enabled, though when I accessed these internet based features all that was to be found were trailers to upcoming DVDs and some promotional text pieces.  As of this writing however the Blu-ray disc is not available for purchase, so more content may be available after the street date.

An excellent film, this look at the Iranian revolution and following wa r through the eyes of a young girl is more than just a docu-drama.  It's a thoroughly engrossing look at alienation and freedom, and well worth picking up.  The Blu-ray disc looks fabulous with excellent visuals and terrific audio.  This disc easily earns a highly recommended rating.