Zipporah Films // Unrated // Region 0
List Price: $39.95 [Buy now and save at Zipporah]
Review by Chris Neilson | posted July 1, 2008 | E-mail the Author
Filmmaker Frederick Wiseman has completed three dozen documentaries to date, several exceeding three hours in length. Most of Wiseman's films are so much of a kind that it could be said he has for four decades been making one very long movie in installments. That movie is the story of contemporary America as told through its public and private institutions. Through roughly six dozen hours of screen time, Wiseman has documented hospitals, an institute for the criminally insane, public housing, welfare, domestic violence social services, public high school education, law enforcement, juvenile courts, a state legislature, institutes for the blind and deaf, New York City's Central Park, a zoo, a university primate center, a ballet company, the then American-controlled Panama Canal, soldiers and airmen in training, a monastery, an upscale department store, a racetrack, a slaughter house, and, the modeling industry.

Wiseman has twice pulled the focus back to explore how these American institutions interact at the community level. The first of these community-level documentaries, Aspen, aired on PBS in 1991; the most recent, Belfast, Maine aired in 2000.

Like nearly all of Wiseman's films, Belfast, Maine was financed by the Corporation for Public Broadcasting, and was originally aired on PBS in its entirety, without interruption. There is neither a score, nor commentary, nor interviews, nor archival footage. The participants do not directly address the camera, nor does Wiseman otherwise attempt to influence events at the time of filming. This is not to say that Belfast, Maine is an attempt to capture unmediated reality. That's never been Wiseman's aim. In choosing what to film and how to edit it, he shapes reality to suit his prerogatives, just as nearly all documentarians inevitably do. 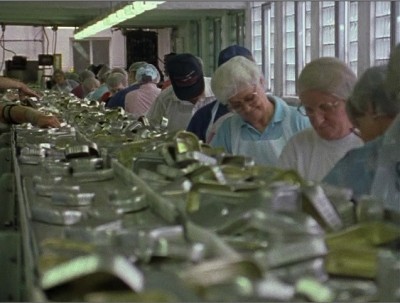 The population of Belfast is more blue collar and significantly older than the American population as a whole. These demographic characteristics are privileged in Wiseman's work which, for example, spends more than an hour of screen time documenting blue collar labor in factories and aboard commercial fishing and tug boats, but less than five minutes at the corporate campus of MBNA, Belfast's then largest employer. Similarly, the provision of senior services appears repeatedly throughout the 248-minute documentary, but school-age children are underrepresented.

Wiseman shows little interest in private life. Though there are occasional scenes of individuals engaged in hunting and trapping alone, there are no interiors of private homes unless they're being visited by a health or social worker, and the only blue flicker of a television screen to be found is a reflection in the eyeglasses of a bedridden senior. Belfast, Maine is not an attempt to detail how life is commonly lived, but rather a meditation on some elements of life for some people, largely as mediated immediately by their interactions with and through social institutions, and indirectly through Wiseman's filming and editing.

From the languidly-paced opening scene of lobstermen at work onward, it's clear that the pacing of Belfast, Maine is different than that to which most contemporary viewers are accustomed. Though Wiseman employs tight editing with few shots lasting more than a handful of seconds, he allows each scene to unhurriedly unfold. Additionally, there's no through story, and nothing builds. Each scene stands alone, and could easily be viewed in any order, and over any length of time, though this would be a very different experience from watching this film in a single viewing as Wiseman intended. Some viewers will no doubt find this makes for difficult or even boring viewing, and will rebel at the long runtime and lack of narrative development, but those viewers that can accept this demanding approach will be richly rewarded. 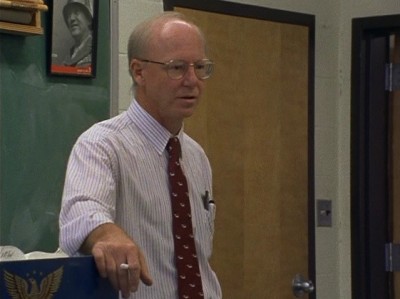 Though Belfast, Maine presents a cumulatively-rich, albeit circumscribed, examination of the community of Belfast, many of the scenes are truly exceptional in their own right. The many extraordinary vignettes include a thoughtful lecture provided by a high school teacher on Moby Dick which identifies Captain Ahab as the first working-class tragic figure in western literature; the repetitive and likely mind-numbing toil of workers in a mackerel cannery; a community theater rehearsal for Arthur Miller's Death of a Salesman; and, an informal counseling session provided atop a rusted-out Ford by a community social worker to a young, single mother dealing with her own issues of childhood sexual abuse by her father. 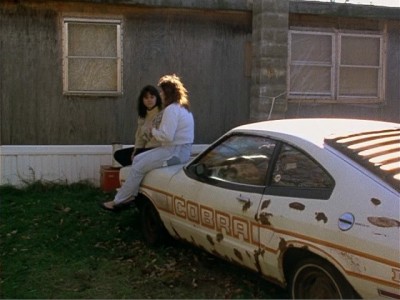 The DVD
Belfast, Maine is available for purchase directly from Wiseman's film distribution company Zipporah Films. Belfast, Maine is burned onto three DVD-Rs, but comes in a standard-sized alpha case with laser-print artwork. There are chapter stops but no scene selection menus. 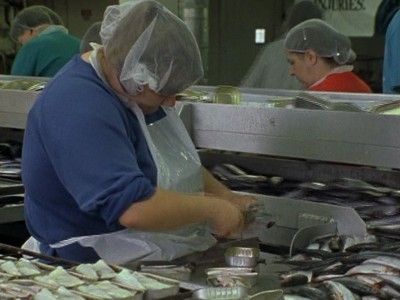 Belfast, Maine is shown in its original aspect ratio of 1.33:1. Colors are muted and the image is grainy though this may well be how it originally looked. There is mild digital combing, and occasional scratches on the print, but these blemishes don't diminish the overall power of this documentary.

The Audio:
The 2.0 audio track has some separation between channels, and sounds acceptable with no noticeable dropouts or distortion.

There are no subtitles offered on this release.

Final Thoughts:
Belfast, Maine is a worthy addition to Frederick Wiseman's continuing examination of contemporary America as told through its public and private institutions. Fans of his other work will find much to like here, though the uninitiated may wish to start with a shorter and more focused film as Belfast, Maine's languid pacing, long runtime, and lack of traditional narrative development will be disconcerting to some viewers.

Much of the power of Belfast, Maine is in its cumulative impact, and the experience of watching the 248-minute film without interruption is quite different from that of watching the film in small doses. Belfast, Maine, requires a serious commitment of time, but the rewards available to dedicated viewers make this a highly recommended pick.