A sixteen-year old girl is the focus of attention in Finnish director Kirsi Liimatainen's Sonja (2006). Honest, devoid of moralistic preaching, and above all superbly acted pic tells a story about one's girl's desire to remain true to her feelings.

Sonja (Sabrina Kruschwitz) loves to spend time with her best friend Julia (Julia Kaufmann). They talk about relationships, vogue, and poetry. Julia also likes to talk about boys. But Sonja doesn't. Sonja likes Julia and the more she spends time with her the more she begins to miss her when her friend isn't around. Is this what love is supposed to feel like?

After a weekend in the countryside and a disappointing sexual encounter with an older man Sonja returns home determined to reveal her feelings to Julia. But Julia has moved on and found a new boyfriend.

If you've seen Lukas Moodysson's Fucking Åmål (1998) then you probably know that making a film about a teenage girl falling in love with another teenage girl isn't the easiest of subjects to sell. Just ask film distributors. And I mean US film distributors - changing the provocative title (Show Me Love is the sanitized version we ended up getting), "polishing" the dialog, and keeping it off mainstream theaters is what Strand Releasing had to do in order to have one of the most successful Swedish films from recent years "acceptable" for the US.

And here we are ten years later. The US has seen Pawel Pawlikowski's My Summer of Love (2004), Antony Cordier's Cold Showers (2005), and Céline Sciamma's Water Lilies (2007) is just around the corner. Things are changing. Not as quickly as some may wish but at least film distribs are slowly bringing to the US great films that only a few years ago would have been impossible to see. 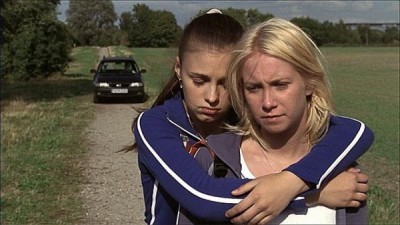 What about Sonja? Where does this German film rank thematically next to the few mentioned above? The quick answer would be - very close to Fucking Åmål. This is a beautifully told story about one girl's gradual realization that what those around her perceive as normal is something she would have to struggle with.

While Sonja does have a few similarities with Fucking Åmål however it also has style and substance of its own. Furthermore the film works incredibly well because of its ability to remain as honest about its topic as possible avoiding dangerous cliches and profiling. There isn't any oiverdramatization or sugarcoating here. From the moment Sonja begins to understand her feelings for Julia the audience is walked into a world where every single step the young girl makes is the "wrong" one. Not because she isn't capable of expressing her feelings, she certainly is, but because everyone close to her expects that she acts and reacts in a certain way, the normal way. And how Kirsi Liimatainen and team have captured Sonja's brittle psyche in light of those expectations is the reason why Sonja does not disappoint.

Technically however Sonja is closer to My Summer of Love than it is to Fucking Åmål. The pacing is slow, at times even protracted, and very much in sync with the main protagonist's measured succumbing to loneliness. The camera adequately spends a great deal of time examining Sonja's face, often remaining static, as if to capture as much as possible from the polarized emotions raging in the young girl's soul.

Presented in an aspect ratio of 1.78:1 and enhanced for widescreen TVs the transfer for this R1 disc looks good, at times even solid - colors are convincing, detail above average, and edge enhancement not an issue of concern (I did notice its presence during some of the beach scenes so obviously some viewers will share my experience). The transfer is also progressive though during the first half of the film on two occasions I noticed an effect very close to what we would typically refer as "combing". I did not notice its presence during the second half of Sonja however and to be honest this isn't something that would affect your viewing experience dramatically.

Presented with a German 5.1 and 2.0 tracks Sonja sounds solid. The dialog is incredibly crisp and clear, very easy to follow. The music comes off the speakers well balanced with the actors' speech and I did not detect any disturbing hissing, pop-ups, or cracks. All in all I am confident that you will be very satisfied with the audio treatment on this R1 disc.

Aside from a photo gallery, trailers for other studio releases, and a trailer for the main feature there is nothing else to be found on this disc.

I enjoyed this film a great deal. It is simple, honest, and tackling a difficult subject most film directors would have ended up either sugarcoating or spicing up for the highly demanding MTV audience. Kirsi Liimatainen went the opposite direction and kept everything pop out of Sonja.