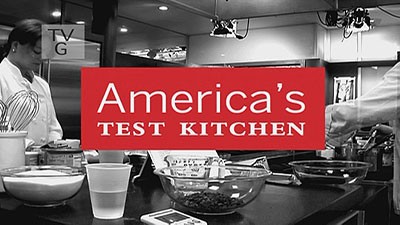 
The Show
I'm a big fan of Food Network, particularly shows like "Good Eats," "Iron Chef" and "Unwrapped." I'm just not a big fan of straight-up cooking shows, with a chef behind a counter, whipping up a couple of recipes, ingredient by ingredient. As such, I don't watch any PBS cooking shows (with the exception of Ming Tsai.) So, despite my wife being something of a PBS cooking show addict, I've never watched an episode of "America's Test Kitchen." 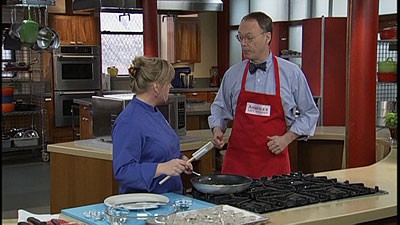 This is a seriously good food show, thanks to a good mix of personalities and (no pun intended) a great recipe as far as the show's construction goes. Using one or two dishes as the base, each half-hour show blends in a mix of sides, including taste tests and kitchen equipment reviews, along with other tips and tidbits. It's very much like a TV version of the organization's print magazine, Cook's Illustrated, and as such is just the kind of cooking show that appeals to me.

The series is hosted by Christopher Kimball, a bowtie and glasses-wearing guy whose geeky exterior belies an energetic persona, a forceful attitude about food and a good sense of humor. He interacts with the chefs and experts on the show as they prepare recipes or present testing results. The great thing about the cooking is the testing that precedes it, as the Test Kitchen tries out various ways of making the meal, to find the best method possible, and explains why it works, like a less-scientific Alton Brown.

Instead of just plowing forward with the cooking via the traditional switch to pre-prepped food, when the process calls for some oven-time or simmering, they switch over to one of the "departments," answering mail, looking at cooking gear and comparing mainstream and gourmet food brands. The flow from segment to segment is wonderfully natural, leaving the show free of lulls or dead spots, and maintaining the series' sense of energy and fun, which is helped by a friendly, engaging group of guests, including chefs Julia Collin and Sandra Wu, and testing pros Adam Ried and Jack Bishop.

Though the structure, personalities and the diverse mix of recipes and tips, covering everything from cookies to barbeque, Italian to Chinese, make for a great show, there is one thing about the DVDs that's a bit annoying and that's the commercials. I understand that this is a PBS production, and thus, every dollar is precious, but getting the same group of underwriter ads at the start and end of each episode, along with ads for the show's cookbook (which comes with these very same DVDs) and web site, is a bit aggravating when you've already paid for the discs. But when you have a show this good, it's a bit easy to forgive such sins. 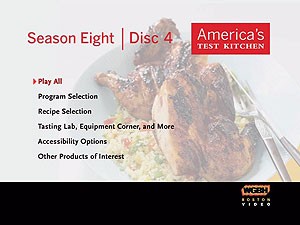 The DVDs
The 26 episodes in Season Eight of "America's Test Kitchen" are spread over four DVDs, which are packed in a quartet of slipcased clear ThinPaks, with covers that list the episodes and segments. The discs have static full-frame main menus, with options to watch all the episodes, select shows, choose segments and see info on Accessibility and other WGBH DVDs. The segment selections are nicely organized, so you can choose from groups of recipes and info sessions, making it easy to pick and choose, but the lack of a play-all option on the recipes and equipment/tasting sections is a pain. There are no audio or subtitle options, but there is closed captioning.

The Quality
The anamorphic widescreen transfers on this series are something of a positively mixed bag, most likely a result of the production. There are a number of cameras covering the cooking segments, and there's a range of quality in the coverage. The main camera is good, but slightly soft, while the direct camera looking at the food is incredibly sharp, colorful and detailed, coming close to high-definition in terms of quality. It's actually mouth-watering to see this footage. Then there's the camera on the guest, which, though sharp and clean, is shaky as hell. Overall though, the show looks quite good and won't disappoint a soul, with no dirt, damage or digital artifacts to be found.

The sound is pretty simple, with Dolby Digital 2.0 tracks that present the dialogue and light music very well. There's nothing dynamic or system-testing here, but you wouldn't expect anything like that, because it just doesn't make sense for the show.

The Extras
There are no extras, other than the screen showing other WGBH releases. 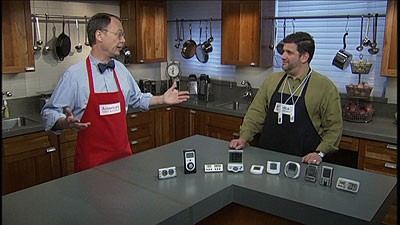 The Bottom Line
I'm kind of kicking myself for not catching up with this show earlier, thanks to my prejudice against PBS cooking shows. "America's Test Kitchen" can sit comfortably with the best shows that Food Network has to offer, with interesting kitchen info and an excellent presentation. The DVDs look and sound solid, though there's nothing extra to enjoy beyond the 26 episodes. It's easy to recommend this series to anyone interested in TV cooking, and even to anyone just interested in how cooking actually works.