The idea of mixing sounds with visuals in order to enhance a musical performance isn't groundbreaking. During the early 80s French industrial guru Jean-Michelle Jarre began experimenting with a number of live sets where fascinating visuals often proved to be much more enticing than his eclectic mix of ambient tunes. Jarre also chose some particularly stunning locations for his most successful performances and audiences adored his flashy style. Other artists followed up (Yanni, Enya, Enigma, Era, etc).

However while pop musicians made major strides in embracing visual enhancements classical performers were never keen on experimenting. The few who dared do so (Nigel Kennedy) were more impressive reinventing their own style of performing than revolutionizing the manner in which classical music is appreciated. Some (Apocalyptica) actually went the opposite direction and began performing pop music using classical instruments, thus, hoping to bring the two closer.

I sense that Transcriptions is a project whose aspirations come somewhere in between the two trends mentioned above. The classical music on this disc is offered via strong and exceptionally well done arrangements that in the opinion of this reviewer provide both freshness and unique style to works many should be familiar with.

The key surprise however is the addition of visuals meant to further enhance what the actual arrangements promote: variety and a new appreciation for classical music. Does this extra footage however match the style of the works herein discussed? It is hard to say. I suppose many will be puzzled by the addition of industrial lighting and minimalistic shots while listening to the works of Barber and Prokofiev. But some are likely to embrace Transcriptions precisely because it is so cutting-edge, mixing the old with the new.

I personally tend to be less than enthusiastic about Transcriptions. While the performances by Accentus are impressive and demanding the viewer's attention the scattered visuals, which often break into the live footage on this disc, seemed out of context to me. They detracted from my enjoyment rather than further enhance it. 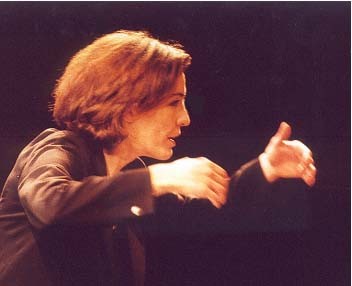 Schubert: Grablied (from the Death and the Maiden Quartet); Nacht und Träume

Vivaldi: Winter (from The Four Seasons)

Note: Aside from Samuel Barber who did his own transcription for Agnus Dei the rest of the transcriptions are courtesy of Peter Cornelius, Clytus Gottwald, Franck Krawczyk, Thierry Machuel, and Gérard Pesson.

Transcriptions arrives with a 1.78:1 transfer enhanced for widescreen TVs. This being said it was quite difficult for me to determine what was intentional in this transfer and what was not. The picture quality varies dramatically where the extra footage I mentioned in the review above is introduced. There is heavy grain here which I am certain is intentional and light is used in a variety of different ways - at times its role is rather subdued while occasionally the manner in which the camera moves obviously allows contrast, lighting, and even the color scheme to be greatly manipulated reflecting the dramatic progression of the classical works the choir is singing. Once again, as far as I am concerned everything appears to be handled expertly (though there are a few areas where I simply am guessing as to how contrast and lighting are meant to complement each other).

Very good. There are two tracks on this disc - a PCM and a 5.1 mix. Both of those tracks stand on their own, they are very well mixed, the music comes off the speakers flawlessly, and I did not detect any sound distortions to report here whatsoever. This being said on my equipment the PCM track had much more clarity and depth. I am unsure why but when I listened to the 5.1 track the intensity in the Barber Adagio for example was not as good. Either way I believe that it is a matter of taste, you could certainly pick whichever track suits you best.

Here you will actually have access to the Ravel bit. Aside from that there is a large discography which offers various samples from other works. The real gem however is the lavish booklet which Arte have provided, in French and English, where the full texts for the vocal transcriptions are provided, a history of Accentus, and short essays by the authors for some of the transcriptions.

I am going to recommend this lavish set based entirely on the outstanding performances by Accentus. The transcriptions are simply fabulous. This being said, I personally opted not to view the imagery that complements the vocal performances.