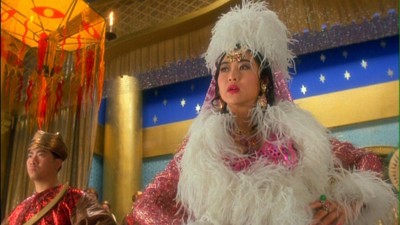 Made in 1993, the Chinese comedy Eagle Shooting Heroes (Dong Cheng Xi Jiu) is a parody of the wuxia genre, the flamboyant martial arts movies that years later would become popular in the U.S. through arty takes on the format like Crouching Tiger, Hidden Dragon and House of Flying Daggers. Classically, these historical kung-fu pictures were far less high-brow, more mainstream entertainment and were often based on sprawling prose serials featuring larger than life heroes, impossible quests, and eternal love. In this case, Eagle Shooting Heroes is based on a novel by the master Louis Cha, and it's the same novel that provided the story for producer Wong Kar-Wai's more serious directorial effort, Ashes of Time, a year later. Apparently Kar-Wai saw a greater opportunity in Cha's convoluted plots and crazy fighters, going forward with two different takes on the same text.

Directed by Jeffrey Lau, who has helmed various incarnations of Chinese Odyssey over the years, and written by no one apparently (there is no credited screenplay), Eagle Shooting Heroes is as nuts as anything that came out of the Zucker factory post-Airplane and generally as hit-and-miss as those low-brow satires, as well. It's only intermittently funny, and even then probably only if you have some passing knowledge of wuxia conventions. Lau and his cast appear to have never met a silly joke they haven't liked, even resorting to Three Stooges-style eye pokes and rubber gorilla suits. When you press play, buckle up and expect anything.

Plot is immaterial in this sprawling movie. I was never entirely sure who was after what mystical book or royal seal, nor could I always tell who hated whom and why. Dastardly master of the bullfrog school of kung-fu Ouyang Feng (Tony Leung Chi Wah, 2046) and his lover (Veronica Yip) want to take over China (presumably) and must capture the Third Princess (Brigitte Lin, Chungking Express) to clear the way to the throne. Along the way, they enlist the help of a bumbling sorceress (Maggie Cheung, In the Mood for Love), while the Princess is teamed up with a naïve martial artist named Yaoshi (Leslie Cheung, Happy Together). Yaoshi has a lover, Suqiu (Joey Wang, A Chinese Ghost Story), who jealousy pursues the pair, while also attracting the attention of the king of the beggars, Hong Qi (Jacky Cheung, Days of Being Wild). Hong Qi teams with Feng, Suqiu teams with the Princess' fiancée Duan (Tony Leung Ka Fai, Lost in Beijing), and everyone gets chased by the vengeance seeking, chubby homosexual Zho Botong (2046's Carina Lau playing a man). Most of the characters change allegiances at least once, several do so while hallucinating, and one even becomes a floating head before ascending to Heaven. This should give you a hint of how crazy Eagle Shooting Heroes gets.

In the course of 103 minutes, Eagle Shooting Heroes covers multiple searches for eternal love, musical numbers, gender bending, comic misunderstandings, and at its best, big fight scenes. Most of the cast were also part of Ashes of Time (and also formed a kind of Wong Kar-Wai ensemble troupe over the years), and most of them were extremely skilled in movie martial arts. It helped that the stunts were all coordinated by Sammo Hung, who also worked with Bruce Lee and Jackie Chan, meaning that the action is both exciting and funny. Really, it's the fights that are the best part of Eagle Shooting Heroes, when the movie can take a break from the headache-inducing script (or lack thereof) and show off a little. Of particular note is an extended duel between Tony Leung Chi Wah and Jacky Cheung. Hong Qi has decided he would rather die than live without Suqiu, and he enlists Feng to do the deed for him; only, he can't hold back his reflexes, and every time Feng goes in for the kill, Hong Qi devastates him, leaving him a bruised and swollen mess. It also features some of the more fun plays on the various martial arts styles. In addition to Feng's bullfrog system, this movie also has a Tsunami Fist, Flirty Eyes Sword Style, and other strangely named attack techniques.

The big finale is also an over-the-top extravaganza, with the entire cast engaging in one massive brawl. The sets and the costumes are incredible to look at throughout the movie (well, except for the gorilla and his friends the eagle and the dinosaur), but they are particularly bright and colorful in the palace. Eagle Shooting Heroes was shot by the awesome Peter Pau (Crouching Tiger, The Promise), which only adds to the incredible roster of talent that threw standards to the wind and made this goofball adventure. It makes it all the more of a waste that Wong Kar-Wai didn't hire a real comedy writer to whip the material into shape. All of his people are ready to totally go for it, just what "it" is seems to confuse them all. 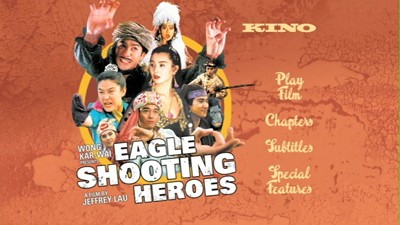 Video:
The 1.85:1 picture on the Eagle Shooting Heroes DVD is pretty nice. The colors are really sharp, and the overall image quality is preserved nicely. I didn't notice any real problems with dirt or scratches, and the basic presentation is solid.

Sound:
A standard audio mix of the Cantonese soundtrack is average. The sounds are all clear and the tones are right on, but there isn't much activity from speaker to speaker, which is kind of a shame given the amount of sound effects in the fight scenes. The optional English subtitles are well written without any real mistakes and paced at a readable speed.

Extras:
The only two extras are a trailer for the film and a stills gallery.

FINAL THOUGHTS:
Comedy is the most subjective genre on its best days, and with such genre specific parodies as Eagle Shooting Heroes, they are even more an of acquired taste. If you've only ever seen Crouching Tiger, Hidden Dragon and Hero, then a lot of Eagle Shooting Heroes will jet right over your head, kind of like trying to watch The Rutles when the only reason you've heard of Paul McCartney is because he's that guy in Wings (the band, not the TV show). Even if you are a fan, this Wong Kar-Wai-produced and Jeffrey Lau-directed no-brainer connects with more wiffle balls than it does home runs in the laughs department. Most of the relationship stuff degenerates into nonsense, with only the action sequences to bail the picture out. Still, those anxiously awaiting Ashes of Time Redux may want to kill a little time with this other Louis Cha adaptation in the interim. Rent It. 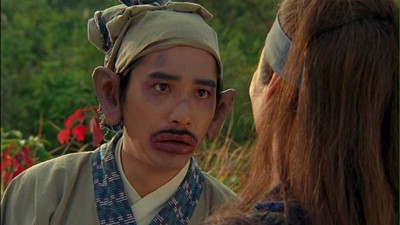