Love to Keep, A

A made-for-TV Spanish drama A Love to Keep (original title is Electroshock) is the latest addition to PictureThis Entertainment and their diverse catalog of coming-of-age and gay-lesbian films. Written, produced, and directed by Juan Carlos Clavier pic attempts to shed light on the wide spread discrimination gay and lesbian couples were exposed to during the Franco regime. 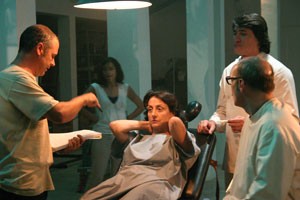 Pilar (Carmen Elías) is madly in love with Elvira (Susi Sánchez). The two like to spend time together, listen to music, dance, and laugh. But they have to pay close attention to what their neighbors think of them. They must share their passion for each other only behind closed doors.

Determined to put an end to her medical condition Pilar's family agrees to send their daughter to an experimental facility where advanced methods are used to reform patients with questionable sexual behavior. Elvira is told to stay away from Pilar if she wishes to keep her job as a teacher. Pilar is taken away.

Recreating one of the darkest periods of Spain's not so distant past A Love to Keep is a film mixing plenty of drama with a good dose of soap opera sentimentality. The well documented tortures Franco's regime resorted to in order to cleanse the Spanish state (gays, lesbians, and gypsies, were the target of a mass "sanitizing" campaign) are used as a pretext to tell a moving story about love in a time of enormous social, moral, and political stagnation.

There is a lot in A Love to Keep that comes dangerously close to Stanley Kubrick's A Clockwork Orange. At least during the first half. In Kubrick's film violence and the desire to degrade are countered with a series of abstract "medical" tests where the patient is expected to react in a certain way, be cured. In A love to Keep a similar approach is used to address what Franco's regime apparently regarded as a serious moral illness - same sex relationships. The difference between the two films is that during the late 70s Spanish officials did indeed legitimize the experiment addressed in this film.

Put aside the controversial premise for A Love to Keep however and the rest is hardly comparable to Kubrick's masterpiece. After a series of fruitless attempts to locate Pilar's whereabouts Elvira turns to her family. Pilar's mother rejects her while her father decides to help. Suddenly the film loses its magnetic drive from the first half and conveniently settles for a sentimental finale with a questionable message. More or less this is where one truly notices that A Love to Keep was meant for Spanish TV.

Technically Juan Carlos Claver and team do a good job of capturing the spirit of a time many Spaniards remember with mixed feelings. While the cinematography isn't lavish by any stretch of the imagination it is well conceived and accurately recreating an environment where the sense of dictatorial order is easy to detect. The part of the film where Pilar is seen entering and consequently leaving the sanatorium is particularly memorable.

Winner of the Audience Award for Best Lesbian Feature at Outflix, Memphis 2007. During the same year the film was nominated for Best TV Movie at the ATV Awards, Spain.

Presented in an aspect ratio of 1.78:1 and enhanced for widescreen TVs A Love to Keep is somewhat of a departure from PictureThis Entertainment and their high standards. The transfer for this DVD release is notably soft, often lacking depth, and apparently interlaced. There is mild "combing" that I was able to detect on my TV and I most am certain other viewers will recognize as well. In addition, there is visible digital noise. Edge-enhancement in general isn't an issue of concern but it is also present. Overall, as mentioned earlier, this DVD release is slightly below what we have come to expect from the US distributor and I suspect that the majority of it has to do with the elements they were given to work with.

Presented with a Spanish 5.1 and 2.0 tracks the film sounds quite well. The 5.1 mix is well rendered with the dialog very easy to follow and the music coming off the speakers without any issues that I was able to detect. Hissing, pop-ups, or cracks are not present. Optional English subtitles are provided for the main feature.

Aside from the trailer for A Love to Keep on this disc you will also find a standard "Making of" where the cast and crew discuss the story behind the film (dubbed) as well as some of the political subtext(s) in it. There is also an interview section where the leads as well as the director comment on their work (also dubbed).

I enjoyed this film. Perhaps not as much as I wanted to but nevertheless I thought that the story was powerful and engaging enough, especially during the first half, to keep me interested. I particularly enjoyed Carmen Elias as Pilar and hope to see her again in the future. The DVD presentation by PictureThis Entertainment is slightly less convincing than what I have seen them producing. Still, if interested in the subject A Love to Keep focuses on you should certainly rent this film.