Winner of the Best Director and Best Cinematography Awards at the San Sebastian International Film Festival Zhang Yang's Sunflower (2006) arrives to US shores courtesy of New Yorker Video. Beautifully lensed, charged with subtle political overtones, and exceptionally well-played pic should capture the hearts of those interested in intelligent cinema.

Nine-year-old Xiangyang (Zhang Fan) has never seen his father. His mother (Joan Chen) would rarely talk about him telling her son only what he needs to know. And now after many years spent in a reform camp Xianngyan's father is finally back. But calling a stranger father and learning how to live with him under the same roof isn't easy. Not for Xiangyang. He is often frustrated, enraged, and confused by his father's words. And so is Xiandyang's father - he dreams of the day when his son will finally call him father.

Some years later... Xiangyang has mastered the art of drawing. His father wishes to send him to a prestigious school where Xiangyang will succeed at everything his father failed. He would become a respected man. But the more Xiangyang thinks about the future the more he is convinced that college isn't where he belongs. 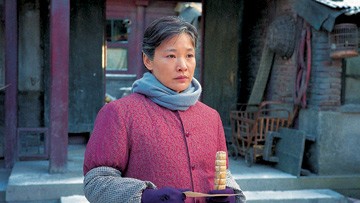 Using an interpersonal family drama as a pretext to offer a much broader picture of China and the enormous political and cultural changes the state has undergone during the last decade Sunflower is a film that made an enormous impression on me. It is magnificently composed and with a distinctive look impossible to forget. Whether through the little boy's struggles to embrace his new father or through the young man's desire to avoid a restrictive socio-political regime Zhang Yang's focus in Sunflower is clear - his country is evolving and so are his people.

Seen strictly as am emotional journey of maturation Sunflower is also quite entertaining, though admittedly not as far reaching. The main characters for example are often oversimplified as their grasp on crucial events (Mao's death, a catastrophic earthquake, etc) lack the convincing tone a more intimate approach to the script would have introduced. Change within Xiangyang's family arrives abruptly.

Still, Sunflower never stutters. Its poetic visuals are both engrossing and at the same time in harsh dissonance with the main character's persisting personal demons. As such, the film's construction very much replicates China's deeply divisive, unjust if you will, socio-political scene where people are forced to adjust their lives to the liking of those who run the country. Just as sunflowers adjust to the sun.

From a purely technical point of view Sunflower delights with an epic look where cinematographer Jong Lin reveals an impressive sense of finesse. The long debates between a father and son struggling to embrace each other for different reasons are immaculately lensed as to allow two different worlds to be analyzed simultaneously - that of an awkwardly independent young boy as well as the world of a man who senses that times are changing. Sunflower also boasts a memorable soundtrack comprised of excellent ambient tunes courtesy of Chinese composer Hai Lin.

Presented in its original aspect ratio of 1.85:1 and enhanced for widescreen TVs Sunflower is distributed in the US by New Yorker Video. The transfer on this disc is quite pleasing with a good contrast scheme and mostly pleasing colors. Detail is certainly above average and given the transfer's lack of disturbing edge enhancement patterns the overall look is certainly something many would be satisfied with. Unfortunately, Sunflower is marred by what has become New Yorker's marquee approach to SDVD transfers - lack of progressive treatment. This is an interlaced transfer which some of you will quickly notice tends to produce "combing". In all fairness however the effect is not as distracting as I have seen it on other releases by the distrib.

There are two audio tracks here - a Mandarin 2.0 and 5.1 mixes. As I noted in te review Sunflower boasts an excellent ambient soundtrack but somewhat surprisingly the audio encoders have not done a great deal to bring forward its subtlety - there is hardly any surround activity that you shall be impressed with. This being said I did not detect any cracks, pop-ups, or hissing. With optional English subtitles.

In extras department you shall find a featurette titled The Making of Sunflower which is broken into four segments where in addition to interviews we are given a glimpse at the cast completing the film. While the interviews address mostly the technical side of this project there are some revealing comments as well.

Sunflower is a surprisingly beautiful and emotional film that reminded me of Zhang Yimou's To Live (1994). It paints a telling picture of a country and its people struggling to adjust to the winds of change while remaining emotionally attached to a past rotted deeply in a cruel totalitarian regime. The DVD, courtesy of New Yorker Video, is rather good and treating the film fairly sans the lack of progressive treatment. Recommended.