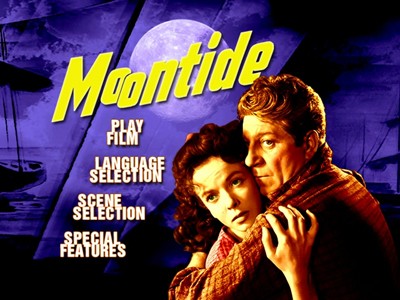 Jean Gabin was one of the earliest stars of French cinema, sort of like the Parisian Humphrey Bogart. A man's man and an extremely physical actor, he played tough guys in movies like Pepe le Moko and Port of Shadows. When I call him a physical actor, I don't mean that he was doing stunts like Erol Flynn and jumping around, but that he acted with his entire body, becoming the role in full the way Gerard Depardieu would decades later (or, for a more contemporary reference, Javier Bardem). At the same time, he also had that classic Hollywood quality where, regardless of the role he played, he was always Jean Gabin. His gestures, his way of speaking, the very way he carried himself--all Jean Gabin.

Archie Mayo's 1942 suspense picture Moontide was Gabin's first Hollywood production after emigrating stateside when the Germans rolled into France. In it, Gabin is still very much Gabin, but this time in English. He plays Bobo, a carefree dockworker in his cups on the Southern California coast. Bobo sees life as a party, and he hits the whiskey pretty heavy to keep it going. The whiskey hits back pretty hard, too, leaving the seaman with many nights unaccounted for. One in particular may need more accounting for than others: an old salt that Bobo argued with early in the evening is dead by morning, having been strangled. It seems maybe Bobo has killed with his hands before, and he may have done so again. His buddy Tiny (Thomas Mitchell) might know, but Tiny may also be keeping his lips zipped just to keep the Bobo gravy train going. It pays to harbor a man's secrets.

Things go the other way the next night, however, when Bobo sees a young woman trying to drown herself and pulls her out of the water. Anna (Ida Lupino) is a waitress with secrets of her own, and Bobo refuses to hear what drove the lady into the water, instead letting secrets remain so. Though traditionally a wanderer, Bobo decides to settle down and run a bait shop with Anna. Naturally, Tiny doesn't like seeing his ship moored, and so he tries to make trouble for the couple. It becomes a game of who knows what, who is bluffing, and who will call those bluffs.

For his American debut, Gabin surrounds himself with a marvelous ensemble of actors, and he more than holds his own. Bobo is a character who takes whatever comes how it comes, and Gabin let's his body hang loose for the role, saying just as much with his graceful and comic hand gestures as he does through dialogue. He's excellent with Lupino, whose frail demeanor is perfect for the world-weary Anna. She goes from tentative to increasingly confident in Bobo's care, even eventually mustering the strength to stand up to Tiny. As the bad guy, Thomas Mitchell almost owns the whole show. The character actor is probably best known as Uncle Billy in It's A Wonderful Life and the Mayor in High Noon, far cheerier roles than this one, and it's actually a shame he didn't get to be the heavy more often. Tiny is a real bottom-feeding weasel, the kind of guy you love to hate and whose mere presence adds tension to a scene. If you said that they didn't have to cue Bobo's dog to growl at him every time he came near, he just got testy because Mitchell made the canine believe he really was a lout, I'd believe you. He also brings an intriguingly obsessive edge to the role that lends some fire to the homoerotic undertones in the Tiny/Bobo relationship. Being gay would certainly explain why Bobo keeps taking off to go fishing or work on an engine rather than spend the night with his woman, which otherwise just looks like a clumsy device to clear the way for Tiny to victimize Anna.

Of the strong cast, only Claude Rains (Casablanca) seems to be playing under his usual caliber. Perhaps it's just the nature of his role, though. The character of Nutsy is more of an observer who occasionally doles out some barroom wisdom rather than being a completely active participant in the melodrama. The part certainly isn't the only thing undercooked in Moontide. Despite having such amazing actors and a narrative gumbo that practically demands Mayo pour on the spice, Moontide is a pot that never boils. The entire picture moves at an even pace, never speeding up to match the bloodlust or slowing down to enjoy any other kind. The direction is workmanlike, only mustering up any semblance of a style in a few of the late-night shots and one amazing, Dali-inspired drunken montage. Then again, how hard is it to get a dramatic image by backlighting an actor on a foggy coastline? Plus, we don't know how much of that was really Fritz Lang, who left the movie after two weeks of shooting, making room for Mayo.

Moontide is neither dark enough for a noir, nor histrionic enough to be a truly effective melodrama. The seas should rage, but instead, the waves roll in calmly with barely enough force to push a dead body ashore. Not a terrible movie, but not all that memorable either--just disappointing. 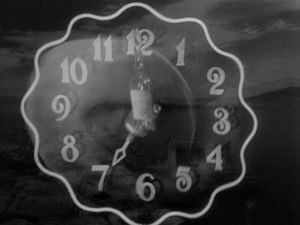 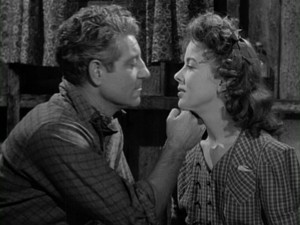 Video:
Moontide is shown at a full-frame 1.33:1 aspect ratio. Given that the film begins with a disclaimer stating that the DVD was mastered from the best possible source material, I steeled myself for a bad presentation; I'm happy to report that this was unnecessary. The picture quality on Moontide is fairly decent, with very few instances of dirt or scratches and mostly good blacks throughout the production, including in the few moody scenes when it really counts. If there is anything to complain about, it's that the resolution is occasionally soft, but even that is not a rampant problem. A solid job.

Sound:
The English mix is in Dolby Mono, and it is also a fairly solid job. There is nothing special about it, but there are also no glitches, off-tones, or any hiss.

Extras:
For longtime followers of the Fox Film Noir line, get ready for a little grousing. Though Moontide carries the series banner, the studio has dropped the spine numbering on their latest wave. They have also stopped including the paper insert with liner notes for the picture.

Thankfully, they do still include a handful of extras, including commentary by author Foster Hirsch, who has previously shown up on commentaries for House of Strangers and Fourteen Hours, among others, and as a commentator on other noir featurettes on discs like Daisy Kenyon. He does his usual exhaustive job, getting down to the factual nitty gritty about the background of the film, as well as talking about the thematic and stylistic particulars of Moontide.

Also included is a documentary, "Turning the Tide: The Ill-Starred Making of Moontide." Twenty-five minutes long, it features critics and commentators (including former DVD Talk contributor Kim Morgan) discussing the production, covering the coming of Jean Gabin to America, the origins of the story and its surprisingly frank themes (and how they were originally more frank), the brief Salvador Dali involvement, and how Fritz Lang was originally going to direct the picture. (Thinking of the superior Clash By Night, it gives one a basic idea of how this picture could have gone under Lang's command.)

Four photo galleries run us through the various aspects of production: Behind the Scenes, Concept Art and Poster Gallery, Glamour Shots, and Production Stills. There are also trailers for four other Fox Film Noir titles, though not one for Moontide.

FINAL THOUGHTS:
Rent It. Despite an amazing cast that includes Jean Gabin, Ida Lupino, and the surprisingly slimy Thomas Mitchell, Archie Mayo's production of Moontide never quite makes it into shore. A dark tale about a romance between an alcoholic drifter and the fragile soul he pulls out of the ocean when she tries to kill herself, it's an overly staid, bloodless motion picture. Mitchell makes a sinister villain, and Gabin and Lupino have great chemistry together, but the whole movie sails at an even keel that completely misses the emotional peaks and valleys inherent in the story. 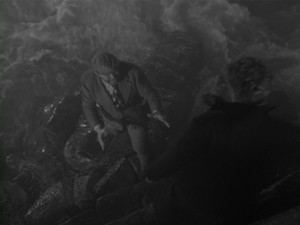 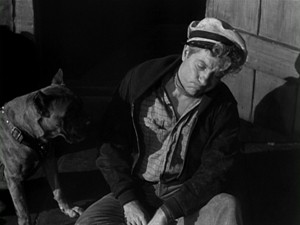