Chronicle of an Escape

Winner of the Best Film, Best Screenplay, and Best Editing awards granted by the Argentinean Film Critics Association Cronica de una fuga a.k.a Chronicle of an Escape (2006) arrives to US shores courtesy of Weinstein/IFC Films. Based on a real-life story pic provides a glimpse at Argentina's "National Reorganization Process" and the methods its supporters utilized to squash outspoken leftists.

A soccer player (Rodrigo De La Serna) is kidnapped by the Argentinean secret police and thrown into an unknown villa used as an interrogation facility. There, together with a group of leftists, he is tortured and asked to leak information about his "comrades". Unable to provide his captors with the needed info the man is routinely exposed to mental and physical abuse rivaling what the Nazis resorted to during WW2. His misery is ended when together with three other detainees the man manages to escape the well guarded villa.

While not as expansive as Luis Puenzo's The Official Story (1985) Uruguayan-born Adrián Caetano's Chronicle of an Escape is just as controversial and enraging. It goes deep behind the politically correct façade Argentinean rightists have built since 1983 and brings back to life a fragment of the country's past that will never be forgotten. Through at times impossible to endure graphic torture the fear and sense of paranoia the Junta instilled in Argentinean hearts is reintroduced in a manner far more successful than what Christopher Hampton's Imagining Argentina (2003) delivered. From start to finish Caetano's film is a roller-coaster of unspeakable violence and human drama. 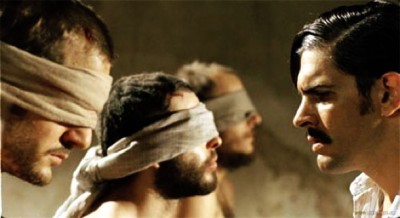 The majority of Chronicle of an Escape takes place in the villa where the detainees are kept, only the last twenty or so minutes actually grant the viewer the opportunity to witness the outside world. Not surprisingly the suffocating sense of paranoia (the tortured men are consistently asked to wear blindfolds) is incredibly well-maintained as more or less the audience is exposed to the same kind of uncertainty the men fear. Caetano's hand-held camera also contributes to the film's distinctively gritty aura.

Rodrigo De la Serna, Pablo Echarri, Nazareno Casero, and Lautaro Delgado are all magnificent as the characters they play. Their unshaven faces, shivering bodies, and eyes overflowing with fear are beyond convincing. Especially during the first interrogation scene where De la Serna's head is repeatedly forced into a bath full of dirty water one would be hard pressed not to react to the violence seen on the screen. Caetano's camera absorbs the entire scene flawlessly while adding even more to the horror with its jerky, abrupt movements.

The film comes to an end without producing any excessive, politically-correct, statements. After the detainees flee the villa the audience is informed about the fate of the real-life characters Chronicle of an Escape documents. There aren't condemning words here or calls for retaliation. The human drama that takes place on the screen more or less speaks for itself.

The title of the film Cronica de una fuga, which translates into "Chronicle of a Fugue", refers to the famous musical form popularized by J.S. Bach where a perpetually recurring musical theme typically feeds off an entire composition.

Presented in an aspect ratio of 1.85:1 and enhanced for widescreen TVs Chronicle of an Escape arrives on DVD with a stellar, progressive, properly converted transfer. The color-scheme is very strong, detail solid, and edge-enhancement hardly a factor. The overall gritty look of the film is preserved expertly - even when blown through a digital projector the image remains tight, convincingly adding to the picture's unsettling story. To sum it all up Weinstein and IFC Films have delivered a solid print of the film which will most certainly meet the expectations of those with high-end home setups.

A Spanish 5.1 track with optional English, Spanish, and English (CC) subtitles is what we have here. This being said, the audio treatment is just as solid as the video presentation is. There is plenty of activity from the rear channels and the dialog is as crisp and clear as one could expect from such a recent production. I did not detect any disturbing hissing(s), pop-ups, or cracks.

Aside from the original theatrical trailer for the main feature and a cast and crew info on this disc you will find a large section of deleted scenes (approx. 20 min), a less-than generic "Making Of" where the crew is seen in action as well as discussing how the message of the film. In addition, there is a great documentary titled "Trip to Stockholm: Visiting Former Exiled Captives Claudio Tamburrini and Guillermo Fernandez" which actually reunites the director of the film with the man whose story inspired Chronicle of an Escape. Even though this is a rather short piece showing the exiles playing soccer and poking jokes about the past there is something eerie about the manner these men talk about their misfortune. I strongly recommend that you spare a few minutes and look at the documentary.

A gritty and highly emotional political drama recreating a past many Argentinians are still struggling to come to terms with Chronicle of an Escape is a film impossible to forget. It is brutal and enraging. It is also exceptionally well-acted. There are critics that have spoken against the film's excessive violence, claiming that it adds little to the personal drama of the captured men, but I disagree. The fear and suffocating sense of paranoia are what separate this film from most every other film with a similar thematic construction. The DVD herein reviewed, courtesy of IFC Films, is of very high quality offering some excellent supplemental materials as well. Highly Recommended.