Pete Seeger - The Power of Song

Genius Products // PG-13 // August 5, 2008
List Price: $24.95 [Buy now and save at Amazon]
Review by Stuart Galbraith IV | posted September 3, 2008 | E-mail the Author
A wonderful movie about a true American hero, Pete Seeger - The Power of Song (2007) is something like a follow-up to director Jim Brown's emotional first documentary, The Weavers - Wasn't That a Time! (1982), one of the DVD format's great unreleased titles. The Power of Song fleshes out Seeger's incredible life story beyond his years with the iconic folk group, detailing his early life and encounters with greats like Woody Guthrie to his later years. Significantly, there's a preponderance of footage of Seeger, now in his late-eighties, in new interview footage. His voice isn't as strong as it once was, but he's still chopping firewood, visiting elementary schools singing "This Land is Your Land" with enthusiastic children and, occasionally, coaxed into performing to adoring audiences. Like Wasn't That a Time! it's a very moving film, ultimately a very uplifting one, and one that invites the viewer to sing along, something Seeger doubtlessly would approve of. 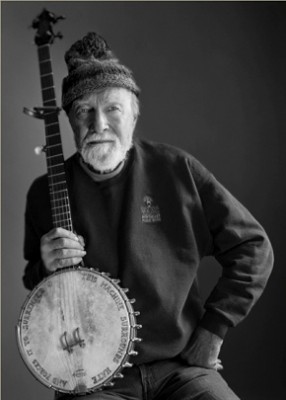 Infused with an enthusiasm for traditional folk music by his parents, who once toured the country in a covered wagon-type affair performing classical music in rural communities, Seeger (b. 1919) eventually went to Harvard, became politically active, worked for the Library of Congress's Archive of American Folk Song, took up the banjo, and hopped freight trains with Woody Guthrie, with whom he frequently performed.

He became lifelong friends with folk pioneer Lee Hays and performed with Guthrie, Hays and others as the Almanac Singers, and later with Hays, Ronnie Gilbert and Fred Hellerman founded The Weavers in 1948. With songs such as "Good Night Irene," "Kisses Sweeter Than Wine" and "Wimoweh," The Weavers hit the big time, reaching a large mainstream audience. They also became the only singing group blacklisted during the dark days of McCarthyism.

Seeger, a communist, campaigned for civil rights in the 1930s, long before most of the people reading this review (and many of their parents) were even born. He sang for labor unions, and supported and performed on behalf of Henry A. Wallace when the former Vice President (under Franklin Roosevelt) ran for the presidency in 1948 as the Progressive Party's candidate. These and other activities led to a subpoena to appear before the House Un-American Activities Committee, where Seeger courageously refused to plead either the Fifth Amendment or name names of political associates. He was indicted for contempt of congress, resulting in a long legal battle unresolved until 1962.

Though blacklisted from television for something like 17 years, Seeger's popularity and certainly his influence only grew. Songs he wrote or contributed to, including "If I Had a Hammer (The Hammer Song)," "Where Have All the Flowers Gone?" "Turn, Turn, Turn!" and "We Shall Overcome" became anthems for the 1960s. The Smothers Brothers eventually broke Seeger's exile from television (on which he sang the controversial anti-Vietnam War song "Waist Deep in the Big Muddy"), despite network pressure and threats by conservative groups. The documentary even chronicles an incredible story of one man, a disturbed Vietnam veteran, appearing at a performance intent on assassinating Seeger, but who changed his mind after hearing Seeger perform "Bring 'Em Home" and other songs.

The Power of Song tells this story and then some; it's a perfect tribute, enormously satisfying. The only thing it left this viewer wondering if Seeger's wife and her Japanese family were affected by the Japanese interments of World War II or if they were somehow spared that injustice; the film leaves that question unanswered. The show is buttressed by great observations by myriad siblings, children, and grandchildren, and especially Seeger's devoted wife, Toshi. Heavyweights like Bob Dylan, Bruce Springsteen, Joan Baez, and Bonnie Raitt express Seeger's profound impact on American music, both as a preservationist and as a kind of Johnny Appleseed of Song, a "citizen artist" as Springsteen puts it.

Seeger himself is interviewed also, usually in the company of his wife, brother, or other musicians. The camera follows him as he visits places where he grew up; at one point an older woman stops him on the street, saying with great sincerity something like "I have to thank you for who you are and what you've done." Amen to that.

Pete Seeger - The Power of Song is presented in 1.78:1 widescreen with 16:9 enhancement. The show looks great and the old clips are nicely integrated. Of course, many of the songs are from mono sources, but the English Dolby Digital 5.1 audio is very nice throughout, and accompanied by optional English and Spanish subtitles. Song lyrics are subtitled.

Supplements include 3 Additional Scenes ("School of the Americas," "Strawberry Festival" and "Ice Skating") perhaps wisely excised from the feature but more charming stuff for the DVD. The Seegers themselves shot a number of short films in 16mm, mostly in the 1960s, and 5 of these short films are included: How to Play the Five-String Banjo, Singing Fishermen of Ghana, Wrapping Paper, How to Make a Steel Drum, and Fight Song. These are interesting and a nice supplement to the main feature.

Pete Seeger - The Power of Song is a great documentary, a must-see like Brown's earlier Wasn't That a Time!. It's the story of a survivor, a songwriter, a banjo teacher, an environmentalist, an iconoclast, a peacemaker, and most importantly a man who liked to get a bunch of people in a room together and get 'em singing. A DVD Talk Collector Series title.