Sex and friendship are the key ingredients in Gallic helmer Celine Sciamma's directorial debut Naissance des pieuvres a.k.a Water Lilies (2007). Stripped of political correctness, honest, and superbly-acted pic follows the deeds of three teenagers whose desire to overcome socially-restrictive clichés while experimenting with their bodies creates and breaks friendships with long-term consequences.

Floriane (Adele Haenel), a beautiful swimmer, is liked by boys and men. She flirts with them and occasionally goes out with those who are brave enough to approach her. Floriane likes the attention but not the risks that come with it.

Marie (Pauline Acquart) is not a swimmer and she never gets approached by the boys. But she likes watching Floriane's swimming team practice. Marie asks Floriane if she could come along and swim with the team.

Anne (Louise Blachère) has been Marie's best friend forever. She also likes Floriane's boyfriend. After failing to attract his attention Anne decides to give him a gift. 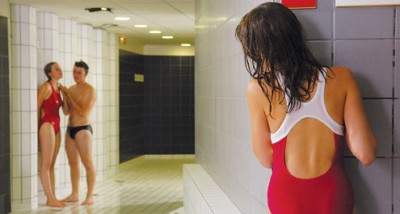 Screened during last year's Cannes Film Festival Celine Sciamma's Water Lilies is very much a film that Hollywood would never have the guts to produce. Not because it is explicit. Rather, because it is so honest it would likely confuse a lot of viewers whose interest in the genre Water Lilies belongs to begins and ends with everything MTV-esque.

First, it shows teenagers as being vulnerable and capable of acting like human beings without relying on chic slang and pointless pop stereotypes to convince us that they are real. The trio of friends in Water Lilies is exposed to numerous tests where they have to prove that they belong amongst the rest of their peers. But they are not walking and talking like Hollywood producers demand, they stumble, get hurt, and learn to be normal like most teenagers do - by failing and learning from their mistakes.

Second, Water Lilies focuses on a taboo-theme Hollywood dreads - teenage sex. The film attempts to convey the enormous pressure teenagers must cope with when attempting to express their crushes, heterosexual and same-sex, without resorting to moralistic preaching.

Third, the dialog is so refreshing it actually makes you want to sit and follow the story. Not pop in an aspirin and check your newly acquired slang-dictionary to figure out what you were missing.

The delicate camera work (the underwater shots carry a heavy context-message) also infuses the story with a near ambient feel where the young actors truly shine. Some of the best scenes in Water Lilies are also the ones devoid of dialog - the camera does a supreme job in capturing the enormous pressure each of the three friends must cope with.

Finally, it shows that Water Lilies is the creation of a female-director. The film addresses female sensuality in a manner I don't believe a man could replicate. Its quiet depiction of all the risks young girls must face on their way to adulthood is spectacular.

Presented in its original aspect ratio of 1.85:1 and enhanced for widescreen TVs Water Lilies arrives to US shores courtesy of Koch Lorber Films. Boasting a very strong color-scheme and excellent contrast the print for this R1 release certainly looks good. Edge-enhancement isn't a major issue and blown through a digital projector the image remains tight to the frame. Unfortunately, the transfer is interlaced. Combing isn't truly a distracting factor here, in fact it mostly gravitates between weak to mild, but those of you with more sensitive home set-ups might be able to detect it. This being said, the master print for this R1 release must have been in excellent condition as the transfer is spotless.

Presented with a French DD track and optional English subtitles the audio treatment for Water Lilies is good. The dialog is exceptionally easy to follow and I did not detect any hissing, pop-ups, cracks. Unfortunately, I am more or less disappointed that the R1 distribs have not added a more elaborate sound mix. Having a French 5.1 track would have been great given the truly atmospheric soundtrack.

Aside from a few previews for other Koch Lorber Films releases and a trailer for Water Lilies on this disc you will also find a collage of deleted scenes as well as a few "casting segments" where the young actors are seen practicing their lines.

I enjoyed Water Lilies a great deal. It is beautifully scripted, magnificently acted, and filmed with a sense of finesse those of you who enjoyed Pawel Pawlikowski's My Summer of Love (2004) will certainly appreciate. The transfer for the DVD is quite good despite of the fact that there is a mild dose of "combing". Highly Recommended.