Poisoned By Polonium: The Litvinenko File 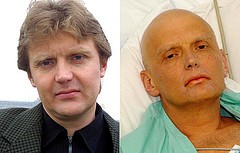 On November 26, 2006 Alexander Litvinenko, an ex-KGB agent and later on a senior operational officer at FSB (the Federal Security Service) died in a London hospital. The cause of his death - radiation poisoning by Polonium 210. Only days before his death "agent Sasha" would give a video tape containing reveling information about Russia's political elite to film director Andrei Nekrasov. On May 26, 2007 Poisoned by Polonium would be screened at the Cannes Film Festival.

Andrei Nekrasov's Poisoned by Polonium feels very much like Damiano Damiani's TV project La Piovra (1984). Only instead of being the product of a film director with an impressive imagination Poisoned by Polonium turned out to be the testament of a man who apparently died because of his revelations.

Alexander Litvinenko's name became known to mainstream media approximately two years ago when it was reported that he was poisoned by a deadly dose of Polonium 210 after visiting a London restaurant where the ex-KGB officer, then living in exile in the United Kingdom, was to receive crucial information pertaining to the much-publicized murder of Russian journalist Anna Politkovskaya. He fell ill and eventually died with his murders still at large.

The film, a collection of interviews and revealing footage addressing the fate of ex-KGB and current FSB officials, presents a chilling picture of modern-day Russia where the once powerful checkists have taken firm control over state and government. Through a series of interviews Vladimir Putin, also an ex-KGB operative, is linked to and blamed for a number of controversial political events ranging from the assassination of Anna Politkovskaya and the humanitarian crisis in St. Petersburg during his days as a mayor of the city all the way to the legal proceedings initiated by a Lichtenstein court placing the Russian president's name next to a powerful drug cartel from Colombia. Whether or not Litvinenko's tape proves that these accusations are credible is of course up to anyone to decide. What is clear, at least as far as this reviewer is concerned, is that the ex-KGB official who replaced Yeltsin is certainly a controversial figure whose iron grip on the Russian state has produced the type of social vacuum criminals desire.

There is hardly any controversy, however, in the panorama of tragic events Poisoned by Polonium puts in perspective. Footage showing badly disfigured bodies of children who were caught in crossfire during the Chechen war, the bombing and demolition of a massive residential apartment building by "terrorists", the mafia-style execution of journalists who critiqued Putin's cabinet, and a very telling interview with Litvinenko's comrades who openly admit that upper-echelon officials ordered them to commit murder are deeply disturbing. Indeed, even if every single accusation uttered by Litvinenko in Poisoned by Polonium was unfounded the archive footage where other state and secret service officials are on record admitting some mind-boggling deeds is flat-out disturbing.

Yet, Sasha died. And something tells me there is a lot of what is said in this documentary about Mr. Putin that is anything but the product of a man with an agenda. Was Litvinenko speaking the truth, was he punished by Kremlin because of his words, was he a bitter traitor making stories up or a man who had the courage to question his bosses?

Think about this: Polonium 210 is a highly-toxic substance only a few countries in the world are capable of producing (Russia being the biggest producer). Each year only a few grams are extracted in extremely well secured industrial facilities. Only a few people with top-level government clearance have access to the substance. So, what are the chances that Russian-produced Polonium (because of the complex process extracting Polonium 210 necessitates it is relatively easy to determine the origin of the substance and it is proven by UK specialists that Litvinenko died of Russian-produced Polonium 210), would enter the UK and be used for the poisoning of an ex-Russian spy who openly confronted Mr. Putin?

Presented in an aspect ratio of 1.85:1 and enhanced for widescreen TVs Poisoned by Polonium arrives to US shores courtesy of KINO. The film offers a mix of interviews and archive footage and as expected the quality of the material here varies. Some of the more recent footage is obviously of better quality while some of the dated material reveal mild to strong damage signs. Nevertheless, the overall condition of the transfer provided by KINO is more than adequate. Obviously it is quite difficult to tell whether or not this is a progressive transfer and as far as I am concerned this isn't an issue that should be addressed at all. The message of Poisoned by Polonium (especially that offered by the archival footage) is much more valuable.

Presented with a mix of Russian, German, French, and English, and optional English subtitles, Poisoned by Polonium sounds good. The dialog, especially during the original interviews, is very easy to follow. During the archive footage occasionally you would notice that there are issues with balance and clarity but as these are present on the original source I don't think that there is anything you should be dissatisfied with.

There is a revealing interview with Litvinenko's widow, Marina, and the co-author of her book on him, Alex Goldfrab, in English, where they share their thoughts on the UK government's struggle to provide any sort of closure to this most disturbing case. Specific facts surrounding the death of Litvinenko are also discussed. In addition, there filmography for Andrei Nekrasov. Aside from the above mentioned extras on this disc you shall also find two short films by the director of Poisoned by Polonium - first, "Blowing Up Russia", a documentary based on Litvinenko's book, paints a larger and quite grim picture of modern day Russia where criminal elements have legalized their operations. The documentary also sheds a bit of light on ordinary Russians and their struggle to survive the Putin-regime. Next, is the documentary "The Hero of our Time" about a major figure from Poisoned by Polonium, M. Trepashkin, whose struggle with the authorities in Russia as well as revealing comments about agent Sasha and why he might have been executed offer a few extra, quite interesting, point of views.

A truly disturbing film with some profoundly shocking revelations about Russia and its political elite Poisoned by Polonium asks questions it seems many in the West already have answers for. Unfortunately, the same people who have the power to confront the appropriate parties responsible for Litvinenko's death have once again chosen to remain silent. Which is very much the reason why criminals in Russia evolved from being criminals into politicians and powerful businessmen. While Poisoned by Polonium fails to make it clear the West is just as guilty in remaining inactive and fixated on the lucrative markets the ex-communist bloc offered after the end of the Cold War as are those who provided the deadly Polonium 210 to Litvinenko's killers.