After the War: Life Post-Yugoslavia

Other // Unrated
List Price: $20.00 [Buy now and save at Buyolympia]
Review by Chris Neilson | posted September 10, 2008 | E-mail the Author
After the War: Life Post-Yugoslavia, the first release from independent DVD distributor A Million Movies a Minute, is a 150-minute compilation of nine documentary shorts from five filmmakers. Several of the shorts have received critical acclaim on the film festival circuit but none have otherwise been screened or broadcast in North America.

Four of the shorts are by Serbian documentarian Zelimir Gvardio. I Don't Know Where, or When, or How (Ne znam ni gde ni kad ni kako, 8 min., 1994) highlights the dramatic increase in deaths among the elderly in the Yugoslav republics, mostly due to neglect, during the 1990s through intimate portraits of a handful of frail seniors in nursing care. Father, Son, Holy Ghost (Otac, sin, sveti duh, 19min., 1998) includes three distinct stories of families fractured by the war. Ravens (Crni gavrani, 14 min., 2001), another story of a fractured family, considers three generations of men: a young Serbian soldier killed by a NATO air strike; his father, a man that finds no glory or sense in his son's death; and the soldier's grandfather, a proud Serbian ultra-nationalist that would gladly have sacrifice a hundred grandsons if it would have preserved Yugoslavia intact. It's Only Mine (To je samo moje, 16 min., 2003) documents the stymied efforts of families that had their homes and businesses seized by the Communist State sixty years ago to reestablish their property rights now. 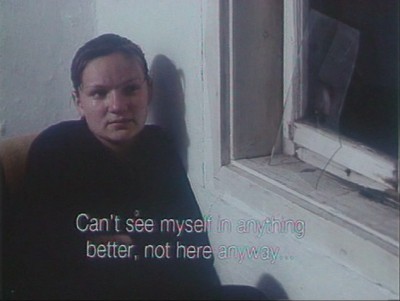 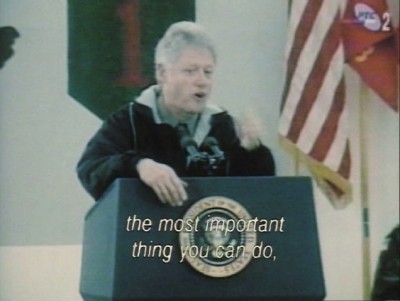 Bosnian filmmaker Jasmila Zbanic, winner of the 2006 Golden Bear at the Berlin Film Fest for her first feature film Grbavica: The Land of My Dreams, contributes two shorts. Red Rubber Boots (18 min., 2000) documents a mother's search for the bodies of her missing children among mass graves. Though the remains are no longer recognizable, she hopes to identify her son by the red rubber boots he was wearing on the day he was taken away by the Serbian Army. Through Images from the Corner (32 min., 2003), the longest short in this collection, Zbanic criticizes the decision of a French photojournalist to take pictures of a Sarajevo woman injured by shelling rather than help her. Zbanic reconstructs the events by speaking with people in the neighborhood and the emergency room staff, and she both narrates and discusses her reactions with colleagues. On principle, however, she does not include the prize-winning photograph in her short. 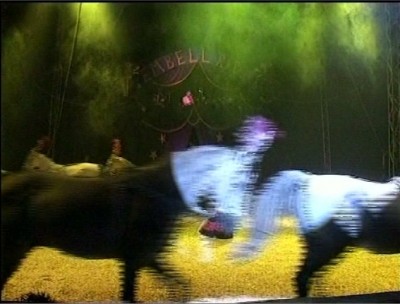 Images from the Corner 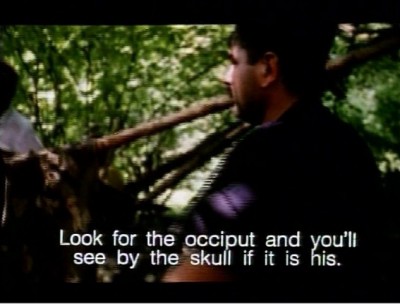 In A Conversation with Harris, American filmmaker Shelia Sofian accompanies an audio interview of an eleven year-old Bosnian immigrant to the United States with beautiful animation which compliments the emotional impact of the boy's tragic story. The first film of Peruvian-American academic Roberto Forns-Broggi, House of Wisdom (13 min.) is a personal essay on the torching of the Bosnian National Library in Sarajevo by the Serbian Army. In Cowboys in Kosovo (24 min., 2004), Dutch filmmaker Corinne van Egeraat encourages a group of Kosovo Albanians, who grew up watching Americans westerns, to recount their wartime experiences while dressing up as cowboys.

Presentation
Video:
The video quality varies between poor and atrocious among the shorts. Problems include combing, aliasing, compression errors, low resolution, bad color levels, and print damage. Widescreen material is letterboxed, and subtitles are burnt in.

Audio:
There is no attempt at consistent sound levels between the shorts, so be prepared to adjust the volume separately for each.

Extras:
All of the shorts include a director's biography. There is also a director's commentary for House of Wisdom, and a painting-on-glass animation demonstration for A Conversation with Harris.

Final Thoughts:
The nine shorts included in After the War: Life Post-Yugoslavia are uniformly grim, but qualitatively uneven. Shelia Sofian's A Conversation with Harris is the only one I'd unreservedly recommend. Jasmila Zbanic's Red Rubber Boots is especially grim, but effective. The four by Zelimir Gvardio are interesting though they all seem inadequate in length to their subjects. Unfortunately, the remainder of the bunch are unsatisfying: Images from the Corner needs tighter editing; Cowboys in Kosovo needs a different motif; and, House of Wisdom needs a different filmmaker.

If the video and audio quality on this release were better, After the War: Life Post-Yugoslavia might be worth renting for people particularly interested in the subject matter, but not as is.