Polish-born, now living in America, director Lech Majewski's Blood of a Poet (2007), originally titled Glass Lips, focuses on the abstract and bizarre while telling a story about child abuse and the power of religion. Fractured into small, very confusing, bits and at times impossible to decipher references, pic is likely to attract only viewers with utmost tolerance for avant-garde cinema.

Probably the most challenging film I've seen this year Glass Lips is a collage of visuals lacking any form of dialog whatsoever. It follows the story of a mental patient (Patryk Czajka) whose childhood recollections about an abusive father (Grzegorz Przybyl) and an understanding but helpless mother (Joanna Litwin) are linked with a series of abstract scenes where puzzling symbolism is the focus of attention.

The majority of Glass Lips tiptoes between present and past attempting to explain the history behind the patient's medical condition. The first half of the film emphasizes the severity of the physical and moral degradation the man has suffered as a boy (an especially disturbing scene where the father asks the boy to eat dog food comes to mind) while the second half introduces confusing parallels with religion.

The bulk of the film, however, remains a mystery. The heavily surreal imagery is often impossible to align in a logical manner and aside from the obvious skips between past and present the rest feels like a chaotic exercise of experimental filmmaking. I don't know whether or not adding dialog would have helped the story but it certainly would have not hurt it given its construction.

Part of the reason why Glass Lips appears so disjointed is probably due to the fact that it is composed of thirty-three short films lacking a unifying theme. Majewski's fascination with the beauty of dysfunctionalism is more or less justified here but unless you share the same fascination about abstract imagery as the director does chances are you will be unable to rationalize what Glass Lips strives to achieve. 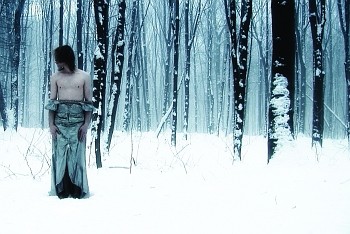 Glass Lips also boasts a fittingly ambient soundtrack composed by the director himself. It supports the hypnotic aura of the film very well adding an extra layer of abstract overtones to the already puzzling visuals.

Presented in its original aspect ratio of 1.85:1 and enhanced for widescreen TVs Glass Lips arrives on DVD courtesy of KINO. The disc is largely of good quality. It is interlaced (not-progressive) but the color-scheme is acceptable, contrast appears to be adequate, and I certainly did not detect any damage, dirt, or debris. Edge-enhancement is not an issue of concern even though I was able to spot its presence a few times. Detail is also acceptable though given the film's abstract construction it is quite difficult to tell what is intended and what isn't. Overall, for those of you interested in experimenting with the work of Lech Majewski this disc by KINO certainly comes recommended.

As mentioned in the synopsis above Glass Lips is devoid of any dialog. Sporadic bits of ambient music here and there are all that you would get here. Even those however are rather subdued as if to allow the viewer to fully concentrate on the abstract visuals.

Aside from a text-format biography for the director there is nothing else to be found here.

A difficult to deconstruct feature with a distinctive abstract construction likely to frustrate more viewers than it would entice Glass Lips is for the most adventurous amongst film aficionados. I personally liked the uncommon themes the film juxtaposes even though I had a difficult time rationalizing their intent. From the four Lech Majewski films KINO has released thus far this is indeed the most abstract and challenging one. Recommended only if willing to experiment.