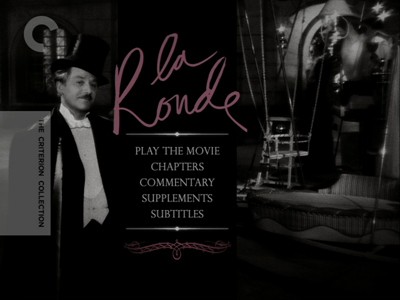 The French term "la ronde" has multiple meanings. It can refer to a policeman's beat, the rounds he walks when protecting the peace. It's also a circle of dancers, moving in an unbroken ring. One can find both of these meanings in Max Ophuls' 1950 film La ronde, an adaptation of a play by Arthur Schnitzler. The original German title of the stage drama was Reigen, which also refers to dancing, and this circular collection of interconnected short stories has a structure not unlike a dance, with lovers switching partners at the start of every new tune.

The construction of La ronde is a sophisticated treat, deceptively light but full of purpose. Some might call the snippets of story Ophuls put together a smorgasbord of amuse bouche, of inconsequential pleasures that tantalize the taste buds but offer little nourishment. On their own, they don't seem like much. Put them all together, however, and there is quite a meal here, the appetizer sampler being more than enough dinner to satisfy. Set in Europe at the turn of the 20th Century, each scene is built around a specific pair, and when one member of the pair--working in a girl, boy, girl, boy rhyme scheme--breaks away from his or her lover, he or she then moves on to the next, introducing the partner that will lead on to the next pair, and so on until we are back where we started. The prostitute meets the soldier, the soldier toys with the girl at the ball, the girl at the ball becomes the maid to a horny young rich boy, the horny young rich boy has an affair with a married woman, and so on up the social ladder until a snooty count stands up a vain actress to sleep with the same prostitute who earlier lured the lower-ranking soldier into the shadows for a quick affair.

Within these twirls and trade-offs, we see the consequences of social dalliances, examine questions of love and commitment, witness times good and bad, egos massaged and feelings bruised. It's romantic, but the romance of cynics, ending on a bittersweet note. Many of these lovers are seeking something they've lost in arms that look familiar but that belong to strangers. La ronde is the circular nostalgia of the heart. The emotionally crippled husband (Fernard Gravey) remarks that it's a wonder any man marries after the humiliation and defilement of his first encounter with a woman, but when we meet his fickle young mistress (Odette Joyeux), we can surmise that in reality he is still trying to recapture that first taste of youthful passion.

Amidst these ever-changing lovers is one constant, a narrator of sorts credited as meneur de jeu, or the ringmaster. Played by Anton Walbrook, he is the all-seeing embodiment of La ronde. He turns the wheel on the carousel, an added meaning to the circle of the story, going around and around, always passing the same landmarks. This merry-go-round is like a diorama of the greater story, its decorations matching up with the various characters, and its operation reflective of the success of the love affairs. If it speeds up, their progress does, too; if it breaks down, they can't perform. (Impotence jokes in 1950? Who'da thunk it?)

In following the stories, Walbrook is also the cop on his route. He cues the music to start each dance, or in some cases, he breaks the fourth wall and uses a director's clapboard to mark the scene. From the get-go, he busts the reality of his narrative, showing us the stage upon which the drama had once been performed and the movie set that has become its new venue. He appears within the story as a participant, playing a waiter and a servant, among other things, but at other times he talks directly to some of the women, crossing the bounds of time and fictional reality to let, say, the lovely but fragile Marie (Simone Simon) know that she will be okay, her bad treatment by Franz, the soldier (Serge Regiani), will not be the end of her. In one clever moment, this ringmaster is even shown cutting a strip of film, noting that a scandalous love scene between the actress (Isa Miranda) and the count (Gerard Philipe) has had to be censored. 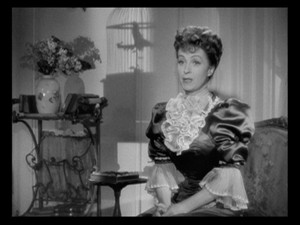 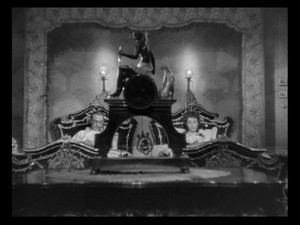 The film-cutting sequence is not the only visually inventive moment of La ronde--and ironically, a major part of Ophuls cinematic style is not cutting the film, letting takes go long, covering whole sections of dialogue without chopping up the scene. Ophuls' sense of composition is wonderful, and he regularly frames his scenes in such a way to add another layer of symbolic meaning. When the cheating wife (Danielle Darrieux) is first entertaining the notion of having an affair with the rich boy (Daniel Gelin), Ophuls sits her opposite a bird cage, and he lights the room so that its shadow is projected on the wall behind her, showing the tenuous bonds of her self-imposed jail. In the next scene, when she's back with her husband, he shoots them in their separate beds, looking past a clock that takes up most of the foreground, emphasizing the time that they have been sentenced to serve, a union that is meant to last forever but that ultimately leads to them just treading water, watching the minutes pass. Time is quite important in the circle. The characters are always conscious of time, worried that it will run out before they get what they want, and twice two jilted lovers are told the same lie regarding how late the hour has grown.

I found the ringmaster's sympathy for all of his characters most fascinating. Though some do warrant more intervention than others and he reserves most of his empathy for the women he observes (he begins the film with kind words for the prostitute, played by the legendary Simone Signoret), he seems to feel sorry for all of them and their inability to satisfy the yearnings of their heart. The husband may have some laughable and even regrettable things to say when he speaks to his wife, but he's still pitiable as the cuckold, even moreso when his mistress also jilts him--for a poet (Jean-Louis Barrault), no less! The two most openly scheming lovers are the soldiers, both the haughty count and Franz, the more coarse soldier who first meets the prostitute and then breaks Marie's heart. When they pass in the final scene, however, the ringmaster seems pleased that the military men salute one another, but also sad that they are stuck in this routine, the demands of duty being another wall between them and true affection.

Though really a drama, Ophuls maintains the breezy style of musical theatre for La ronde, even having his meneur de jeu sing a couple of songs that set up the film and connect some of the scenes. (This character and his antics were, apparently, Ophuls' major addition to the play.) Heavy topics of the politics of love and sex are broached, but the film always maintains a light tone that is highly attractive. This style serves the greater point of the script, which is to say that we should allow life to continue on its path, enjoy ourselves, and accept what comes. We may desire more for ourselves, but who among us hasn't? It's the same as it ever was, and so it goes. 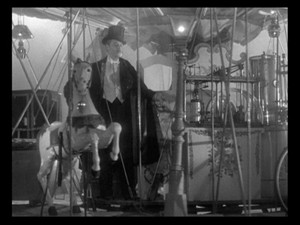 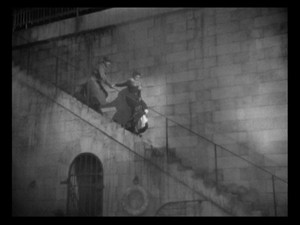 Video:
Criterion's new 1.33:1 full-frame image for La ronde is a quality restoration job. There are a couple of scenes where there are some scratches on the frame, but these are short and you don't even need all the fingers of one hand to count them. The quality of the image throughout is fantastic, with good tonal values on the black-and-white picture. It's excellent work.

The image is picture-boxed (a.k.a. window-boxed), meaning that there are black bars on all four sides of the frame.

Sound:
The original French soundtrack is presented in mono, with optional English subtitles. The quality of the mix is solid, without any extra noise or off qualities. The titles are written well and paced properly.

Extras:
La ronde is the first of three 1950s movies from Max Ophuls currently being released by Criterion, and it establishes a specific trade dress for the packaging that is new for the production company. The movie is in a gatefold book that slides into a full-color outer slipcase. The interior of the book has a tray for the DVD and a pocket for the 16-page booklet that accompanies the disc. The booklet contains photos, cast and crew credits, a chapter listing, and a new essay by noted film critic Terrence Rafferty. The package artwork by David Downton, with design and menu work by Eric Skillman, hits the right balance of classical artistry and the airiness of Ophuls' work. Each DVD is beautiful unto itself, but as a trio, it's an excellent set. I'm surprised they were put out individually, actually, and not as a box. 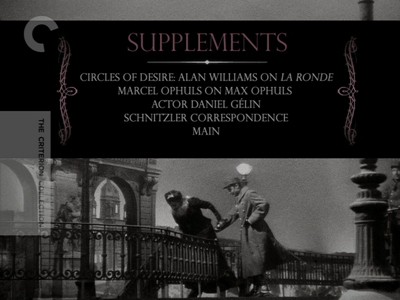 In addition to quality packaging, the La ronde - Criterion Collection disc also has quality extras. These supplements are lead by a full-length audio commentary by Ophuls scholar Susan White. The track is detailed and informative, offering both a critical analysis of the movie alongside stories about its production and the cast and crew.

There are three video interviews about the film: another Ophuls scholar, Alan Williams, talking at length about the history of the director and this production, and how the film stacks up against the Schnitzler play (35 minutes); Marcel Ophuls, the son of Max Ophuls, focuses on the German ex-pat's return to France from Hollywood and the undertaking that was La ronde, with an emphasis on personal details (6:45); and actor Daniel Gelin, who played the rich young lover in La ronde (12:30). The last interview was conducted in 1989, and is the only one not in English and not recorded specifically for this disc. Gelin talks about being a young, upcoming actor and how La ronde was his joyful big break.

Three letters are reproduced as a text feature, showing Sir Laurence Olivier's request of Heinrich Schnitzler, son of playwright Arthur, to allow him to mount a stage production of the original play, Reigen. It's an informative piece about the troubled history of the 1903 play and why Schnitzler forbad any productions of it. This also includes explanation as to how Ophuls could make the film despite this request.

FINAL THOUGHTS:
Highly Recommended. La Ronde - Criterion Collection is a tasty little pleasure. A social drama that lightly steps across class boundaries to look at the bedroom antics of a variety of characters, taking in both comic and tragic details at the same time. Max Ophuls' return to French cinema is a marvel of structure and design, its circular storytelling and creative eye breaking boundaries in entertaining, intriguing ways. The extras that come on the disc are informative and expand the viewer's understanding of the picture, making for a most excellent DVD package. 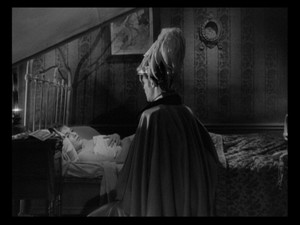 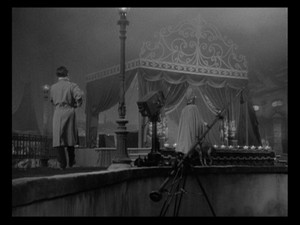