The third installment in the recently released collection of Lech Majewski films offers the director's most personal film - the autobiographical opera The Roe's Room (1997). Written, composed, and directed by Lech Majewski the work follows cycles of memories while also introducing beautiful, at times hypnotic, abstract imagery.

Similar to Lech Majewski's The Gospel According to Harry(1994) and Glass Lips (2007) his The Roe's Room is very much an experimental feature where minimalism and symbolism are key ingredients. This time around, however, a collage of personal recollections is apparently the instigator for the unusually beautifully scripted opera.

Relying on simple but effective harmonies to achieve a calming, near meditative, feel for his work Majewski accomplishes a sense of serenity that remains with the audience until the final credits roll. Scene after scene the camera's careful observation of the main protagonists is what drives the tempo of the opera - there aren't any secondary plots nor there are any key dramatic resolutions here. Rather, as it is the case with Glass Lips, one is expected to react to the visuals which complimented with the beautiful music do indeed create a very unusual atmosphere. 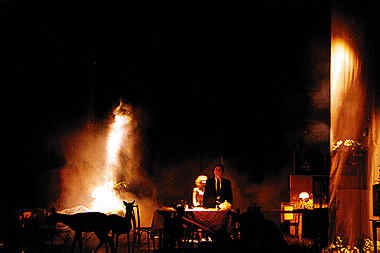 A stage performance of The Roe's Room
The mother (Elzbieta Mazur), father (Mieczyslaw Czepulonis), and son (Rafal Olbrychski) in The Roe's Room never speak. Only the music of Majewski allows for "communication" to occur when different scenes (or events from the director's past if you will) are recreated. Assisted by the Polish National Symphony and the Silesian Opera Chorus the actors' contribution here is more or less symbolic.

From a purely technical point of view The Roe's Room isn't a departure from the director's desire to experiment. Abstract visuals are mixed with more traditional imagery allowing for the same fascinating but arguably chaotic order of events Glass Lips reveals. As if to force the viewer to completely let go of any conventional stereotypes about how a story is told in a film The Roe's Room is very much a hallucinatory puzzle with difficult to fully deconstruct symbolism.

Presented in its original aspect ratio of 1.33:1 The Roe's Room looks on par with the rest of Lech Majewski's films released by KINO - this is an interlaced transfer with acceptable basics. The opera was shot with a digital camera and both detail and colors here are rather convincing. This being said, the majority of the opera takes place indoors and when a sufficient amount of light isn't present there are notable limitations that become apparent (macro-blocking, noise, etc). Still, The Roe's Room is probably the best looking disc from the entire collection.

Presented with a Polish DD track (music) and optional English and French subtitles The Roe's Room sounds good but not exceptional. The music comes off the speakers without any pop-ups, cracks, or hissing that I could detect and the excellent performances by the singers (and choir) are indeed easy to appreciate. I have not seen the opera on stage and I am unaware precisely what the director's intentions were but it seems to me that the evocative music could have greatly benefited from a more elaborate treatment (a 5.1 mix would have been great). Still, this is an adequate presentation without any disturbing technical flaws.

Aside from a text-format biography for Lech Majewski on this disc you will find a commentary by the director where he talks about his project, what it was meant to reveal (personal history), and how it was made possible. A great deal of info is allocated, as expected, to the music. This being said, this is a substantially better analysis by Lech Majewski, far more informative and much more detailed than the one heard on The Gospel According to Harry.

Visually-enticing, evocative, and with a soundtrack capable of existing on its own The Roe's Room is arguably the best of the four films by Lech Majewski KINO have released. It appears to be a very personal project though it still builds on the marquee for the Polish director universal symbolism. The music performances are truly haunting. Once again, I am going to recommend this disc to those willing to experiment.