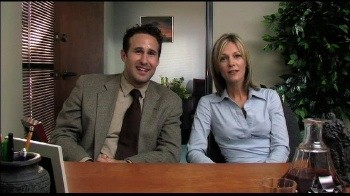 The Movie
Do we really need shots of ironic motivational posters inserted into bitter office comedies anymore? I get it, but it's played. "Hang in there, baby!" is sooooo Simpsons circa 1997: "Determined or not, that cat must be long dead. That's kind of a downer." Oh, Marge! Just thinking of your quotable observation made me laugh more (once) than this movie. Okay, it's not that bad, but it's not that good, either.

And then there's that damn mustache. It had be a joke within the movie, right? Every time writer/director Blayne Weaver was on screen as asshole sales manager Kirk Hastings, I thought for sure that his ridiculous fake rodent was going to fall off his face (it comes close a few times), immediately followed by some explanation...maybe he was covering up for extreme self-loathing? At the very least, I thought, the other characters in Outside Sales would acknowledge his Groucho-like appearance behind his back and make fun of the out-of-control facial hair. Is it supposed to be funny? (It's just distracting...)

Mixing elements of The Office, (the overrated) Office Space and Forgetting Sarah Marshall (made years after this 2006 effort), Outside Sales aspires to those levels of wit--but trips over its uneven script. Successful salesman Paul Wells (the likeable Lucas Fleischer) is the top dog at Automated Payroll Technology, selling software like hotcakes. But when he stumbles upon his wife having sex with rival salesman Kirk, he loses all ambition, spiraling into a depression that leaves him a whiny, sad sack. "Jesus, Paul!" claims co-worker Cap (executive producer Brandon Barrera). "Where's your self-esteem?!"

Paul moves into his argumentative neighbors' house, renting out their son's bunk bed while his wife continues to see Kirk (and collects alimony from him after they get divorced). He also loses out on a promotion at work--a position that goes to Kirk, his new boss. "Something broke inside me that day," Paul shares. "I just got unhooked...but I couldn't fix it. I had to walk around being broken." But things are about to get worse: With his sales plummeting, Paul is about to be pushed out the door when Kirk hires hot news sales prospect Dagny Green (Tricia O'Kelley).

Attracted to and angered by her at the same time, Paul makes a rash decision: He tells Kirk that if he doesn't out-sell Dagny in 30 days, he'll quit--and double his alimony payments to his ex, effectively handing his house over to Kirk. But if Paul wins, he gets his house back. Yes, it's as dumb as it sounds, and the movie's entire plot is built around this ridiculous contest that has zero believability, a strange decision for a movie that otherwise tries to maintain some semblance of relatable (if exaggerated) office humor (emphasis on the word tries). 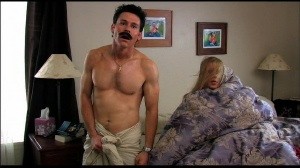 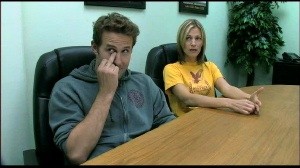 Cap is Paul's best friend, a ladies' man who just wants Paul to get laid; Sheila (Andrea Grano) is the only other saleswoman, suddenly threatened by Dagny's arrival; and Darwin (Rob Helms) is the annoying southern guy ("I'm not stupid...I just have a southern accent"). They all bicker as the contest escalates, with Paul and Dagny resorting to infantile pranks in an effort to sabotage each other's sales. Along the way, we get a lot of unfunny exchanges:

Cap: "I just 'closed' a hot Asian secretary at the Del Vista apartments...just now, in my car!"
Paul: "I thought you didn't like Asian women. You said they were cold or something..."
Cap: "That's Chinese, Paul. This girl's Korean. It's a completely different race."

Funny, ain't it?! Sheila also fires off a few quips at Dagny's expense ("Did you see the size of those cankles? They look like a couple of water balloons!"), while Dagny tries to insult Paul ("You couldn't get laid in a women's prison with a fistful of pardons"). We also get frequent trips to Paul's new home, where married couple Dominique (Tara Karsian, who you'll recognize from plenty of TV appearances) and Hank (Christopher Shaw) do a Frank and Estelle Costanza impression, only not funny. Shaw in particular is miscast, exaggerating his grumpy old man impression (and looking far too young to play dad to Danny Strong, who plays son Toby). 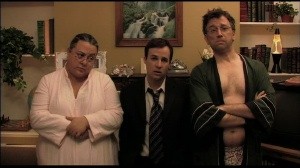 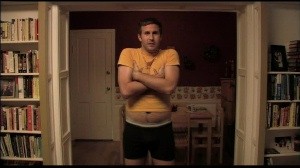 It's disappointing because the cast has talent: O'Kelley--best known now as one of the hysterical "Meanie Moms" on The New Adventures of Old Christine--does her best with the material, and more than anyone tries to breathe some realism into her character and the story's absurd situations. Fleischer, in what amounts to a Jason Segel-like role from Forgetting Sarah Marshall, has his moments, while Barrera lets a few funny lines creep in ("It was rad until she torched your Johnson" may be stupid, but I smirked). The final 20 minutes also provide a few scenes (like Dagny and Sheila's conversation in the bathroom) that give us glimmers of meaningful interaction.

But for the most part, Outside Sales just can't sell its script. This feels more like the pilot of a weak new sitcom, not the sharp indie statement it aims for. I still hold hope because there's talent behind it all, including the enthusiastic Weaver (hey, I'm a sucker for a nice chest) and most of the cast, who all seem like genuinely cool people. Looking at the cast for Weaver's upcoming Weather Girl (with O'Kelley back as the lead), I'm still very eager to see what he has in store. 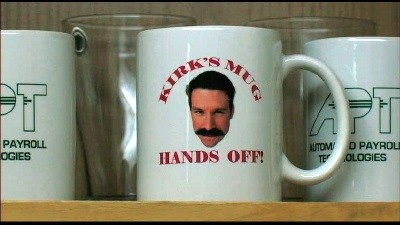 Video:
The widescreen transfer is about what you'd expect for a low budget effort. Overall it's a decent effort, although there's noticeable aliasing and edge enhancement, as well as rainbow-like color moire patterns in a few scenes. Many of the shots have a dim green tint to them, intentionally color corrected.

Audio:
The track is available in 5.1 and 2.0 options. Both work fine for the dialogue; the 5.1 track doesn't add anything memorable in terms of effects. 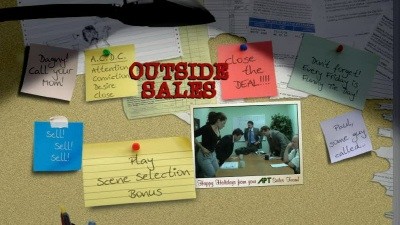 Extras:
Leading the way is an audio commentary with Blayne Weaver, Tricia O'Kelley, Lucas Fleischer and Brandon Barrera. As a reviewer, this is where I feel bad: It's a fun listen, and they all seem like close, great friends...people you'd actually love to know and hang out with. There's an infectious quality to their conversation, and I wish they just played themselves and went with a much more "normal" story for the film. They joke around and have a good time as they share tidbits about the film (Weaver wrote it based on Barrera's stories working in sales), and also have fun laughing at each other--and complimenting Weaver's chest (told you!). The film is actually a more enjoyable watch with the commentary on because of these four engaging friends.

You also get four deleted scenes (8:19) in slightly lower quality video. If you like the film you'll probably like these, although they don't add much (and one is a tad insulting). A short gag reel (2:45) provides a few laughs, especially with O'Kelley trying to act sexy with her face in a fan.

Final Thoughts:
Despite some talent in the cast, Outside Sales feels more like a tired sitcom than the witty indie effort it aims to be. Stuck with a mostly unfunny script and a ridiculous premise, it just isn't clever enough to overcome its exaggerated sense of reality and make us believe in it. Stick with The Office and Forgetting Sarah Marshall, but keep an eye on the talent here. They show promise--so much so that the audio commentary (with four cool, funny friends just joking around) actually made me enjoy watching the film. Rent It if you have time to kill, but keep the commentary on. 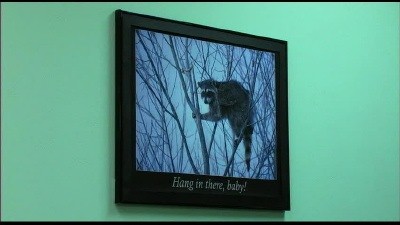