Garden of Earthly Delights, The

Arguably Lech Majewski's most intimate work to date The Garden of Earthly Delights (2004) arrives on DVD courtesy of KINO. Visually-inspiring, nuanced, and slightly less difficult to deconstruct pic chronicles the genesis of a doomed relationship in the city of love, Venice.

Chris (Chris Nightingale) is savoring the sweetest moments of his affair with Claudia (Claudine Spiteri). Over and over again he would play the video tapes where her voice would remind him about the love the couple shared. Slowly but surely Chris will succumb to a sea of polarized emotions where forgotten memories will resurface. Is this the beginning of the end?

Video tapes and memories are the key ingredients in Lech Majewski's The Garden of Earthly Delights, an adaption of the director's own Metaphysics. As past and present begin to overlap and we learn that Claudia's cancer has come back out of remission the story is reshaped into a play of its own where the main protagonists analyze the merits of a Bosch painting.

Confused? Don't be. The Garden of Earthly Delights may seem snobbish and self-centered at first but the more you spend time with Chris and his recollections the more you would begin to see how honest and transparent the story is. While the Bosch discussion is philosophic in nature its hidden message is humane, suggesting that life is nothing but a journey that eventually comes to an end.

The Garden of Earthly Delights is also far less abstract-looking. Its hand-held camera feels nervous, unsure, and brittle. Yet, the images it reveals are easy to understand, ordinary, and complete. Puzzling eccentricity (The Gospel According to Harry) and cathartic minimalism (The Roe's Room) are not used to express simple emotions. Pain, love, joy, and disappointment are all seen as they appear and fade away in real life, lacking the logical thread philosophers seek.

The devastating realization that death is inevitable arrives swiftly but instead of breaking the bond between Chris and Claudia its presence makes it stronger. The pain, obvious but unspoken, the two lovers must share is numbed by their desire to savor each and every moment of what is left to live. Not surprisingly, the earthly delights Chris and Claudia succumb to are simple but strong, just as true love is. 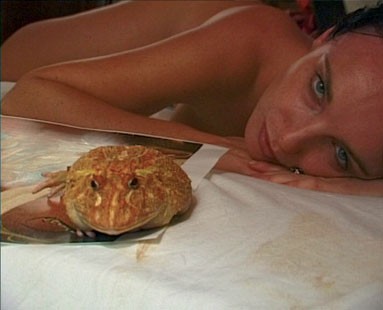 Presented in an aspect ratio of 1.78:1 and enhanced for widescreen TVs The Garden of Earthly Delights reveals the same type of treatment the rest of the films in the Lech Majewski collection have received - an interlaced but acceptable transfer. Shot with a digital camera the film does indeed reveal a complex look (a great deal of it consists of portions of recorded video footage the main protagonist uses to recall his relationship with a beautiful woman) where the quality varies. The color-scheme is largely adequate with contrast, I assume, reflecting the director's intent. Disturbing examples of damage, debris, or scratches are not present. Finally, detail appears acceptable given the mentioned earlier print limitations.

Presented with a DD English track and optional French subtitles (English subtitles are not provided) the film sounds good. The dialog is easy to follow and I did not detect any hissing, cracks, or pop-ups. The sporadic bits of music come off the speakers rather nicely. To sum it all up, the audio presentation The Garden of Earthly Delights has received is good and serving the film well.

Aside from a gallery of stills and a text-format biography for Lech Majewski on this disc there is also a full-length audio commentary (by the director). As it was the case with the other two commentaries I have commented on present on The Roe's Room and The Gospel According to Harry Lech Majewski offers some interesting thoughts on what his film is meant to reveal. More or less The Garden of Earthly Delights feels like his most accomplished (and intimate) project and a great deal of his words reflect precisely that.

The The Garden of Earthly Delights is Lech Majewski's most intimate work to date. It lacks the abstract overtones from The Gospel According to Harry, The Roe's Room, and Glass Lips but its message is far more powerful and effective. The DVD presentation by KINO is adequate but by no means spectacular.