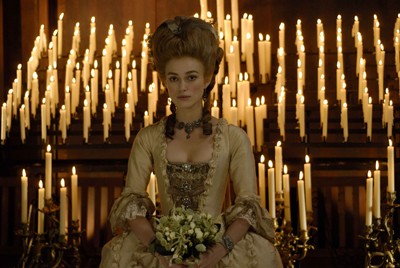 Georgiana Cavendish was an English aristocrat in the late 1700s. As the Duchess of Devonshire, married to William Cavendish, one of the most powerful men in the British government, she set the tastes for fashion amongst society women and was involved in promoting the progressive Whig party at a time where women weren't even allowed to vote, much less encouraged to raise their voices. Like most powerful people of history, her life on the public stage paled in comparison to her private dramas, making Georgiana's story ripe for a Hollywood period piece full of lurid scandals and devious plotting.

All the better, then, that writer/director Saul Dibbs, along with screenwriters Jeffrey Hatcher (Casanova) and Anders Thomas Jensen (The Funeral), eschew the typical bodice-ripping historical melodrama for something far more rich and complex in their Georgiana Cavendish biopic, The Duchess.

Keira Knightley, continuing to display more maturity with each film role, takes on the part of Georgiana, or G, as her friends call her. (Hello, Gossip Girl? Yeah, you weren't the first.) The teen is plucked from her frivolous life prompting boys to race for her as if they were her personal stable of horses and married off to the fifth Duke of Devonshire (a prickly Ralph Fiennes). After a less-than-pleasant wedding night, Georgiana quickly has her illusions of marriage dispensed with. The Duke has little interest in her as a person, being more concerned with her babymaker and whether it can cook up a male heir for him. This proves troublesome, as the first two children the Duchess successfully births are little girls. She is also charged with raising Charlotte (played at two different ages by Eva Hrela and Poppy Wigglesworth), her husband's child by one of his maids. It's a lot for a young girl with an independent mind to have to swallow.

So, Georgiana finds alternative ways to express herself. A prototype fashionista, she saw a lady's attire as the one place where a woman could shout loudly about who she really was. She also found attentive ears amongst the Whigs who swarmed around her husband, so at least some men found her frank manner of speaking charming. As one person puts it, the Duke of Devonshire is the only person in London who is not in love with his wife, and Georgiana becomes fast friends with the politician Charles Fox (Simon McBurney) and playwright Richard Sheridan (Aidan McCardle), who wrote the play School for Scandals as a brittle parody of G's marriage.

It's amongst these social circles that Georgiana meets Bess Foster (Hayley Atwell, previously alluring in Woody Allen's Cassandra's Dream), a woman of considerable reputation suffering from the worst of marriage woes herself. The Duke and Duchess take Lady Foster into their home, and no sooner has she instructed Georgiana in the ways of passion then she also becomes the Duke's mistress. Forced into a sham three-way marriage, Georgiana takes a lover of her own, her childhood sweetheart Charles Grey (Dominic Cooper), an up-and-coming Whig. It's here that her true troubles begin.

The Duchess could have been just another movie about the affairs amongst the upper crust in 18th-century England, the kind of heaving-bosom scorcher we've watched a million times before, but Dibbs sees a deeper dramatic vein to be mined here. Much is made of the double-standards that exist in society between men and women. Georgiana gets the ball rolling in her first debate with Charles Fox, noting that freedom is an either/or proposition. You either have it or you don't, and not being allowed to vote for a candidate such as himself who promises freedom is a clear indicator that she does not. So, too, can her husband take a mistress, whom Georgiana does not have a right to remove from her home, but when she takes a lover herself, it is grounds for divorce and surrendering the custody of her children. She even tries to make a deal with the Duke, you do your thing and I'll do mine, but he'll have none of it. The Duchess is caught up in one contradiction after another. Dibbs even finds in her life an early instance of the double-edged sword of celebrities being drawn into politics. The Whigs use Georgiana's fame to call attention to their candidates, but she will forever be a sideline figure, not respected for what she herself might have to contribute to the discussion. (Sarah Palin, are you receiving me?)

All of the acting in The Duchess is of top quality. Ralph Fiennes manages to find new wrinkles to yet another in a long line of emotionally impotent characters, and Hayley Atwell lands in the perfect in-between spot as Bess, a woman who is liberated in thought but knows her place in society all too well. She represents the final evolution of Georgiana's character arc, reminding her that the ultimate sacrifice women must make is to protect their children. Charlotte Rampling is also quite good as Georgiana's mother, who stresses sacrifice and social duty over personal happiness.

It's Keira Knightley's show, however, and she is marvelous to watch. I imagine her own life as a celebrity gave her some insight into the plight of the Duchess of Devonshire. All eyes are on her, and one minute everyone loves her, but the next they are more than ready to watch her fall. The actress appears equally comfortable being outspoken and rebellious as she is swallowing her pain and quietly letting the anguish play out on her face. She and her director are in perfect tandem in a pivotal moment where she enters a ballroom dance in a drunken stupor, stumbling into a darkly comic crescendo that shows just how sad and tragic the high life can be. All of the ballroom and party scenes are quite good, actually, with Dibbs taking his camera right down on the floor and getting into the mix. I may be reaching here since I just saw a bunch of Max Ophuls films, but there is something reminiscent of the great German director's way of shooting similar high society dances as dizzy events, spinning around the room and reveling in the rush of movement.

It's a shame that Saul Dibbs didn't bring the same visual tenacity to the rest of the movie. If there is a downside to The Duchess, it's that it can be relentlessly dour, and sometimes the mood overtakes all. Once the gray pallor of grief settles on the characters, the direction becomes equally anemic. Though the sight of Fiennes doting on his hounds brings laughs, dinner table scenes in the Devonshire home are all too familiar. The emotional explosions are far too reserved, the arguments being too polite and the sex all too brief. Dibbs teases us with erotic passion between Georgiana and Charles Gray, but the physical relationship between them is but a footnote to the larger picture. Since when does the politics get in the way of the sex, and not the other way around? At least when the rest of the scenes are boring, there is always some gorgeous costume to look at. Designer Michael O'Connor (Miss Pettigrew Lives for a Day) really outdoes himself when it comes to Georgiana's gowns.

Even with those problems, though, The Duchess is a fascinating portrait of a fascinating woman. The complexity of the web of manners and social convention she finds herself embroiled in make for a much more provocative script than if the writers had chosen to merely focus on who was sleeping with whom. The filmmakers and the cast raise issues that will weigh on your mind long after you leave the theatre. It's a costume drama as feminist think piece, perhaps a whole new genre unto itself.