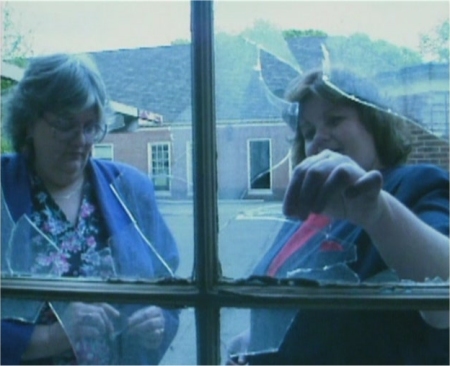 Perhaps one of the most infamous institutions in American history, Staten Island's Willowbrook State School revealed an ugly truth about the neglect of those with mental retardation. Originally built in 1942 and planned as a facility to care for these folks, the grounds were used as an Army hospital during World War II. In the years that followed, this "school" reverted back to its original purpose---and during the next few decades, a gradual decrease in funding and staff support led to a truly deplorable environment. The institution was designed with 2,000 occupants in mind; eventually, it housed almost triple that number. A three-to-one patient/staff ratio ballooned to roughly thirty-to-one on certain days. The rate of hepatitis among patients was eventually 100 percent. Lastly, the moniker of "school" was hardly appropriate, since residents were regularly given nothing to do between feeding times.

As most familiar with the case will remember, budding journalist Geraldo Rivera assembled an Emmy-winning 1972 exposé entitled "Willowbrook: The Last Great Disgrace", during which he and a camera crew procured a building key and snuck in unannounced. The disgusting conditions spoke for themselves: residents were scattered in the darkened hallways, while the stench of urine and feces hung heavily in the air. The resulting public outcry---which wasn't the first involving Willowbrook, as evidenced by hepatitis studies conducted in the previous decade---led to an attempted reform of the school and the overhaul of related institutions nationwide. Willowbrook was renamed and underwent a number of changes during the next few years, but never outgrew the scandal and closed its doors permanently in 1987. The campus of Staten Island College stands there in Willowbrook's place, though first-hand memories of this infamous institution will be remembered for decades to come.

Jack Fisher's aptly-named Unforgotten: 25 Years After Willowbrook (1997) recounts fragmented stories of those who witnessed these events directly. Completed roughly 10 years after the school's closing, Unforgotten provides a general overview of the Willowbrook saga, while several portions are narrated by actor Danny Aiello (Do The Right Thing). Through recent interviews with a few patients, their family members and Rivera himself, we're given a rough sketch of the dismal environment in just under an hour. Unfortunately, it plays out in a somewhat flat and uninspired manner---and though the stories of several individuals are certainly inspiring on their own terms, the whole of Unforgotten doesn't really tell us much we don't already know. A broader scope of interviews with former administrators or staff members would've added a great deal to this small-scale effort; after all, it was budgetary issues---not purely a lack of compassion---that ultimately led to the grim living quarters. Unfortunately, the decade-long gap between Willowbrook's closure and this production simply allowed too many doors to close.

Also belated is the film's DVD release, which may create initial confusion regarding the film's outdated title. Presented as a one-disc package by City Lights, Unforgotten manages to play fairly well on the small screen, featuring a decent technical presentation (taken from limited source material) and a few key bonus features. There's may not be enough here to win new viewers completely over, though interested parties should still find it worth a once-over. Let's take a closer look, shall we?

Presented in its original 1.33:1 aspect ratio, Unforgotten looks about as rough as you'd expect for a low-budget documentary...but it's hardly distracting. The color palette is generally dull and muted, black levels aren't very consistent and the on-screen text is sharp and clear. News segments and older photos have been window-boxed to various degrees, while some sections of on-location footage look purposefully worn and hazy. Additionally, hints of digital combing and edge enhancement can be spotted at times. This certainly isn't a visual experience overall, though most of it isn't caused by the DVD transfer.

The Dolby Digital 2.0 Stereo mix is equally underwhelming, but it still gets the job done. Most of the retrospective dialogue recorded on location is crisp and clear, though certain portions of background music and other noises tend to fight for attention. Closed Caption support is included during the main feature, but not the bonus content. 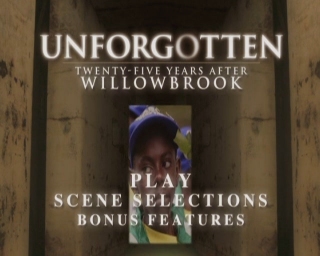 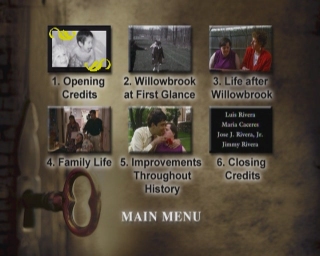 Seen above, the lightly animated menu designs are basic and easy to navigate. The 56-minute main feature has been divided into a scant 6 chapters, while no obvious layer change was detected during playback. This one-disc release is housed in a standard black keepcase and includes no inserts of any kind.

Bonus Features
There isn't a great deal of extra material, but what's here fits in nicely. The main attraction is Geraldo Rivera's original 1972 exposé "Willowbrook: The Last Great Disgrace" (27:31), which is referenced visually several times during Unforgotten. Those generally unfamiliar with the story are encouraged to watch this before the main feature, as it establishes a suitably formidable tone almost immediately. Plenty of unsettling visuals are on display here, but they're necessary elements to why Unforgotten was produced in the first place. Also included directly after this exposé (though not advertised on the packaging, oddly enough) is a 1982 ABC News Special (26:33) featuring lengthy retrospective comments by Rivera and a thorough update of the changes that had---and had not---been made since the original broadcast of "The Last Great Disgrace". Both TV specials are in predictably rough shape, but they're still quite watchable.

Also included is the film's Trailer (2:02) and a few advertisements for viewers to get involved directly. These bonus features are presented in a mixture of 1.33:1 and anamorphic widescreen formats; unlike the main feature, Closed Caption support has not been provided here. This isn't terribly surprising, but it's a disappointment nonetheless.

As a follow-up to Geraldo Rivera's 1972 exposé "Willowbrook: The Last Great Disgrace", Unforgotten feels a bit underwhelming in direct comparison. It's not that the updated Willowbrook story isn't worth telling, but Unforgotten's paint-by-numbers execution doesn't exactly make this a riveting 56-minute experience. In any case, City Lights' DVD package isn't a bad effort, featuring a passable technical presentation and a few appropriate bonus features (including the 1972 exposé, of course). The sticker price is a bit high for less than two hours of content, which will undoubtedly keep many potential viewers from making a blind buy. Nonetheless, Unforgotten is worth a look for interested parties, though on somewhat of a limited basis. Rent It.